The only adventurous thing I did this winter was to take this photograph of the first snow fall on January 14 at 3.45 am.  It wasn't much to talk about. 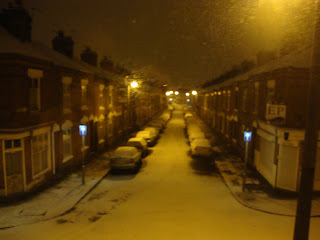 Then it came down with a vengeance on 18 January.

Wonky knees and chilblains  got the better of me and I opted for indoor activities only.

So I raided the spouse's stamp collection. 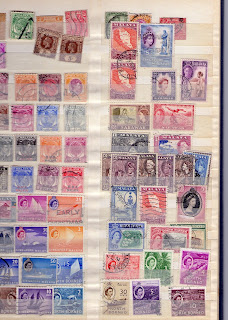 This one I found most interesting - the tiger of the Federated Malay States. 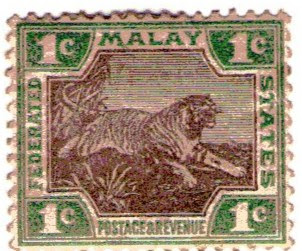 Wow!  Was there ever such an entity - The Malay States??   Looking at today's analysis of  Malays , Malaya and Malaysia, one would think that the Malays were immigrants like everybody else, that they had just come down from the trees and possessed no political , economic or social structure worth mentioning.  Furthermore, it took the British and others to show them how.

There was of course the overlord, the English King : 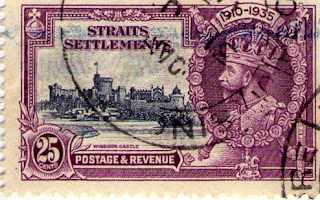 But there also existed the Malay Sultans: 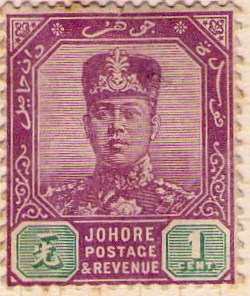 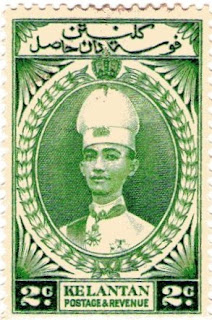 ........  and way back in those days Jawi was an acknowledged script.  During my colonial education in Singapore in the 1950s, I was given hardly 3 years of Malay language education in Rumi - much less in Jawi.  However my Chinese and Indian classmates were taught their language in their script.

Still, I musn't grumble too much or I may be branded an ultra-Malay fanatic.

However I did make very - and I must emphasise - very small efforts to brave the snow.  You can find pictures of beautiful snowscapes anywhere in the papers and on the screen.  But you'll never see anything like these.

But the most unkind cut of all was this.  I trudged through the snow (on the bus) to get an electric under-blanket for the bed in the bolt-hole.  But after unmaking the bed and fixing the under-blanket and then making the bed again, I was ready to plug it in - only to discover this.

Goodnight  and have a lovely weekend.

Puan
Made in China.Not a SilentNight after all.

You make me laugh - a shivery brrr laugh.

Auntie, when it comes to electronic stuff we have stopped buying anything 'Made in China" for a few years now if we can help it. Willing to fork out extra for better quality stuff. Its worth every penny and leaves one a lot happier. Sis n bros and cousins have gone the same way too.

Many thanks for your comment. I'm afraid we have very little choice here.
You won't believe this - but I took it back to Argos and they gave me a replacement AND it failed to heat up at all. I got a second replacement and it turned out to be another lemon. I gave up and just resort to the hot water bottle instead!

Tomorrow I'm getting my money back and perhaps look for another - Made in Mars!

At least they gave you a money back guarantee.

Believe it or not, I have the same stamp collection as your spouse - all purchased from an antique shop in Birkenhead back in 1989. Nice to know there's a like-minded person out there!

Too bad that today's children are no longer into stamps. They dont know what they are missing out on.

Thank you Ali AS, Kak Teh and Ulat,

Apologies for the belated response. This time winter has not been very kind to this tropical flower - the bunga tahi ayam.

Yes Ali AS, I got my money back - after 4 trips to the shop. But one has to be thankful for small mercies.

What am I to do with you? Like my mum used to say: Kalau kepala tak melekat ke leher, mesti hilang juga.

It's great to know that you're interested in stamps as well. In 1989, you must have payed a bomb for those stamps. Iain started his collection from the 1960s!

I'm more interested in old postcards from Malaya and Singapore but I stopped buying as of 1990 because they were just too exorbitant. The reason? The dealer told us avid Singaporean
collectors were pushing up the price!

Good to hear from you.

AsH, My late grandmother was less gracious but let me not turn the air in this blog blue...pls do asap..I want to come and see you. Its been too long.