What a good start for 2013.  We have been accorded the status of  Best Value Country in today's Daily Mail in an article by Jill Reilly.  Other  'valued' countries include Ecuador, Nicaragua, Panama and Mexico.

But this news is old hat.  Singaporeans have savoured this boon for the last 30 years or more.  While wealthy  Indonesian Chinese R&I  (Retire and Invest) in Singapore, Singaporeans do the same  and happily tweet  'çheep, cheep'  in Johor Bahru and Johore and Penang and Kuala Lumpur.

The only difference is this:  the West - and I am speaking about Britain mainly - are finding that they cannot afford the expense of looking after their disproportionately  high percentage of over 65s  ( as in Singapore too) .  Putting up the old folks  in a retirement home costs the minimum of  about GBP500 per week.  This would have to come from the State, or the loving children will  have to forego their inheritance of  mater's and pater's property and investments.

There is however another dimension to the plight of old people in UK.  This was  highlighted in the retirement speech of Rowan Williams, the Archbishop of Canterbury, to the House of Lords on 15 December, 2012.  He bemoaned "the contempt towards older people"and how this was "fostering verbal and physical abuse " of the older generation.

However, before estate agents  and other servicing agencies in Malaysia get too excited about the 'migration'  of  pensioners who seek a decent life on GBP612  ( MYR2986 ) a month - minus alcohol - I hope they are aware of  Jill Reilly's last paragraph in that write-up.

" But Malaysia's human rights record has come in for international criticism - internal security laws allow suspects to be detained without charge or trial."

Oh dear, oh dear how do we shake off this black mark?  These agents could proclaim -

" We can inform our potential clients of these redeeming factors: we have had no history of dictatorship and civil wars and natural calamities (as in Nicaragua),  we are not a transit point for smuggling drugs and illegal immigrants to the US (as in Panama) and we do not hold the record of having the "highest rates of kidnappings in the world" (as in Mexico).  All these countries, especially the first two - and Ecuador - live mostly in poverty.

In fact, Madam and Sir, we have quite a high standard of living here - but we do wonder how we can manage this and also enable foreigners to live cheaply in Malaysia.  Of all the countries in Southeast Asia, we wonder why Singapore, Indonesia, Thailand,  and the Philippines were not chosen.  And furthermore, dining out in this country excludes alcohol - which is certainly not a plus factor for westerners!

And as for our Human Rights record - we are not really that terrible but we do have a little old lady here who could enlighten and assure you that where human rights are concerned, it's not that much different from living in Great Britain."

The old lady will refer mainly to information from Human Rights Watch although there are many details and instances of human rights abuses in Britain which are given short shrift in official records.

Secret  Court  Hearings.  The  British Parliament began debating the Justice and Security Bill on 18 December 2012.  "The Bill will widen the use of secret hearings (my emphasis) in the civil courts on national security grounds, excluding the person affected and his or her lawyer from the courtroom.  Such hearings would undermine a basic principle of justice: the ability to know and challenge the case against you.  Parts of the judgement in the cases would also be kept secret.

It was quite a selective stop and search because Asians and blacks took the brunt and most of these searches were carried out in London in the areas of Muslim communities. It's hard to tell whether they were picking on Muslims specifically because religion is not recorded during these searches.

Intelligence Cooperation with Countries that Torture.  France, Germany and the United Kingdom have been using intelligence obtained under torture in their 'war on terrorism'.  This goes against the EU's anti-torture guidelines.  Such victims include Djamel Beghal tortured in the United Arab Emirates and the information derived was used to convict  him on charges of terrorism in a French court.

UK's Counter Terrorism Policy  Although the pre-charge detention order in terrorism cases was reduced to 14 days  in early 2012, the Government reserves the right to reinstate the 28 day detention order.

International Labour Organisation (ILO) Convention on Decent Work for Domestic Workers .  UK rejected the recommendations.  "Changes in immigration rules have made it harder for foreign domestic workers to leave abusive situations without losing their immigration status.  Women claiming asylum on gender- related grounds are detained " and not given adequate time to prepare their claims and obtain medical evidence.

Death by Remote Control  The November 2012  HRW Report, "Losing Humanity: The Case against Killer Robots " noted concern about the use of drones, for example , in killing civilians.  There are tons of material on this cowardly and brutal killing of civilians in Pakistan and Afghanistan.  This is Britain's contribution.

1.  The Taranis (below) , a United Kingdom combat aircraft, was unveiled in 2010 .  It was designed to attack targets "even in another continent".  By the way,  'Taranis' is  the Celtic God of Thunder to whom human sacrificial offerings were made.  (And  they mocked the Mayan end-of-the-world prophecy).  This is a robot- aircraft that murders without inflicting damage and pain to the man or woman who presses the button. It's described as an autonomous weapon, a UAV (unmanned aerial vehicle) enabling the perpetrators to execute without getting blood on their hands. 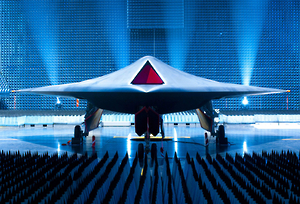 The United States is undoubtedly the leader in this super killing machine business.  However other countries - "including China, Germany, Israel, South Korea, Russia and the United Kingdom .. are also involved."  We can look forward to full autonomy for weapons within 20-30 years and maybe even sooner.

It's regrettable that Human Rights Watch resorts to the same language of the countries that they are monitoring by describing these barbaric aircraft as "autonomous weapons ".  A 'hurrah' word which means self-governing and free to act independently has been hijacked to whitewash such savagery.

Beautiful Guitar play in this video - one of my top favourites.
Posted by anak si-hamid at Friday, January 04, 2013