9.  With the Arab nations more or less emasculated by this time and the breakup of the USSR following Gorbachov's Glasnost and Perestroika in the late 1980s, Yasser Arafat and the PLO were now on their own.  The Russian Army had to withdraw from their 'adventure' in Afghanistan (1979-1984) and the symbolic fall of the Berlin Wall in November 1989 left the world with only one superpower.  This strengthened Israel: now with guaranteed support from secular and Christian Zionist US, it had a freer hand in the Middle East.

The Uprising or the First Intifada against the Occupation of Palestinian territories went on between  1987 - 1993.  It was basically a battle between Israeli tanks and Palestinian stones.  Despite the imbalance in military might between Israel and Palestine, Israel had no problem in winning the hearts and minds of the western media.  It was very easy for Israel to get moral support following "attacks" by Palestinian "terrorists" on its citizens at home and abroad.  Such "incursions" on the health and safety of the Israelis were picked up by the Western media to demonise not just the Palestinian cause but Islam as a whole.  Israel's brutality in the Occupied Territories went unnoticed.

But if we look back in history, is there really any  difference between the Palestinians' tenacity to fight against  Israeli occupation  and Britain's determination in the Second World War when the Nazis got close to their doorsteps and  they lived in fear of German occupation? 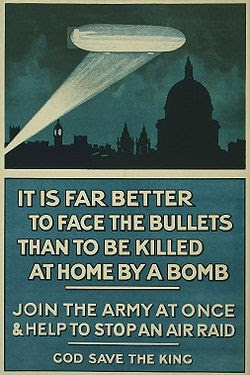 Let us not ignore the truth among ourselves ..... politically we are the aggressors and they defend themselves ...... The country is theirs, because they inhabit it, whereas we want to come here and settle down, and in their view we want to take away from them their country.
(quoted in Chomsky: Fateful Triangle, p. 91-92)

Israel should have exploited the repression of demonstrations in China, when world attention focused on that country, to carry out mass expulsions, among the Arabs of the territories.
(quoted in the Israeli journal Hotam, Nov.24,1989) 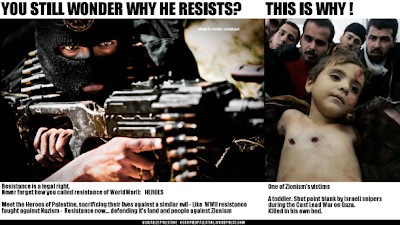 10.  Arafat and Yitzak Shamir signed the Oslo Accord in  1993.  The Israeli PM was soon after assassinated by an  'extremist' Israeli for signing the peace treaty.


11.  Then in 1994, another domino dropped out.  Jordan signed an agreement with Israel.  Also in this year Dr Baruch Goldstein, a New Yorker  Jew, went on a killing spree and shot dead 29 Palestinians at prayer and injured 125 at the Ibrahim Mosque in Hebron.    He was not at fault, of course: he was of "unsound mind".


12.  The Second Intifada  (2000 - 2005 )  witnessed a marked escalation of violence.  It saw a tit-for-tat sequence of attacks and counter attacks.  Suicide bombers, hand grenades, light arms, and Qassam rockets were pitted against Israel's tanks, tractors, helicopter gunships and (from May 2001) warplanes - last used in the 1967 War.

Palestinians called this the Al Aqsa Intifada, because it was provoked by Ariel Sharon's "visit" to the Temple Mount.      But it was more than a visit:  it was a provocative act on Sharon's part to "assert the rights of all Israelis to visit the Temple". He came with his Likud Party supporters and armed bodyguards.    This triggered the 5 years of bloodshed in the West Bank, resulting in the deaths of 1,053 Israeli civilians and 4,789 Palestinians(according to Israel sources).      (Sharon, of course, was no stranger to dirty work: about this time, the Kahan Commission declared him responsible for the massacre at Sabra and Shatila.   He resigned as Defence Minister only after an Israeli died during a demonstration against his policies).

As part of Israel's reprisals during this Intifada  ( Israel described it as "Operation Defensive Shield" ),  the refugee camp of Jenin in the north of the West Bank was invaded in April 2002.   The BBC reported that ten percent of the Camp was  'virtually rubbed out by a dozen armoured Israel bulldozers'.  Many residents, given no warning, were buried alive.  According to Human Rights Watch, 4,000 people, a quarter of Jenin's residents, were left homeless.

The death of Rachel Corrie ( an activist from the US)  run down by an Israeli bulldozer in 2003 hit the world's headlines, a story that did not go down well for the Israelis.  But there were also other fatalities like 57 year old wheel-chair bound Kamal Zugheir who was shot and then flattened by IDF tanks and the quadraplegic Jamal Fayid who was crushed to death in the rubble of his home when the IDF bulldozer refused permission for his family to attempt a rescue.  I can imagine the media's attention if they had been Israelis.


In 2004, Yasser Arafat died from a sudden illness - a big loss for a people who had depended on his leadership for three decades.     It was claimed that he was assassinated by poisoning - but it took eight years before this was taken seriously and Arafat's body was exhumed for tests.     (As for Ariel Sharon, he has been in a coma since January 2006).

This period also saw the break between the Palestinian Authority and Hamas.   A political fracture between the Palestinians was perhaps an expected consequence of a people, a country and an economy broken apart by wars and siege, and subjected to massive outside interference.     Hamas won the 2006 General Election in Gaza, but their democratic victory only sparked outrage and sanctions from the Americans and Israelis.


13.  Closer to our memory is Operation Cast Lead of  2008/2009,  which used as its justification  rockets fired into Israel from Gaza.

But it is worth noting that just two months before this began, a crucial piece of legislation became the law in the US.    In October 2008, George Bush signed into law the Naval Vessel Transfer Act.  Behind its modest title, this Act had a momentous significance for Israel.  It placed every US President under a legal obligation to ensure that Israel maintains its military dominance in the Middle East.  Giving Israel its "Qualitative Military Edge" had been US foreign policy for at least 40 years - it had now become law. Where does that place President Obama?

The following graphs and image  illustrate the actual danger the Israelis were facing. 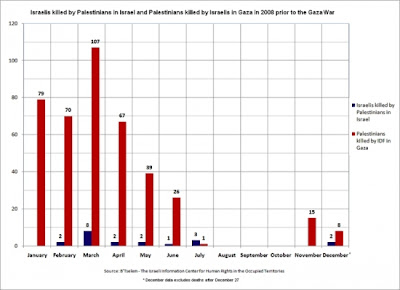 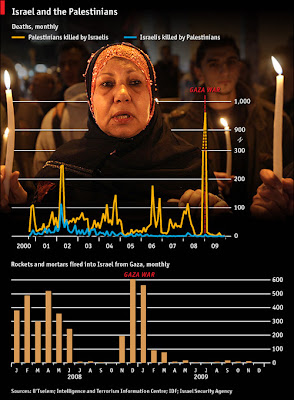 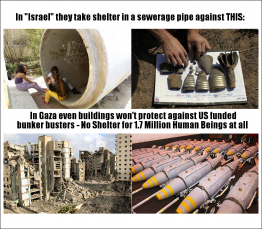 The impact on Gaza and her inhabitants was designed to be brutal and the viciousness of the Israelis was too much for even some of her allies and sympathizers.


14.  Then in November 2012 came Operation Pillar of Defence.  Again a brutal response to rocket attacks from Gaza but not before Israel had broken an informal ceasefire by assassinating Hamas military commander Ahmed Jabari on 13 November 2012.  According to Israeli peace activist Gershon Baskin, Jabari was murdered just hours after he had received the draft of a permanent truce agreement with Israel ."

To punish their enemy, the Palestinians may blow themselves up as well - and sometimes innocents are caught in the event.      The Israelis are masters of the same objective, but with a very different modus operandi - and with far greater "collateral damage".    From the 1950s  to the 2010s, Israel's Mossad and other security agencies assassinated 78 people - mainly Palestinians -  in Palestine itself or overseas.  But thousands of others - in Gaza especially - have been the innocent "collateral damage".      But in the language of drone warfare, such innocent victims are mere "bug splats" - the Israelis, after all, view the Palestinians as  "cockroaches", to be squashed out of existence.

Israeli contempt for the Palestinians is unconcealed.    Israel's Deputy PM and Foreign Minister said, "We must blow Gaza back to the Middle Ages."

However, Ariel Sharon's son Gilad put it more eloquently,  "We need to flatten all of Gaza.  The Americans didn't stop with Hiroshima.  The Japanese weren't surrendering fast enough so they hit Nagasaki too.  There should be no electricity in Gaza, no gasoline or moving vehicles.  Nothing."

But these attacks are not all.  Palestinians are also victims of what Twain described as 'The Long Terror' of sanctions, blockades - especially for Gaza where essential medicines, food and educational supplies and fuel are still arbitrarily subject to Israel's whims.

The details can be seen here. 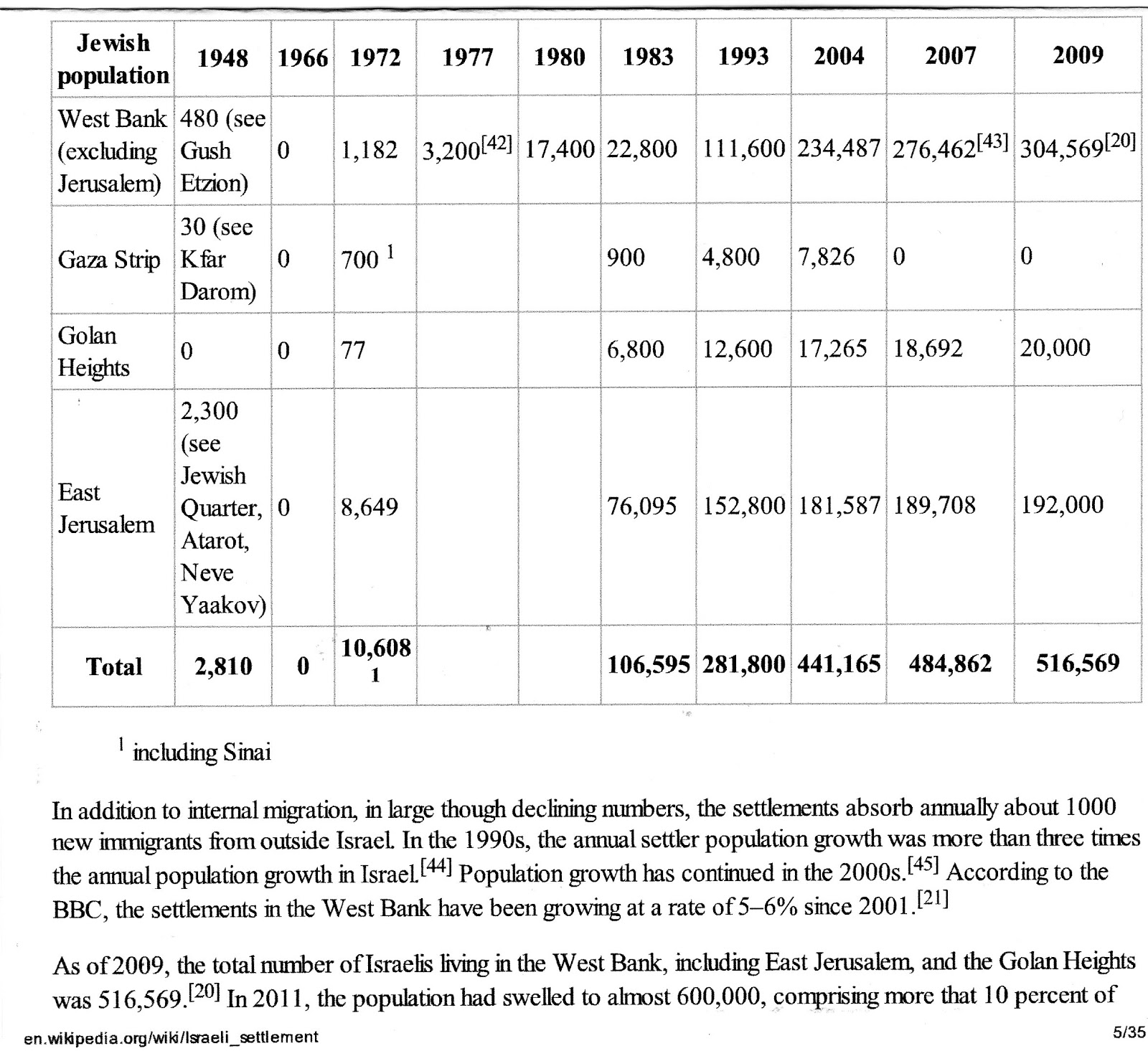 According to Ariel Sharon in 1989,  "Everybody has to move, run and grab as many (Palestinian) hilltops as they can to enlarge the (Jewish) settlements because everything we take now will stay ours  ..... Everything we don't grab will go to them." - same source as the earlier Sharon quote. 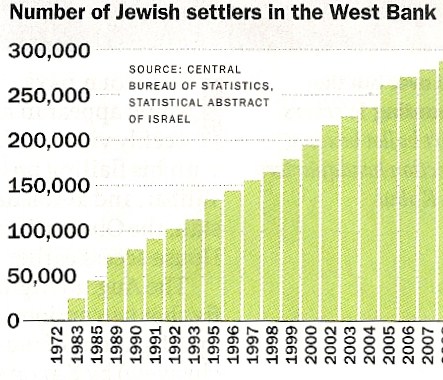 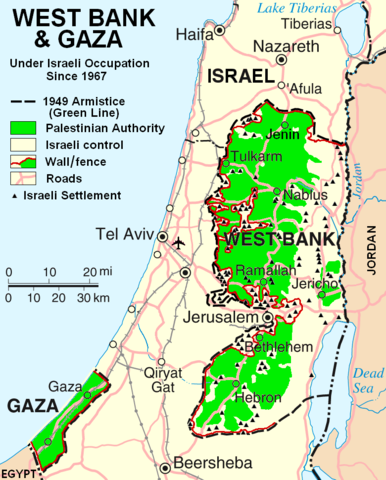 In the above map, firstly note the little black triangles which represent illegal Jewish settlements in the West Bank.

Let me end with the Apartheid Wall  in the West Bank - indicated by a red line in the map above. 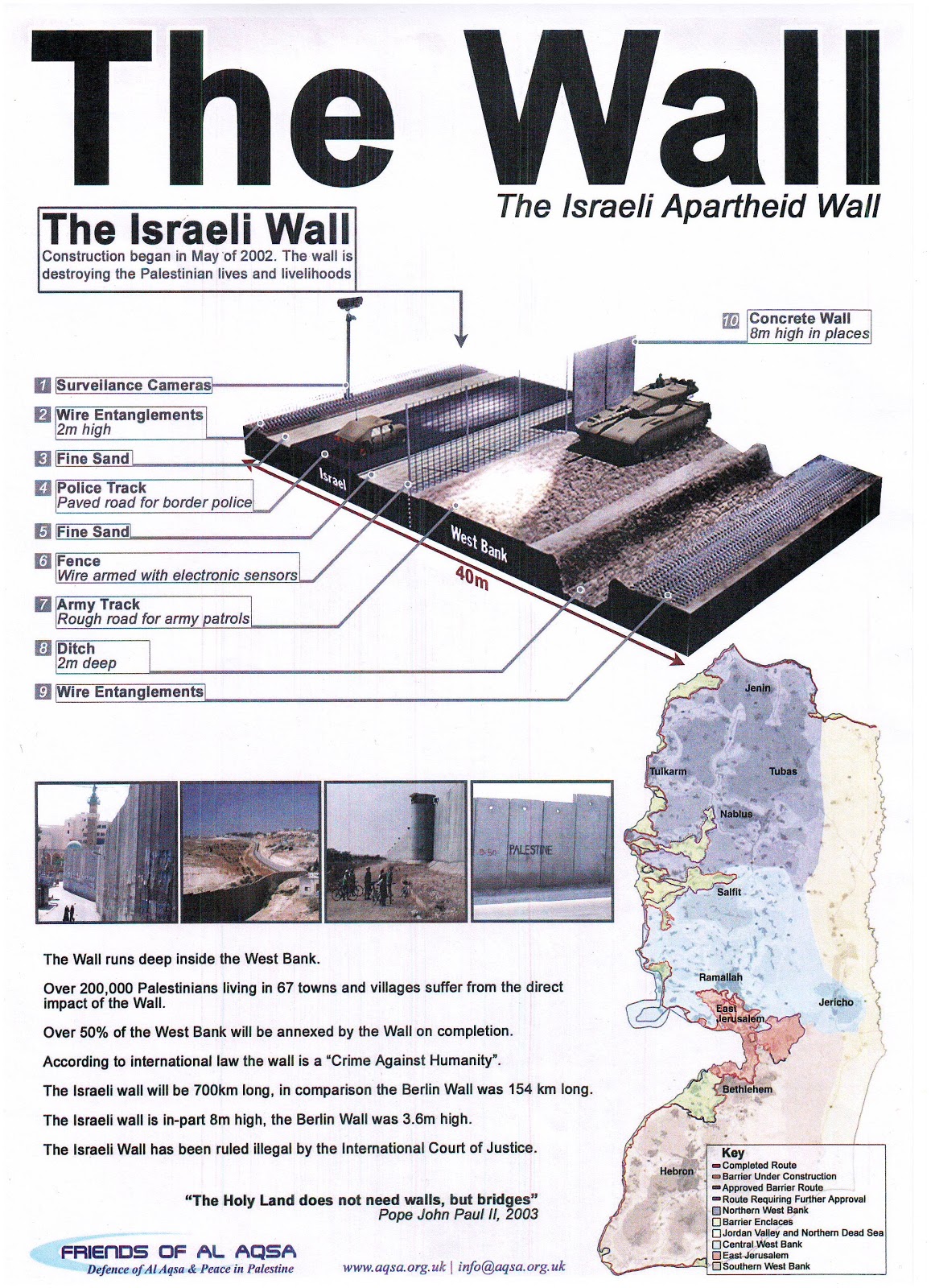 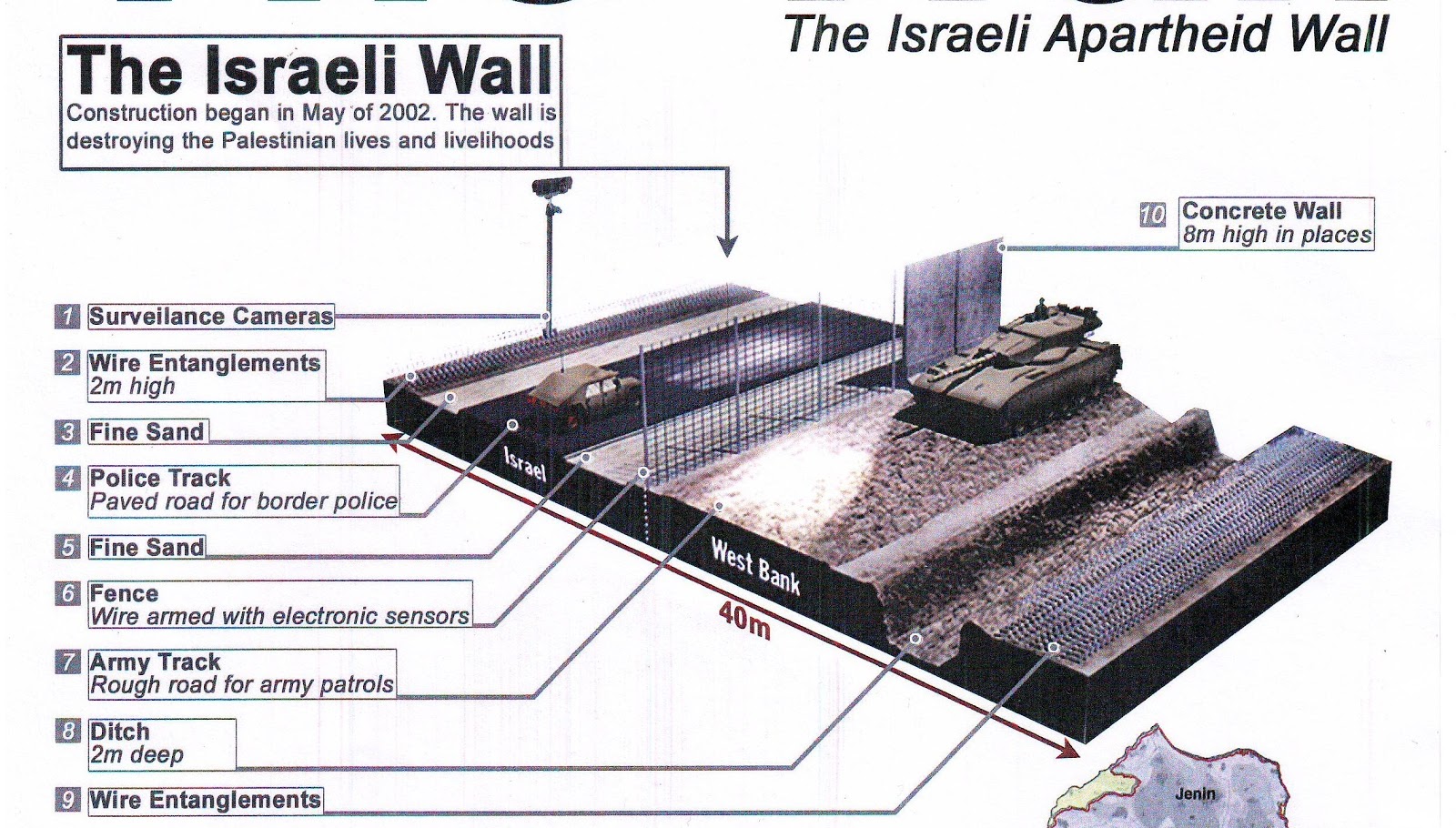 The Wall is more sophisticated than the old-fashioned barbed wires and serves the purpose of corralling the Palestinians in the West Bank in the world's largest prison.  Palestine is not even a single territory - it is now a poignant collection of divided and helpless pieces of humanity.

We are always asked to remember, and rightly so, the holocausts of the past.  In the same way we should not turn our backs on the Palestinians' Long Terror.  After the bloodbath in Gaza in 2008/2009 we made a little extra effort to find ways to beat this terror.    But we must try much harder.

So I'm posting this video by Lowkey an activist (recently retired) of mixed English and Iraqi descent.  I hope his style and his lyrics will knock  some reality into the minds of our cosy, comfortable youngsters.

Unlike Israel, no one will sponsor the Palestinians with US$7 million a day.  But if each Muslim adult in Malaysia would donate MYR2 each year and every year, we could see more hospitals and schools and public amenities constructed in  the West Bank and Gaza. After all, a drink at Starbucks and a basic burger and fries at MacDonalds cost more than MYR2.

I would also hope that the young ones in my family in Malaysia  (for whom I am writing this post) will make this little effort.  I know that my niece Maria gets her children to donate a portion of their Duit Raya to orphanages in Kuala Lumpur.  It would be wonderful if cucusiHamid could get cicitsiHamid to do the same for the children of Palestine.

And if this gift is multiplied by another 100 children, 1,000 children and so on - and together with their parents' contribution - then indeed we abide by our Prophet's pbuh  call.

None of you will have faith until he wishes for his brother what he likes for himself.

Cicit si Hamid had started their contribution for the children of Palestine during the recently held KL War Crimes Hearing on Palestine at PWTC. And for that, the eldest Cicit si Hamid was thanked by a very pretty girl manning the box ..!

Ariff made a good choice and decision. But keep an eye on which counter he goes to, next time.

Thank you mother of five.