The terms of the 1947 Balfour Agreement as seen in Map 2 shows how 56% of the land was handed over to the Jews.  Of course the Palestinians and the Arabs disagreed: how could any country or institution have been allowed to carve up Palestine and "give it to some Eastern Europe and Russian interlopers"?

According to the Agreement Jerusalem was recognized as an International Zone.  As we have seen in later years this would be ignored by the Israelis.  In 1967 during the Six Day War, Israel "captured" east Jerusalem and later squeezed out the Palestinians by Land Grabs and building more settlement.

In 1980 Israel unilaterally issued the Jerusalem Land Proclamation and declared a complete and united Jerusalem as the capital of Israel.  Of course, despite squeals and whimpers from the "International Community" Israel cocked a snoot at any voice of opposition - whatever Israel wants, Israel gets.  As for West Jerusalem there were "broader agreements regarding Israeli presence in the West - whatever it means - again it benefited the Zionists despite the 1947 ruling.

It has long been the mantra of the Zionists and their apologists that "Arab forces moved to destroy the newly declared state of Israel".  This is a claim described by Robert Fisk as 'self-delusional'.  In fact the war was primarily a Zionist - Jewish colonial project ....... 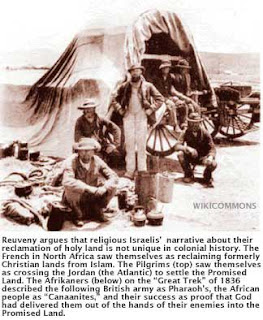 The main trigger of the 1948 Palestinian Exodus was the Deir Yassin Massacre, which is often described as the initial prong of the colonial project against the Palestinians : altogether, 107 men, women and children were massacred by Zionist paramilitaries, after first being paraded through the streets of West Jerusalem.

But in the West (and in our part of the world) at least, we don't hear about the tragedy at Deir Yassin.  Or, for that matter, the massacres at Khan Yunis and Rafah during the 1956 Suez War.  Instead we are told a lot about  the Massacre at Munich in 1972 and the Entebbe Hostage Crisis in 1956 and many other 'harrowing atrocities' the Israelis suffered.  Palestinians after all, do not qualify as 'victims'.

And yet in 1948, all told, 750,000 Palestinians were driven from their homes and their land - many would come to live permanently in the squalid refugee camps of Lebanon, Jordan and Gaza.

Reading such accounts, from those who should know, makes it all the more important for us to realize that there has always been a guiding strategy, a philosophy of expansion and occupation, behind what Israel does.

And Ariel Sharon, Foreign Minister of Israel said this while addressing the meeting of militants from the  extreme right-wing Tsomet  Party, Agence France Presss, November 15, 1998 :

It is the duty of Israeli leaders to explain to public opinion, clearly and courageously, a certain number of facts that are forgotten with time.  The first of these is that there is no Zionism, or Jewish state without the eviction of the Arabs and the expropriation of their lands.

4.  The  1956 Suez War was revealed - later- to be a plot by Britain, France and Israel whereby Israel invaded Egypt and made sure they went just far enough for Britain and France to enter the fray and ostensibly save the Canal from Nasser's nationalisation.  They made one mistake.  They did not inform Big Brother USA and they had to withdraw.

5.  The 1967 Six Day War ( 5-10 June) started when Israel launched 'surprise'attacks against Egyptian airfields and the West Bank which was then under Jordanian control.  Within six days Israel conquered  the Gaza Strip and the Sinai Peninsula from Egypt, the West Bank and East Jerusalem from Jordan and the Golan Heights from Syria.  In the West Bank nearly 300,000 refugees fled to Jordan and the Palestinians were left with only 22 % of the land.. The West Bank became "The Occupied Territories".  Jerusalem was divided and the Land Grab in Jerusalem now began in earnest.  This was another phase in the displacement of the Palestinians - their Diaspora.

The upshot of this was that a pre-emptive strike against another country was seen to be acceptable.  (Remember how Saddam Hussein's invasion of Kuwait led to the 1990 Gulf War?)   This gave immense confidence to the Zionists.  They were able to initiate strikes, to extend their territory and to get away with it - because the US and the West were on their side.

According to some sources, in June 19, 1967 the Israeli Government decided to return Sinai and Golan in return for peace agreements with the Arab states.  It seemed that US withheld this decision from Egypt and Syria.  In September 1967 the Khartoum Arab Summit issued the statement there would be no peace with Israel.  The decision of 19 June 1967 remained a closely guarded secret.

This issue of the return of territory was to lead to another war in 1973.

Discord over the return of territory lost during the Six Day War was the main reason for the Yom Kippur War between Syria/Egypt and Israel.  It went on from 6 October to 22 October.

This war was intertwined with the Cold War between the two superpowers.  The USSR supported the Arab nations against Israel which was regarded as the Trojan Horse of the US in the Middle East.

The machinations of the two superpowers played a major role in the game play of the war.  To cut a long story short, Kissinger in the USA played an enormous part in propping up Israel.  At this time President Nixon was embroiled in the mess of the Watergate Scandal. When Israel encountered the possibility of defeat on 9 October and raised the threat of using nuclear weapons to prevent defeat, the US (as expected by Israel) put into motion Operation Nickel Grass to re-supply and re-fortify Israel's military capability.  The threat of nuclear weapons was just an American and Israeli device to arm the latter to its teeth - estimated today to be in the region of US$7 million a day.


7.  In  1978  Israel and Egypt signed a peace agreement.  The Sinai was returned to Egypt in exchange for  Egypt's recognition of Israel.  It also defined Egypt and Mubaruk as a poodle of the US.

"I saw dead women in their houses with their skirts drawn up to their waists and their legs spread apart, dozens of young men shot after being lined up against an alley wall; children with their throats slit, a pregnant woman with her stomach chopped open, her eyes still wide open, her blackened face silently screaming in horror, countless babies and toddlers who had been stabbed or ripped apart and who had been thrown into garbage piles."
This report did not come from the pen of an Arab or a Muslim.  It was written by Janet Stevens, an American journalist.

And have our children and grandchildren had the privilege to watch on screen the story of the Sabra and Shatila Massacres?  Everyone's in it :  Jews, Christians and Muslims - a perfect scenario for a blockbuster movie  like 'Schindler's List'.  I guess it's because it is not the right sort of victims and the wrong kind of perpetrators.  The movie will not sell !

.......  to be continued.  But first spend some time with George Galloway,  a man who puts his money where his mouth is unlike so many of our fellow Muslims  -  Arabs and non-Arabs.  And he's a Scotsman too!