When we got back two weeks ago - among our mail was this appeal from MAP or Medical Aid for Palestinians. 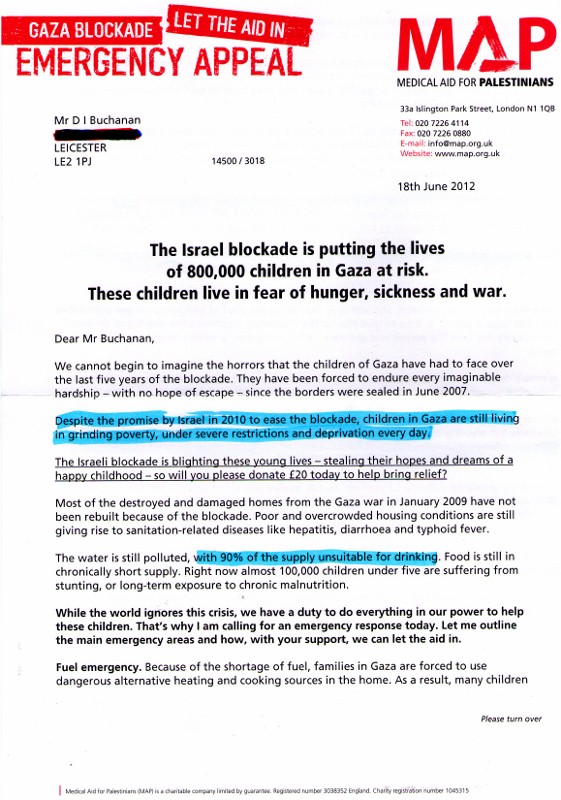 "Despite the promise by Israel in 2010 to ease the blockade, children in Gaza are still living in grinding poverty, under severe restrictions and deprivation every day." 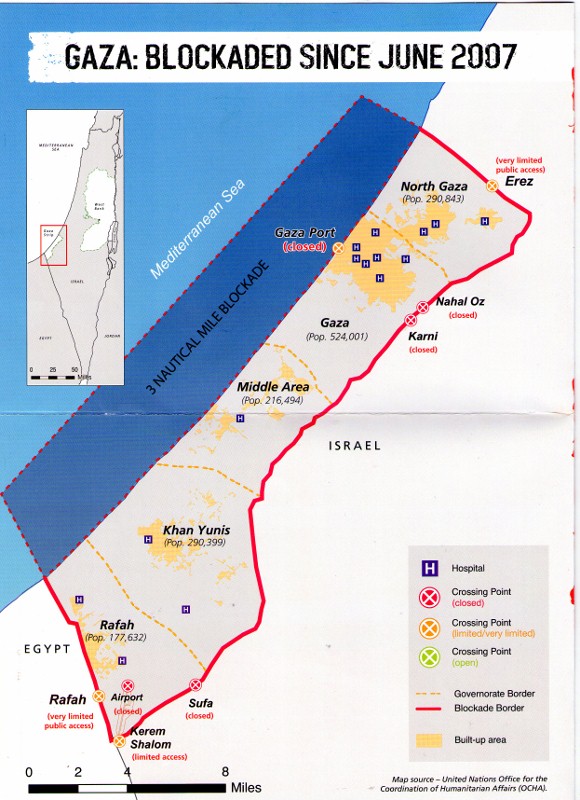 They
The map illustrates the Access Points that are closed:  Gaza Port, Nahal Oz, Karni, Sufa (on the east bordering Israel).  Imagine how Britain would suffer if the ports of Southampton, Portsmouth were closed to trade. Of course,  the well-heeled  could depend on Heathrow and the other airports. As for Gaza, even the Airport is closed.  As for the border with Egypt to the south, Rafah is open but with very limited public access.  A few years ago enterprising and desperate Palestinians dug a tunnel into Egypt to get food and medical supplies.  But the Egyptian government under Mubarak  sealed the tunnels at the behest of their American and Israeli allies.

"Gaza has been a virtual prison since June 2007.  It is a space no larger than the smallest county in England with over 40 times the population - who are denied the most basic of human rights - the right to health." 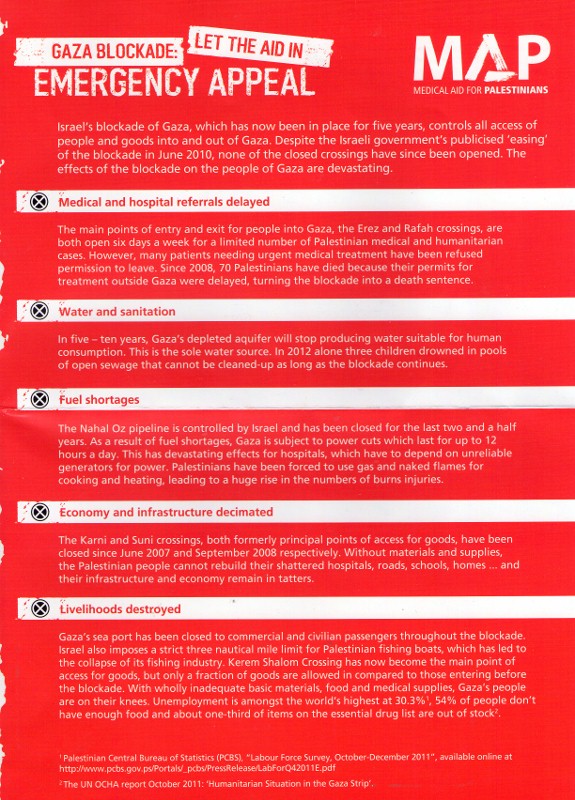 Here are the gory details enlarged from the above.

"Since 2008, 70 Palestinians have died because their permits for treatment outside Gaza were delayed, turning the blockade into a death sentence."

Just imagine, if Israelis  who require medical treatment in UK and USA and France were obstructed by a blockade!  If that ever happens pigs will fly!

Imagine the scenario if  by some divine intercession  ( man left to himself will not dare to do so), the supply of petroleum from the Middle East to UK, USA, Europe and Israel were cut off.   Like the Palestinians they will  "be forced to use gas and naked flames for cooking and heating, leading to a huge rise in the numbers of burns injuries."  And with Christmas just round the corner, they won't be able to partake of  Christmas dinner with roast turkey, roast potatoes, boiled sprouts and Christmas pudding to celebrate this Christian and western secular festivity.  Only liqueur and spirits ( no, not the ghost of Scrooge) will be plentiful.

"With wholly inadequate basic materials, food and medical supplies, Gaza's people are on their knees.  Unemployment is amongst the world's highest at 30.3%, 54% of people don't have enough food and about one-third of items on the essential drug list are out of stock."

The Brits remember - with pride - the Blitz when Hitler was raining bombs on their cities and blockading their supply of food.  Their venerable Churchill had this to say :

The Brits are respected for their tenacity.  Even though the odds against the Palestinians vis-a-vis the Israelis are far worse than the Brits against the Germans, the former are labelled as terrorists - standing alone as they are pulverized into the ground while the rest of the world look on and give succour to the brutal Israeli regime.


Then two weeks ago Israel conducted another campaign of "killing off  the weakest and unwanted"  another culling spree sanctioned by the newly-elected Obama and the UK government. And all because the Gazans have been pelting the Jews with their rockets!!

"The alleged tens of thousands of 'rockets'from Gaza killed 21 Israeli people since 2001.  During the 2008/2009 Operation Cast Lead, 1,300 Palestinians were massacred including 352 children.

That's another context to be considered.

This 2012 invasion will not be the last despite the so-called peace treaty.  Napoleon Bonaparte in 1802 said, "What a beautiful fix we are in now: peace has been declared."

Not in the name of Eratz Israel (Greater Israel) - no way.

Thank you for the information. I am using your posting to inform and educate my students . I hope you don't mind.

Do use the information - I'm pleased and privileged.

I'm pasting what a colleague of mine wrote about you. She got to your blog from my FB posting.

Farahezza Hairon Nizar :your sis rocks! I'm reading the blog and i'm spying on every pix! ;) truth to be told, the aaawwwwwwEST thing I've read so far is

Musty Sunny :hahahahahah...those old days....you might find some comical fotos of me there...in cowboy suit and ....hahahahah...all that
11 minutes ago · Like

Farahezza Hairon Nizar: i warn you, i'm stalking!LOOOL but really, your sis' writing is insane, it's so cool, she's a genius with the biggest heart!! the pixs?.. it's like walking down the memory lane-- they're Just too precious!! ;)
4 minutes ago · Like

Thank you Mus for that little snippet from your Facebook.

And to Farahezza Hairon Nizar, glad you like my 'insane and cool' writing. I don't think I'm quite a genius and even though I'm 68, I do try to reach that apex. But as for the heart I've got lots of room to spare.

And to show my good intent, look up May 2009 "The Frankie Avalon of Pasir Panjang..." Have a good hearty laugh on my bruvva.