The Romance of History (CsH)

This Examination Time Table shows the nature of the History Papers for the School Certificate. very telling of the times.  They were History of the British Empire and Commonwealth and History for Candidates in Malaya. 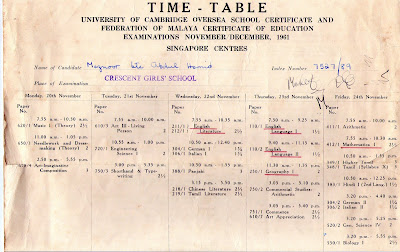 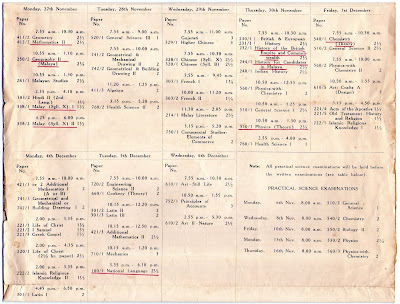 Earlier Primary School history was mainly made up of the history of English Kings and Queens and the achievers in the British Empire.   I recall how my my history and geography lessons throughout Primary and  Secondary School referred to the Peninsula -  what is now  West Malaysia -  as Malaya.

It was in fact a term manufactured by the British to 'create' an image of  a single political entity of the Straits Settlements, the Federated Malay States and the Unfederated Malay States.  Malaya not only referred to the indigenous Malays but also the non-Malay immigrants.  In this way the British did not have to account for the  nefarious (or otherwise) tactics and subterfuge they employed to take over the Peninsula and its resources - in the guise of bringing peace and prosperity to the country.  The 'treaties' they made with the Malay Rulers in their bid to expand their political control became mere details in this larger picture of developing Malaya for the 'benefit' of all.  Also their cynical policy of promoting the entry of millions (from China and India) of what in today's terms would be described as 'foreign workers' to 'develop' and enhance the Imperial coffers would be rationalised and  legitimised.

If the climate had been agreeable to them as in Zimbabwe (the old Southern Rhodesia named after the arch-Imperialist Cecil Rhodes) they might have set up permanent settlements in all the choice spots on the hills, in the most fertile areas or by the seaside and renamed the Malay Peninsula Rafflesia  or  Edwardia!

I have spent all week reading and digging into versions of the History of 'Malaya' from the 1920s to post-World War Two.  What a minefield it was.

The earlier narrators were mostly British and Australians; more recently they have included a number of non-Malays, some Malays, more Australians and now the addition of some colourful Malay fashionistas  (most  of them, it seems, emanating from institutions in Singapore).  With copious footnotes and citations and reference lists, they excel in presenting a linear history of pre-War and post-War British 'possessions' in the region.  Instead of Kings and Queens  it was all about Sultans ( emasculated and compromised - my description), Residents and Governors and High Commisioners.  There were the European Captains of Industry and Agriculture and Merchant Houses and their immigrant counterparts and the tale of how these were the people who made Malaya then and Malaysia what it is today.

They hold the view that  'the Malays might have lived in it (the Peninsula) longer, but no one had done as much to develop it as the Chinese'.  This point however, has to be considered.  Although "the vast majority (the Chinese) arrived as labourers, many soon found in the stability and order of  Malaya opportunities for demonstrating their entrepreunerial talents.  Becoming the largest element first in the urban centres and then in the country as a whole,they came to dominate the retail and commercial life of Malaya".  There were no barriers, no competitors , no hazards - success was almost handed on a plate.

As for the natives,  left on their own, the Malays would have remained backward serfs - a sweet but sorry looking lot of  Mats and Minahs who would happily dive into the sea for coins thrown into the water by the wealthy and civilized Others.  The context of Malay culture, political suzerainty, economic activity and  sustenance -  the existence of  Malay peasants and fishermen, small Malay craftwork and industry as well as regional and localised forms of political organisations were marginalised and ignored.  It seemed that the  Malays contributed almost nothing except to allow all and sundry to exploit and profit from the resources in  their homeland while they remained protected  and 'nurtured on subsistence-level' paternalism. Keep them quiet and sedated - that was the ploy.

Words like immigrants, bandits, terrorists, Emergency, communists, nationalists, freedom fighters and liberators  pepper the texts.  The 'left-wing intelligentsia' have done a good job in questioning the choice of words used by the British to describe the post-war insurrection by the Communist Party of Malaysia. Terms like 'bandits' to describe the Communists were later discarded because they give the connotation of MCP guerillas as being 'small fry' like pesky flies that can be easily swatted and worse, that could make them seem almost semi- heroic, like the Robin Hoods of Malaya. Certainly the ambitions of the MCP were stronger than that.

Now the word 'Emergency" was regarded as a typical British understatement of a critical situation.  It's a nifty word because it promises only a temporary hiccup. It also enabled  the owners of the plantations and tin-mines  to claim insurance  for their temporary losses.

But, most of all, this word 'immigrant' fascinates me. Here are its various meanings.

But the term 'immigrant', as used in texts concerning the history of Malaysia from the 1920s, is a misnomer.

In the first place, the large scale movement of Chinese (and Indians) into Malaya and Singapore was orchestrated  by the imperialists' hunger for cheap labour to work the tin mines and plantations, to construct the buildings, roads, railways and ports, to clear the jungles and later to be the clerks and petty bureaucrats (after a good dose of education in schools run by missionaries) and more importantly to play the role of middlemen traders and conveyancers of lucrative exports (especially) and imports with the cosmopolitan hub, to lubricate the wheels of imperialism.

Secondly they came as transients.  They did not come to settle permanently and  were not, for the most part, immigrants. They were foreign workers allowed entry and permit to make a living and for some fortunate ones, a fortune, by the British Colonial Rulers.  They were sojourners - making a temporary stay in a foreign country amongst people who were not of their culture.  They came to escape  poverty and unrest in their own country.  To 'balek Tongsua ' was a common attribute of the Chinese attitude when I was growing up in the Fifties.

Throughout the 1920s to the 1950s, and even after Independence, the Chinese ( except for some of the Peranakan) did not regard these British outposts as home.  China was their Motherland.  Up to 1948, the 2 million Chinese, many second generation born in Malaya gave their loyalty to their family, their clan and to China. The land of the Malai Kwai  (Malay devil) had no significance for them except as the goose that laid the golden egg.  Furthermore, China allowed them Dual Nationality enabling them to eat their cake and keep it as well.

Given such a background, it would be very glib to suggest that racially based politics began with the Alliance of UMNO, MCA and the MIC as of the 1957 Independence.  One could safely claim that it started between the 1920s and 1950s when the Kuomintang and the Chinese Communist Party competed for finance and support from Chinese coolies and taukehs and nationalists in Singapore, Penang and Malaya.

Among the notable personalities of this period was Sun  Yat Sen, memorialised as the Father of modern China in the Sun Yat Sen Museum at 65, Macalister Road, Penang and in the previously named Nanyang University at Wan Qing Yuan which 'has been preserved and renamed the Sun Yat Sen Nanyang Memorial Hall, and gazetted as a national monument of Singapore on October 28, 1994'.

Another notable personality is Lim Chin Peng.  Now there's a cry and a campaign to remember him as a kind of Father of Modern Malaya.

And this will be the subject of my next post.

Salute, AsH!
For so long, we've been duped by the Brits and had allowed them to define our reality according to their perspective ie Orientalism,mercantile capitalism, so on and so forth).
Now that there are simmering discontent against 'malignant' capitalism, and environmental conservation is an acceptable alternative, we should stop being ashamed and guilty of our eco-friendly lifestyle - communing with and preserving nature as the 'Lazy Natives' - and upholding political, economic and social systems that sync with our faith and beliefs.

Hi stranger! how are you? was back recently bbut kena jaga mak. How is abang leceister? will email. am the proverbial headless chicken at the moment. by the way, i love history.

Interesting comment about realities and lifestyle. You are so right - we have been led astray. The problem is our basic 'eco-friendly' lifestyle has for the most parts been forgotten by us and we have taken on the excesses and social ailments of the West.

At times we play up and make profit from our 'exoticism' - that part which the orientalists loved to highlight - and this is especially so in the tourist industry.

My dear Kak Teh,

How are you and the T-man? Hope your mum is ticking along fine. It must be worrying for you. I do know what it's like when you're thousands of miles away.

Abang Leicester is a new man with a new left hip but still the same MOG!

Take care and salam and love from us to you both.

And thank you for the visit.

Kakak Lecester, pls tell Abang leceister not to overdo it with new hip and all. No hip hop and no beak dance. He has been warned!! My T man is ding fine and heading your way soon. Will ask him to holler. Have you given up on sunny british shores? I am still here and still cant get over the fact that I gave you wrong dates to come to London!! Silly me! Come back...all is forgiven!

I had not choice but to love History as my e father was a histrory freak.. dates, names, events so precise.

And ya,
those days our History lessons mainly on Europe/China/India, so am very shallow with our own - even our school staged concerts were based on their history (once we did Marie Antoinette - Tunku Jossie even spoke in French!).

Thanks for these article, sure need to update.

should consider to have your work published as academic writing ... we need more of this kind of work.

wishing you all the best

Kak Teh, Katrina and KoolmokcikZ,

Thank you and please excuse me my tardiness.

There's nothing to forgive except what a good cup of tea and naga sari could do.

It would be great to see the T-man and we could sit down like a bunch of old fogies enjoying old songs from old machines.

InsyaAllah we hope to be back for mid-winter - cool man!

Aren't you lucky, having a father who loves History.

By the way, who played Napoleon? It must have been great fun making AND showing off the costumes.

As you can see, I'm a changed person. I believe in History, especially reclaiming our history.

Oh no, going into academic writing is "where fools rush in where angels never tread". I leave that to the professional historians.

As I wrote earlier, I just fancy reclaiming my people's history - of venturing into contexts and not just polemics and citations.