In the mid-1970s at London University I learned a new sentence.  Protest with your feet.  We had a lecturer who was a real skiver and waffler.  One of my classmates who was fed up with this character said,  "Why don't we protest with our feet?"  I looked a bit nonplussed and the chap sitting next to me said, "Walk out of the class!!"

University life in UK in the 1970s was ridden with layabouts, hash, and loads of protests.  Anything could be the excuse for demonstrations - from the Vietnam War to the price of beer.

One day while we were waiting for a lecturer (in this case, a decent teacher) to turn up, a couple of undergrads turned up at our door and suggested we all leave the class and join them for a demonstration.  Most of us didn't quite know how to react.  As I was the only foreign student in the class I told the 'instigators',  "I'm paying  a lot of money to study at this University and joining your demo would not serve me any good."

I must admit to being some sort of radical during my undergrad days at Singapore University. But that's the usual teething problems of youth. 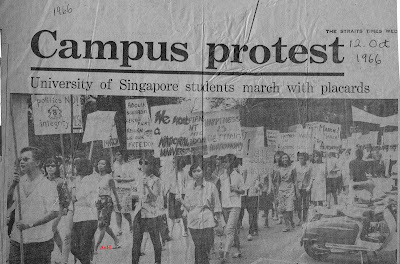 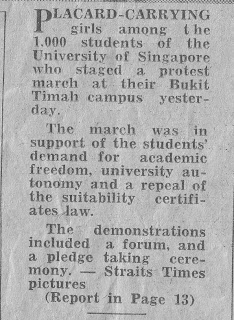 Looking at this, with me marching like a samseng  - 45 years later - oooh, how embarassing, how naive.  Disraeli's words :  "Youth is a blunder, manhood a struggle, old age a regret" come to mind.

Demonstrations and protest marches seem to be de rigeur for 2011.  After years and years of bloodshed and violence in the Middle East - and the resulting quagmire - the young and not so-young men and women in that part of the world are seeking an alternative.  For them the streets remain the only available arena.  The western world is not spared either - the loss of jobs, the cutback of services in education and health,  diminished pensions , and rising cost of living have forced people on to the streets to get their government to listen.

As an oldie I often discover scenes from the past to relate to the present.  This is from F.D. Ommanney's  Eastern Windows  (1960)

He was writing about the riots in Singapore when the Labour Party led by David Marshall, then Chief Minister of Singapore was battling for complete independence and full internal self-government  for Singapore.

..... meanwhile the Communists were busy in the Chinese schools.  There were schoolboy riots led by schoolboys well over twenty-one years of age, and inspired strikes which made people wonder where Singapore was going under its first elected Government......
At the end of 1956, about the time of the Suez crisis,there were more riots brought about by Chinese schoolboys.  The actual rioting was done by about three thousand hired trouble-makers, who mostly ran around smashing traffic-lights.  The vast majority of Singapore's million and a half people only wanted to be left alone to live their lives in peace......

There must be a lesson to be learned somewhere from that little episode from the past .  And  Ommanney had this to say about lawyers.  Of Mr David Marshall :

He was a very clever lawyer and a persuasive speaker who professed a loathing for the colonial system under which he had made his reputation as a lawyer.   In cases involving Asian individuals versus Europeans, or versus Authority, or versus Big Business he accepted briefs for the Asians and often won with dramatic displays of oratory.  This gift of oratory stood him in good stead during the election when he .....  thundered against colonialism, working himself into all the symptoms of towering rage.  It was an easy horse to flog.

Ommanney is a classic colonial who believed that rulers should be nominated, and 'not elected by voters who can neither read nor write and certainly do not understand what they are being called upon to vote for.'  Of course he would think this way - but I certainly do not agree that  people who are literate and educated  know what they're voting for.  Our friend and street cleaner Osman has got more of his wits about him where the politics of his country is concerned.  And he knows how his travel to work  from Puchong to Setiawangsa for him and his wife Aisha will be disrupted by the Bersih  campaign and make his difficult life even more trying.  All he wants is his freedom to  carry out an honest day's job peacefully -  of keeping the streets bersih !

But, I  heartily agree with Ommanney's view of  clever lawyers ... and 'easy horses to flog'!!

I like that Disraeli's words :
That Bersih protest does not look like it is going to be Bersih.. it may be di Sapu Bersih ;).
May we be doing something we know...

I was given that saying of Disraeli's by my cousin when I was just 16. Now that I've reached old age I still blunder and struggle!

As for Bersih, the organisers should consider themselves lucky to be Malaysian nationals.

Down south they would have been suffocated from day one.

And thank you for popping in Wan Sharif.

The Bersih "protest by feet" will be bad for Malaysia which ever way you look at it. To them the end justifies the means. It is good timing that the Agong has stepped in. It will create havoc and when the police come out to make some arrest, they will say police were brutal and cry to the whole world that malaysia is depriving its citizen of democracy! If the election process in malaysia were corrupted and unclean as they claimed, how do they explain the opposition winning in 5 states, including the "rich" states too? (selangor,Penang)?
This is truly a case of "bagi betis nak peha"...dah dapat 5 negeri, they aim for more, no matter what. The DAP is a slime, I tell you. They are like the PAP of singapork. They pretend to be "fair" to all races when in actual fact, they hide the intentions...they want power. They will not stop until one of them become PM. They are using this "race" card very well. They knoew the weaknesses of the malay and play it to their advantage. Same tactic was employed by LKY in old singapork...going into malay kampongs wearing a songkok and shake the hands of the malays and complement the ladies and their babies! As usual, the Malays were taken in by his antics and voted him in. So hypocrite. You can read more in barking macpie blog...

But most disappointing are the Malays like those in PAS and PKR who are willing to sleep with those who are like the dogs biting the hands that fed them.