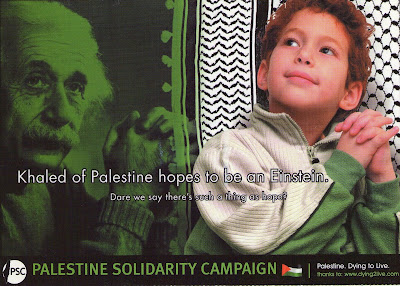 A Signpost to the Continuing Brutality of the Israelis in Gaza.
Items not allowed entry into Gaza: ' light bulbs, candles, matches, books, musical instruments, crayons, clothing, shoes, mattresses, sheets, blankets, pasta, tea, coffee, chocolate, nuts, shampoo and conditioner'. Israel claimed they allowed aid to come in but that is only 1/4 of the usual quota.

According to the UN Food and Agricultural Organisation (FAO) 61% of Gazans are "food insecure", a typical PC bureaucratic substitute for the 'poverty and hunger that dare not speak its name'. And if the Gazans can afford to buy their food needs and the supply is ample - which is unlikely because of the embargo - they would still have the problem of getting enough cooking gas because the amount allowed in by the Israelis meets only 1/3 to 1/2 of their requirements.

So, why can't the Gazans grow and produce their own food, setting up the poor man's version of the self-sufficient Zionists' ideal of the 'kibbutz'? Firstly the Gazans are prohibited from exporting their flowers, fruits and vegetables. Furthermore, the FAO says $180M of trees, fields, livestock, greenhouses and nurseries were destroyed during the Invasion. But here's a piece of good news. In 2010 the Israelis allowed the entry of 'potato seeds, eggs for reproduction, bees and fertiliser that could not be used to manufacture explosives'. Aaah, now they can have chips and chicken chops just like any restaurant in downtown New York or Tel Aviv.

What about electricity? Again the Israelis' blockade made sure that the Gazans suffer 30-65 hours of power cuts per week. What effect will this have on the remaining hospitals?
Before the invasion Gaza had only 133 hospital beds per 100,000 population, compared to 583 in Israel. Of course we have to be realistic - how can anyone expect the Gazans to be treated as equals with the Israelis? During the so-called Operation Cast (in) Lead, six hospitals were damaged 'including one that had a new building completely destroyed, another lost two whole floors'.

And why can't these lazy bounders reconstruct their buildings? 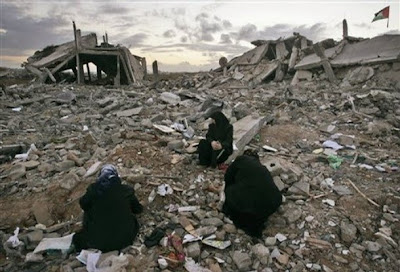 Not when there is a blockade on bringing in cement, concrete and wood, spare parts for machinery and other materials needed for rebuilding the infrastructure. 12,000 homes were destroyed during the invasion and schools for 15,000 new pupils could not be made.

There's a long litany of sufferings inflicted on the people of this beleaguered piece of Allah's earth by this 0.002% of the world's population. You can see here that size does not matter when you're armed to the teeth by the United States of America and the Judaeo-Christian nations in Europe and countries like Britain and Australia are always bending backwards to soothe the Israelis' hurt and constant pain of victimhood.

I salute the many generous and courageous men and women who risked their lives and limbs in their effort to break this blockade.

What happened to Mavi Marmara is typical of the high-handed and brutal tactics of Israel. We only get platitudes of regret and sickening hand-wringing by Friends of Israel. As for the UN, all they can muster is a diluted version of reprimand. If the UN shows such impotence to act on the inhumane blockade of Gaza how can we expect them to have the stomach to rattle the Powers who are Israel's minders?

And Israel knows that too well and Israel doesn't care a damn about the rest of the world and its criticisms. They are after all The Chosen People.

End this farce; why not just carpet bomb the Gazans? Death will be quick and swift. After taking away their livelihood, land and basic human rights, not to mention the dignity of these proud and resilient people, is there really anymore reason to continue living? The 'Chosen People' had taken matters this far with just a slap on the wrist, why not go a step further?

Syabas Kak, for speaking out so eloquently. I hope you are not part of those who unknowingly/uncaringly support the chosen people by eating at american fast food outlets and shopping at tesco, etc

Dear Anonymous 2.22pm,
Thank you for your comment. I know exactly how you feel. Nobody cares about their plight especially our rich Muslim countries.


Dear Anonymous 6.36,
Appreciate your contribution. Since you inquired we have not been to Marks and Spencers for instance, since 1984. Neither have we entered the portals of McDonalds, KFC, Starbucks, and all American Burger Joints and especially Tesco here or in Leicester. We don't buy any other products like toiletries and foodstuffs that support the Zionist/Apartheid state of Israel.

We always keep an eye on our consumption in an effort to make sure it accords with our principles.

And in our Will we have set aside a Donation for MAP (Medical Aid for Palestine) and Islamic Relief.

Salam Kak AsH,
You have been persistently bombarding us with facts on the suffering handed down by the Zionist and their friends. Hopefully more people will be aware, show their concern and fight for Palestinians plight.
Reading you comments.. I salute you and you spouse on your principical , resolution ...
May Allah bless both of you Sokmo sokmo

Wan Sharif,
Salam to you too and thank you for the encouraging comments.
Thinking and caring folks like you will make a difference to the unbearable sufferings of the Gazans.
And we should be proud of our Malaysians in the Flotilla. They really put their money and life where their mouths are.
One thing we can certaily contribute is to stop wasting food. It's painful to observe at the food stalls or in restaurants or at weddings; the amount of food left uneaten on our plates. When we were kids my mother would tick us off if we do that. She would say, "The rice will cry if you don't finish your food" or "on that plate is your father's toil and sweat".


Sunnysideup,
Thank you. Your question is so apt and nicely put.

i have nothing but great admiration and respect for those volunteers onboard the vessels bringing in supplies for the people in Gaza.

ph,
Thank you for expressing your kind thoughts of those volunteers.
May they achieve their objectives and return home safe and sound.

Hate it when after a week or two, this will die off and business will be as usual.
Shouldn't we have Gaza Day or Free Palestine Day each month....?

...and at this Fridays preKhutbah talk, the speaker let the cat out of the bag. He said the flotilla's main aim was not to ferry succor to the Gazans but, knowing how the Zionists would react, bring much needed attention to the plight of the Palestinians.

And they have to some extent achieved their mission. But whether this will just be another blip on the international radar, and soon forgotten as the next atrocity develops, or will bring the Israelis to their senses remain to be seen. More likely the former.

'Cos so long as there are Joe Bidens in the world willing to get their bottoms kicked and yet continue to bend over backwards to not offend their sensitive Jewish bosses, this tragedy will go on playing out till the bitter end.

Have a great weekend...

To Anonymous June 4. 8.07,
Thank you for your very, very perceptive comment - this will die off for such is the nature of news.
Your suggestion for a Gaza Day is absolutely brilliant. Hope someone out there with the necessary clout is listening.

Mr Bojangles,
Many thanks for your sharp analysis of this blot on the Zionists' landscape.
I'm a pessimist or at best a pessoptimist where the Palestinians are concerned. Unlike the people of East Timor they will never get justice, not for as long as the Zionists' fellow-brethren control the Senate, the Congress and the President of the USA.
Have a restful weekend too.

Make sure you read till last to know what is white phosphorus! and the effect!
( UNRWA SCHOOL IN BEIT LAHIA, GAZA , PALESTINE )