Remember, Remember the Cull of December

To cull is to kill surplus animals. It also means to kill the weakest unwanted members.
To Israel, Palestinians are unwanted for the sake of Greater Israel. They are weak because they do not have the sympathy and support of the World's Superpower. In the Israeli dictionary Palestinians are likened to animals-they are regarded as cockroaches-to be squashed.
A year ago, almost to the day, Israel carried out Operation Cast Lead and in the carnage, 1400 Palestinians were killed. Of these, 773 were civilians and among them were 412 children and teenagers under the age of 18 and 110 women. Between 27Dec to 17 Jan 2009 there were 13 Israeli dead of which 3 were civilians. Of the 10 soldiers killed, 4 died because of 'friendly fire'. Of course these figures will be disputed but when the Goliath state of Israel (with the backing of their Godfather USA) attacks puny Gaza any cretin can tell who pays the price.

REMEMBERING THE NOUGHTIES
As 2010 is just round the corner the media here are caught up with celebrating and categorising highlights of world events between 2000 to 2009 - the Noughties.

The website The First Post did a picture gallery of 21 photos to signify this period.
In their list are 1. Fireworks at Tower Bridge on Dec. 31 to celebrate the Millenium 2. The actor Ricky Gervais in the sitcom "The Office". 3. A New York firefighter on September 11 2001 4. Osama bin Laden who claimed responsibility for Sept 11 5. Bush, Blair and Rice at Crawford Texas in April 2002 6. Jade Goody leaves Big Brother in 2002 7. H5N1 Avian flu 8. The toppling of Saddam's statue on April 9, 2003 9. Britain's top model Kate Moss 2004 10. The Harry Porter movie 2004 11. The Asian Tsunami 2004 12. Burial of Pope John Paul II 2005 13. The London Bomb of 7.7.2005 14.Hurricane Katrina 15 Apple unveils the iPhone, 2007 16. Uganda Opposition leader Morgan Tsvangirai leaving Court 2007 17. Pro-democracy demonstration in Burma 2007 18. Usain Bolt who won the 200m at the Beijing Olympics in August 2008 19. Lehman Brothers employee leaving the Company HQ. This collapse triggered the financial shockwave of September 2008 20. Street art portrayal of Obama in New York, the first black (should actually be categorised as dual culture) President in November 2008 and 21. Michael Jackson's daughter during his memorial service of July 2009.

Note the marked absence of pictures of the bloodbath in Iraq, Afghanistan and Gaza. It is as if Item 17 for instance, has more credibility and significance than the deaths in Gaza. More ominous-in the invasion of Gaza-is the systematic and almost total destruction of Gaza's infrastructure. Today Gaza depends on 1,200 tunnels into Egypt to overcome the Israeli blockade and secure their supply of food and other necessities. Of course these are regarded as 'smuggling' tunnels. 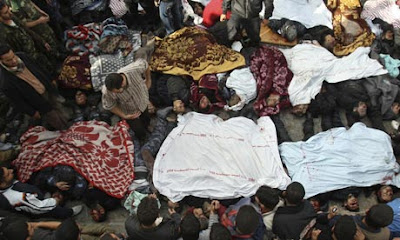 The bodies of Palestinians are laid out at Shifa Hospital in Gaza after Israeli missile strikes. Photo by Suhaib Salem/Reuters.

For the First Post's Picture Gallery of The Noughties , check http://www.the firstpost.co.uk

He ain't heavy, he's my brother. Really????
Boy, you're gonna carry that weight - The Beatles.

Shall look it up.