Today, the 11th of March 2008, Lord Goldsmith, the Attorney General who said that it was legal for Britain to attack Iraq in 2003, suggested a policy where all secondary school students had to make an oath of allegiance to Queen and Country every morning, just like they do in USA and Singapore. I shudder because I can just visualize what those kids will do to 'embellish' the occasion. Oh, I pity the headmaster and the teachers.

I recall my experiences with demonstrations of loyalty which stretched from the time I was in Pasir Panjang Primary School from 1951 to 1957. We used to celebrate Empire Day, indeed we did, believe it or not!.There would be a School Assembly and we would salute and march past the Union Jack. We were taught that the Union Jack was made up of the flags of St George of England, St Andrew of Scotland, St Patrick of Ireland and and St David of Wales AND we had better remember that! After the march past we were given a talk by a superior-looking English Colonial Officer. As we were just little brown piccaninnies (I'm being ironic here), the sight of an actual 'white man' left us quite gobsmacked, as they say nowadays. No wonder we looked very, very attentive, even scared.
Before 1953, we were taught to sing 'God Save the King' and when his daughter took over, it became 'God Save the Queen' and that anthem became absorbed into our blood and bones. Many years later in 1974 I went to a movie in London. At the end of it, they would play 'God Save The Queen'. Everybody else, mainly the indigenous people of England were desperately scampering out while I stood rooted to the spot. Old habits die hard. I had to be almost forcibly dragged away by my 'native' companion!
When I was attending Crescent Girls' School (1958-1961), I sang 'Majulah Singapura' and later when Singapore was embraced into Malaysia, I also sang 'Negara Ku'. When Singapore was unceremoniously ejected from Malaysia, we kept to the former. When I entered the teaching profession in 1967, I found myself supervising tetchy and testy teenagers during the flag raising and oath-taking ceremony and the singing of the National Anthem.
Unfortunately, one of my students who was not too pukka with the English language wrote in his school composition for me : 'every morning we sing our national anthem and swear at the flag' !! (Honest, Guide's Honour) Bless his cotton socks.

With all these demands on my loyalty, no wonder I sometimes go to bed thinking, "Who do I belong to?" or rather "where do I belong?". It has to be where I take off my shoes or as they say in this country, where I hang my coat. 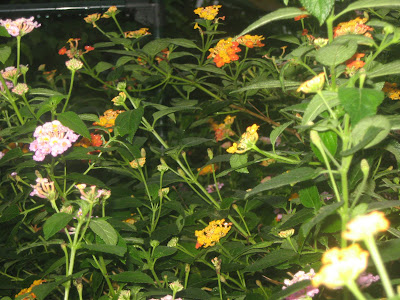 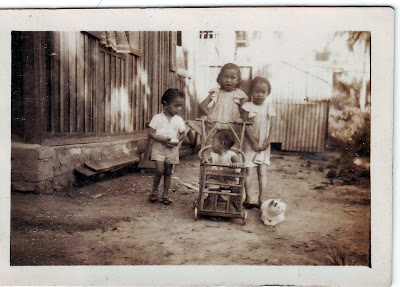 The four of us as wee bairns with our first cat, Puss. He waited for Abah to come home before he gasped his last breath.


Now, if I had a chance to design my own flag, it will look like this. The middle will be filled with all the brilliant colours of my favourite kampung flower, bunga tahi ayam which unfortunately translates as 'chicken shit flower'. Never mind, it is still special to me.
I shall illustrate the border with pictures of Puss, Puteh, Tina, Dajal, Belang, Kooky, Suzie, Rosemary, Fido or Oscar, Poppy, Bendy, Quincey, Mana, Poppy Mark 2, or Kuntum, Fido Mark 2 aka Adek, or Tiger, Socks, Hitam, Rusty, and Comot aka Coreng. These are all my cats from Singapore, Batu Pahat, Leicester and Kuala Lumpur; from 1946 to the present. Most have gone and many tears were shed when they departed. Here are the KL Mob. 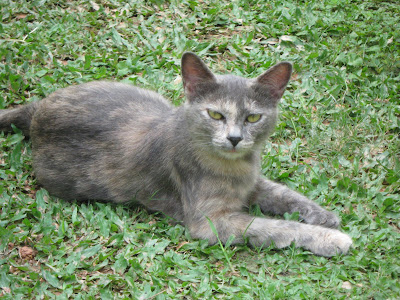 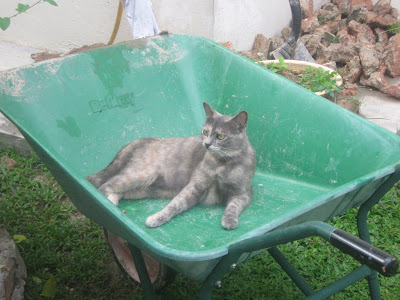 Can't resist this picture of a cat destined for the garden tip! 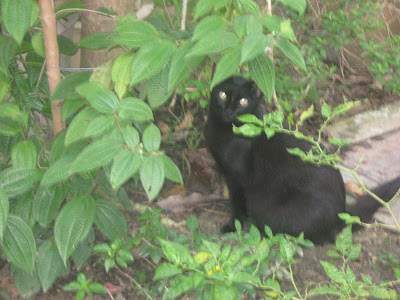 Is this Hitam or Rusty - no idea! 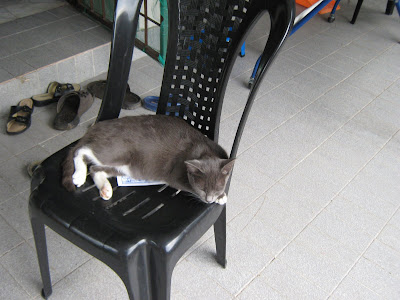 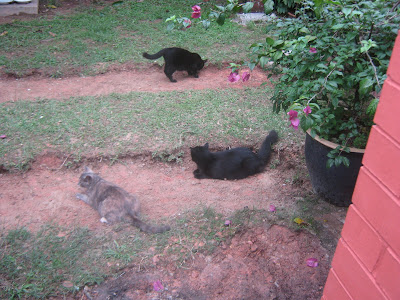 
I would also include Pedro, our one and only puppy, but we had him for such a short while because he disappeared after a big flood in the kampung house at Pasir Panjang. I will have to find room for our rabbits, geese, chicken and especially my very little chicken, the runt who was almost featherless, named Bogel. Whenever I got home from school, I would sit at the threshhold of the back door and called out 'Bogel, Bogel' and he would come running to peck my hand or peck my cheek. I think I was his only friend because he was so terribly bullied by his stronger siblings. Later when his health showed signs of weakening, my dad decided to do what he thought was best and my pet became a meal. (In those days, in the 1950s, you get a chicken meal only on the most rare occasion.)
From that day on, I could not bring myself to eat chicken meat. It was only after 10 years, when I was staying at Eusoff College (Singapore University), that I started eating chicken again because you eat what is on the menu or you go hungry.

As for my Anthem, I choose the Beatles' "In My Life".

All these places have their moments; Of lovers ( people) and friends that's gone before. Some are dead and some are living, In my life, I love them all.

Hi Mak Ngah,
Can't listen to your national anthem leh - 'video no longer available'.
And can't see your Bogel,the cat. How I wish there's other supermodel who blog, have a cat name Bogel & I can say the same thing to her :)

Zan,
I don't understand. My Anthem is playing loud and clear on my blog. Maybe you need a new machine ????
AND Bogel is the name of my chicken!!! Are you sure you're related to me? Also supermodels don't blog, they model.
Dream on.....

hahhh---I remember theEmpire Day, Poppy day and the Coronation. They always reward us natives with little red 'flower' (forgotton the type --or was it a four-leaf clover ??), little medallions with their queen's face ---and of course we have to put our day's pocket money into their collection tin for the Poppy Day .

The Pledge ! Hah---my teaching days when the kids have to sing the National Antherm and say the pledge. I remember it had to be done in English and Mandarin--until I could recite it in Mandarin so well that I could pass off easily as a Chinese if you don't look at my face.

and like your kid innocently wrote, we started 'swearing' at the flag --literally and not-so-innocently.

Oh---"In My Life" ---my ever ever ever favourite of all the Beatles songs !

Oh okay, my mistake....Found out that i can't access you tube from company's laptop, no problem at home.
and i still can see the Bogel chick..

I am not one of your students but how I wish you were! Please continue to blog and share your experiences with us. Teachers like you are getting harder to come by and these days they are rare gems.

Your stories about Ms Then (that crazy woman) reminded me of a similar experience with my math teacher, Puan Jamaa'tun. She would take the math period to teach us Islam and criticizes all other religions to an extend of chastising our parents for not finding the true God. I still remember the day she uttered ' I am better than Buddha'. My classmates and I cringed in embarrassment and continued or rather pretended not to hear any of her ramblings and tried to worked out the math questions ourselves. Then there is our Pendidikan Moral teacher, Cikgu Halimah whom told us that we should just balik Cina and India as we are not needed in Malaysia. That was in 1998.

We are more divided today. I remembered I used to have Malay and Indian classmates during primary school. By the time I entered secondary school, all my Malay friends went off to Sekolah Asrama penuh. By the time I graduated from school, nearly all my friends are Chinese and Indians.

As for those snotty and snobby Singaporean Chinese, rubbish to them.
Che'gu, it is not just Malays that get the shoddy treatment, we Malaysian Chinese receive the same too. They are the most irritating bunch of buggers really. Whenever they visit Malaysia, they will criticize Malaysia to no end.

Dear May,
I'm sorry for taking so long to publish your comment. Have been away in Penang for 5 days.
Firstly, thank you for your contribution. There are, to me, two types of bullies. Firstly, there are those who have a superiority complex and want to either tune you to their song or insult you into shame of yourself and your beliefs/culture. Secondly there are the pathetic ones with an inferiority complex who can only justify their existence and ignorance by hitting below the belt and abusing their position of power, like your teachers.
I have in my years defended both my Malay and non-Malay students from such bigoted bullying , coming from both racial and class differences - topics I hope to pursue later in my blog.
Indeed the racial divide is getting worse not only here but in the rest of the world like in Britain where I have resided for over 25 years. Compared to the west, Malaysia's racial relationships are still the best. Even in India, where they are all of the same 'colour', the treatment of people who are of darker hue than the other, and of the poor are quite abominable and cruel. I have seen in Bombay, a man throwing his unfinished 'bhaji' to a beggar on the railway platform. I was on a bus in post-apartheid South Africa about 5 years ago when I watched a white woman giving away to a black who looked obviously poor, her half-empty bottle of soft drink.
I'm afraid May, it's a nasty world out there and maybe someone like you of the younger generation can bridge the gap. We don't really have to love and hug our difficult neighbours. What is needed most important of all is respect. Even tolerance is insufficient because it indicates a passive reaction whilst giving one another respect requires more thinking and soul-searching.
All I can say to you is do not give up on our fellow humans. Sometimes, just a simple sincere smile can work wonders.