Baju Kurung (CsH) - The Ramblings of a Malay Malcontent - Part 3 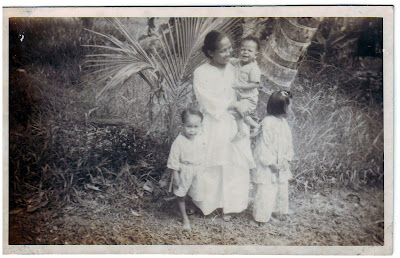 A happy mother and son (Mus), Maznah in her cute baju kurung looking at ?????? and me the tomboy at Kampung Chantek (off Dunearn Road) - sometime in 1948.


I'm not ashamed to admit I was a tomboy. I was the family's general factotum and was very happy to jump on my trusty steed, the Rudge bicycle, at any time to run errands for my mother. We lived at 5 m.s. Pasir Panjang Road and I especially enjoyed cycling to 4 m.s .to get her the kelapa parut (grated coconut) because there was only one shop there that had a mechanical coconut grater. Remember what your fingers looked like when you use the home grater? It looked like a colander!!! Cycling to 4 m.s. also meant I might get a chance to catch a glimpse of Ng Kian Ann hanging out at Boon Leat Terrace. But alas he was already spoken for. I was just 12 in 1956 - a regular tomboy in love with the Marlon Brando of Pasir Panjang Primary School. 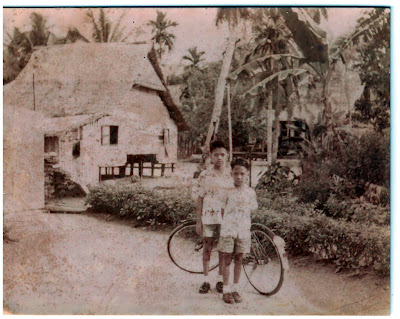 MY Rudge bicycle and those two pests Mus and Akim, 1956.


During the school holidays that bicycle was a constant source of bickerings between myself and especially Mus. But, most of the time I used my seniority (and size) to tell him to buzz off!

Being a tomboy, naturally the baju kurung ( enclosed dress) was not my cup of tea. Every Hari Raya Day, my mother would have to cajole, persuade and finally force me amidst my tears to put on the traditional baju and the gold necklace and bangles. I simply abhorred it!
As soon as the salam and minta maaf to mak and abah were done and after visiting our great-uncle tok Malik,and great-aunt nek Esah, (where we were overjoyed with the 50cents angpow ) it was off with the new and on with the old. I knew my long-suffering mother disapproved but abah just indulgently ignored my cussedness. In the baju kurung, I just couldn't walk, or rather, stride properly. The sarong was constantly knocking at my knees, impeding my freedom of movement AND you can't jump on to your bicycle in that outfit. (Why can't me mum empathise with me?). I looked clumsy, gawky and was terrified in case I bumped into any of my classmates, especially the boys. After all I do have my reputation to maintain!! I don't want them to see me dressed up girly-like!

Tomboys grow up into young ladies but the baju kurung was not my 'scene'. I only wore them for formal, serious occasions and visiting relatives especially fussy ole aunts.

I was at the University of Singapore from 1964-1967, studying Geography and Political Science. Some people prefer to use the word 'read' instead of 'study' - which I regard as pompous and snooty. It reminded me of a colleague at Yusof Ishak Secondary School who 'read' English at University but refused to teach Shakespeare's "As You Like It" because she did not study the play at University! But that's a digression.

Myself and about 5 or 6 other Singapore Malay undergrads were given a Special Malay Bursary of about $1,000 a year as a scheme to help and encourage Malays into higher education. We were thankful for that help although it was minimal compared to what Malays from Malaysia were given.

Each time the note pinned to the Notice Board at the entrance to the Union House informed us to get our Bursary from the Bursar's Office, we would find written on the notice nasty remarks like "why give money to stupid Malays?" or "why so special?" or other vulgar words in Malay, English and Hokkien - all very multi-racial. This was during a very difficult and critical part of Malaysia's and Singapore's relationship. On 9 July 1963, Singapore joined the Federation of Malaysia - acceptable to Singapore because of the economic, employment and security benefits that membership would bring. But that also brought along with it racial and political tensions and the Chinese in Singapore were particularly against the affirmative policies towards the Malays and especially Article 153. Their rallying cry was "Malaysian Malaysia" - a term/demand that the Malays were very suspicious of.
We, the Singapore Malay undergrads, sensed this undercurrent of hostility and resentment. All this because of the $1,000 Bursary. We got into the University on exactly the same credentials as the non- Malays, no favours in that direction. We were not the offsprings of well-heeled professionals or taukehs, mostly lower to upper working class families. Admittedly there were no unpleasant face-to-face encounters. But the bigoted racist remarks about Malays, Malay rights, the Sultans, etc. which were scribbled in the Library's history and politics textbooks left me gobsmacked and confused. There weren't enough Malays in the University to 'counter' this 'vandalism' of the text and the context - so we just sat tight and took the brunt.

On one of my trips home from the hostel (Eusoff College), I asked my father why? How do I live with Article 153? He told me to read the History books, to study the statistics of the unequal distribution of wealth and income in the country, the big gap, economic and educational between the rural Malays and the urban non-Malays; why the Malays challenged the Malayan Union of 1946, and what are the Malays doing fighting the Communist guerillas in the jungle? Of course all these issues were not the concerns of my A-Level History and Economics.

And when I glibly remarked - but the Malays are lazy and backward! All those scribbles in the Library's books had an effect. His jaw almost dropped and he calmly said, "It took the West, including Britain, 500 years to move from feudalism to the present modern age. The Malays had less than 100 years and the British did not have to cope with a large immigrant population of Indians and Chinese as well as a Colonial power that was only concerned with filling up the coffers of their Treasury." It was my turn to gulp. I have never been as proud of my father as that time when he put me down and put me in my place. He had no tertiary education, only the knowledge and wisdom of a man who thinks. A sound education does not necessarily make a thinking man/woman.

The campus itself was buzzing with all kinds of talks and lectures by prominent politicians from both sides of the Causeway. There was generally an air of apathy even among the miserably few Malays. In fact, I felt that the Peninsular Malays tend to look down or look askance at us Singapore Malays - like the country mice who were poor and pathetically unsophisticated. I felt so disenchanted with University and thought of applying for a NZ Scholarship to study Physiotherapy!

One evening, I can't remember when exactly, but before 9.8.1965 when Singapore was 'expelled' from Malaysia, I attended a lecture by Dr Mahathir Mohamed, of course he wasn't the PM then. Came one question from the floor by a Senior Lecturer in the Law Faculty, now a prominent Ambassador for Singapore. He queried the rights and privileges of the Malays as enshrined in the Constitution and sort of recommended an alternative as espoused in the 'Malaysian Malaysia' mantra.

Dr Mahathir looked at him and said. " You know what is the problem with you Chinese? You cannot accept the Malays running the Government because you are so used to seeing them as your drivers and gardeners." That was that. The Lecture Hall was hushed.

The next day, I put on my beigeish-yellow cotton Esbyline Baju Kurung, which I had 'borrowed' from my sister and walked to my lectures with my head held high. My Baju Kurung is my heritage, it was not to enclose me but to set me free, not as a proud Malay, but one at ease and comfortable with my Malay ways and purpose - Malay warts and all. Over 40 years on, the racial and racist problems are still simmering, but we are getting there. After all, it took the West 500 years. 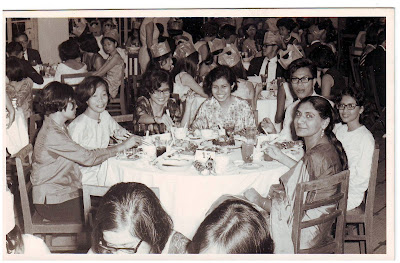 Me in my baju kurung (second from left) at the 1966 Christmas dinner at Eusoff College. That one table attests to the Malay population at that time and there were only 2 Singapore Malays present.

I still wear the Baju Kurung for special occasions. I still have my mother's Baju Kurung Teluk Belanga with the pocket on the left and the edge of the neckline hemmed with very fine and delicate tulang belut (herringbone stitch ? ). And I can still struggle on to a bicycle, but just a little wobbly. What do you expect?

Hannah, I hope you find this long essay useful.
Posted by anak si-hamid at Monday, February 02, 2009

Dear Mdm,
I'm just a passerby but won't be anymore in the future. You write so well in clear concise language. I love your story here of your university days. I'm sending a link of your posting to my niece who is studying in Washington. It may help her too in tackling some negative vibes.
R.S.Hani

Hello R.S. Hani,
Thank you for the kind words. I do hope your niece will find these recollections useful, just like my niece Hannah.
These are difficult times for our young ones and they need food and fodder to keep their heads up.

I am speechless ! What a posting ! I know Hannah will find a lot to learn from this.

Thanks Nor for the ride (not that wobbly one) down memory lane . OMG--is that me ? I've forgotton how i looked and glad to know i was cute then --and still am ! heheheh.

may i add further...

that hedge fence -- i remember having to trim them with a pair of shears ( sometimes blunt).

Sometimes I would do it with tears running down my cheeks and made a terrible job of it. But on a good day it would look professionally done.
Another job i hated to do was sweeping the leaves after finishing the job.
And of course not forgetting digging the drains surrounding our front-yard whenevr it became 'shallow' with earth.

ps--remember how Abah gave me and Akim a good beating with a rolled-up newspaper after I had a fight with Akim who chased me round the house with a nail-clipper and managed to clip my back. Think i still have the scar that looked like this =.

Hi Mus,
You would look cuter still if you could show off your scar - tiny though it is!

Ms hamid, I still wear baju kurung too as the kebaya no longer agrees with my waist - or the other way round. when are you coming back? It is so cold and Leicester must be colder now.

Dear Mak Ngah,
Thank you for sharing your experience on something that is not written in the history books in schools.
I find it useful next time if I'll encounter those bigots again
Hannah

I relished reading your anecdotal accounts of an era that is clearly slipping away from us all... I am an admin of Geylang Serai, kampungku in facebook and wud appreciate if you can 'loan' me some of your 'sepia toned vignettes' that I can share with my kampung folks of like minds... ma'asalaama... Zul Aziz

Sorry for the mess-up.