Semangat 44 and a Grumpy Old Woman

For the record, I am a member of that transitional generation that could sing God Save The King/Queen, Majulah Singapura and Negara Ku with gusto and pleasure and several dashes of pride.

In 1951 I was seven years old and at Pasir Panjang English School in Singapore.    Here we were taught God Save The King (King George VI) - which, in 1953, became God Save The Queen (Queen Elizabeth II).    In 1959, when I was 15, Singapore attained self-government and Majulah Singapura took the place of the British anthem.   Came September 1963, Singapore merged with Malaysia and I added Negara Ku to my repertoire.   Then it was back to Majulah Singapura on 9 August 1965 when Singapore was expelled and became an independent Republic.

But Negara Ku was never an unfamiliar, foreign anthem in our family or in many other Malay families in Singapore.  The family of Abdul Hamid bin Jala/Jaleh never saw themselves as being Malay as defined by shifting politics - sometime Malayan, sometime Singaporean, sometime Malaysian!   No.  We were Malays defined by much more than that - by a shared history, a shared tradition and  culture, and a shared religion.  We were simply Malays, from an island and a peninsula in the one Malay world.    BUT THAT WAS THEN!

It is hard to wean myself away from all those past anthems in my head and my psyche.  In 1974 (when I was 30), my two native English companions had to pull me out of the cinema because God Save The Queen was playing at the end of the movie and I had automatically stood up to attention.  Everybody else in the theatre were scrambling out!!  How do you delete a song which which has been embedded into your head from the tender age of 7/8 years old!

In 2009, when I finally became a Rakyat Malaysia, as my Abah had wanted me to do since 1968, Negara Ku was not alien to me at all - it is like what my dear Emak would describe as familiar as "air mandi".  But when I hear Majulah Singapura, I respond to it with a respectful nostalgia - as a Malay from Singapore.  " Tempat jatuh lagi di kenang.  Ini kan lagi tempat bermain".

That is a long preamble to my posting today - Malaysia's 15th General Election.  I did my duty for GE 14.  It is a duty that I regard with great seriousness.  But I had to weigh my responsibility as a rakyat with my need to look after the health of 78-year-old AsH and her octogenarian spouse.  Four months ago both of us had a bad dose of Covid, and the ramifications of that on our health and well-being and our work were horrendous.  I looked to the spouse, to a good friend on our street, Fadzil and to Zaini a comrade-of-like-mind to help me to a decision.  So, I shall carry on with this posting knowing that I will be risk-free,  InsyaAllah, to carry on with our "vocation".

This morning, on our way to breakfast I took a few photographic souvenirs of GE 15.  I should have been snapping the election banners before today when they were all glowing and blowing in all their splendour on those bright sunny days.   There was an obvious coincidence of a predominance of blues -  UMNO/Barisan and Perikatan Nasional banners in less well-off areas and in Malay areas.   I noted more reds in the more upmarket residences.   A caveat though - this is only what I notice in and around where I live.

What would my father (1910-1974) have thought of this and all other elections and the plight of his Tanah Air today? 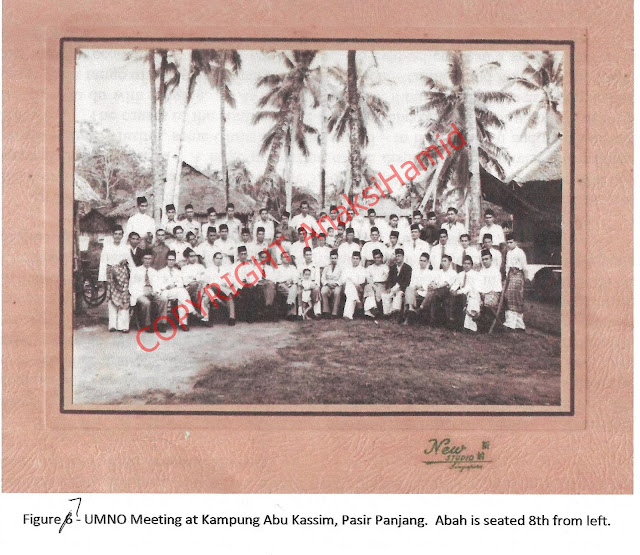 Abah and all his friends had such hopes for their Tanah Air .   I saw my father's tears when, on 31 August 1957,  we were all listening on the radio to Tunku Abdul Rahman calling out "Merdeka! Merdeka! Merdeka!"    It was the declaration of independence for Persekutuan Tanah Melayu.

"Why are you crying?"  I  asked my father.  "I am happy for my country but I also fear for her future."

Looking at his Tanah Air today, Abah would once again be in tears - but now holding down his head in his hands in despair.

I have observed the political shenanigans going on in this nation for the past 13 years.  I reckoned our "Malay-led backdoor government" did a remarkable job in pulling us out of the pandemic.  We may not have been the best in the world, but we do have something to be proud of in the leadership and all the personnel that worked tirelessly for the country's salvation.  For these personnel there were no rewards of titles, high dividends, generous bonus and profits for their hard work and sacrifice - only their sense of duty to their Tanah Air.

And yet, looking at the brouhaha and the innuendoes and the sleights-of-hand during this 2022 political campaigning, it is certain we have learned nothing at all after the pandemic.

Every five years, we put up our democracy for show.  We still believe in our rights and responsibilities as a rakyat of our Tanah Air.  We have to keep on believing, even though :

Abah, I have not left my country.  I fear our country has left me.