In Loving Memory of KT 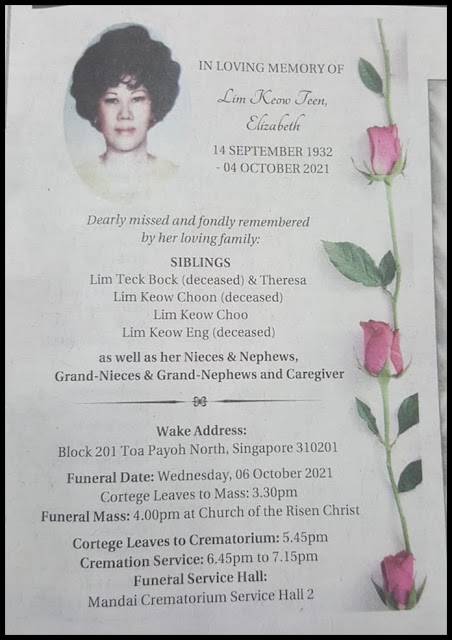 Dear KT.  It took your sad passsing for me to discover that you were 12 years older than me!  In all those two years when I was your colleague and lunch companion at Jurong Secondary School from 1975 to 1977 and during our lunch-revivals when I was teaching in Brunei from 1978 to 1984 and after I left Singapore for good as of 1985, you were the epitome of youthful liveliness and good cheer.

That memory of our times together as colleagues and good friends have lit up my life and times all these years since we were separated by our changing and changed directions in life.

I am so grateful that sometime during 2008 or 2009 those dear former students of ours from JSS (Year 1977) managed to put us together again.  By then life and circumstances have changed drastically for both of us and our girls as well.  But you retained that effervescent personality and gentle graciousness that have always been your hallmark for as long as I have known you.  What I would give to catch that warm and sweet smile again.

I remember two occasions when we were teaching at JSS when I saw a  Miss Lim Keow Teen that so endeared you to me and I felt that here was one good person and friend I must treasure.

It was sometime during my first week in JSS when I encountered my first dose of the incorrigible spirit of these kids from the backwaters of US or Ulu Singapore.  No middle class parents would deign to enrol their offspring in JSS - a den of working class kids from Jurong Industrial Estate.

I was on my way to the Teachers' Common Room when I saw a little commotion in one of the classrooms.  There was a bunch of 14 year-old boys pushing something into the class cupboard.  I put my head in and asked if there was a problem.  They were startled and as a result, several boys fell out of the cupboard, the littlest of them was the first one to descend.  I still remember his name, Suhaimi.  The puzzled (not angry) look on my face made one of them explain: "We are trying to find out how many (boys) can be stored in the cupboard."  What did I do? The normal thing was to call in the Discipline Teacher and bundle them into the Principal's Office.  I put on a  straight face and told them sternly, "Just be careful".

As soon as I got into the TCR I broke out in laughter at the antics of these scalawags .  They've got spirit I said.  But some of the teachers frowned and said they should be punished.  Only one teacher shared my glee. She was Miss Lim Keow Teen who became from then on my very special friend.

I found it strange that the ones who disapproved were younger than KT and I!

KT was a brilliant English Language and English Literature teacher.  She could extract the best out of those kids even though they think she's rather old-fashioned and quaint because of her hair style and her dressing.

She was later relegated  to teaching English as a Second Language in the Chinese stream of JSS.  As she was not a graduate she had to give way to someone who was.  KT and I often recall this graduate's excuse for not being too happy to teach one of Shakespeare's plays.  I can't remember which.  It was because she did not study that particular play when she was in University!

So KT went to her  ESL lesson for Secondary Two, Chinese stream. When she greeted them with the usual "Good Morning Class", they responded with grumpy mutterings - almost hostile.  Then one of them, a girl,  stood up and haughtily asked KT, "You are Chinese, why do you teach English?"  For a moment, KT was stunned, She simply told them.  " I am here because I was given this duty by your Principal.  Whether you like it or not, English is an important language for you to learn."

A few days later as KT was walking past these Chinese stream classes the students had prepared another greeting for her.  They snapped shut very loudly one by one, the series of louvred windows as KT walked past each classroom.  She was assailed by the sounds of snap, snap, snap, snap  from the louvres of each window as she walked along the corridor.  There was no one to be seen - just that serial clattering of snaps.  KT kept calm and when she got into the Teachers Common Room, she broke down in helpless tears.  How cruel, these snaps of bigotry and terrorising from such young souls!  All said and done, the Principal tried to assuage KT's anger and explained to her why these Chinese stream students did what they did, blah, blah, blah and all they had to do was to make a curt apology to the 'sen, sen'.

KT and I knew if the situation had been reversed and the English stream students did that to the Mandarin Language teacher, they would face the full wrath of punishment and discipline from the Nanyangian top hierarchy of Jurong Secondary School.

KT, I salute your bravery and your professionalism. I remembered you saying, "They are just kids, Maz.  Some adults  put them up to it."

Your graciousness is so inspiring.

I shall never forget you dear friend.  Have a peaceful journey and may flights of angels wing you on your way.

This post brings back vivid memories of JSS days. I can almost hear the noise and din at the school canteen during recess time...see blurry images of my classmates then in their grey and white uniform...Ms KT Lim standing before the class like some movie character with her own style and look... I remember other teachers too - likeable and unlikeable ones who came our way in their heyday. A long lapse of time have passed and brought about much changes.

Ms KT Lim was one of the likeable teachers and fondly remembered by us. May she rest in peace.

My schooldays (Primary and Secondary) were halcyon days. I adored my Primary School (Pasir Panjang English School) teachers except for one. I liked all of my Secondary School (Crescent Girls School)teachers especially my Headmistress Miss Norris. I liked only 50% of my A Level (Raffles Girls School) teachers and Miss Norris who became the Principal of RGS when I was there.

Teachers as colleagues - now that's a different kettle of fish! I can count less than 10 of them as friends and KT was one of the ten.

Though time have passed, schoolmates come and go but I had the pleasure and privilege of seeing my Primary 4/5 teacher Mr Kempson Wong once again (see previous postings) about 2 years ago.

I second your wish for dear KT. May she rest in peace.