After a long illness, which she bore with  fortitude,  Aisha passed away early this morning . She left behind a 22 year old son Hafiz  and a bereft husband Osman.  Her daughter died at 16, about 7 years ago  from cervical cancer which the authorities failed to diagnose.

Many a time 'Man would sit near our gate, (while waiting for Iain to drive him home) and talk about how he misses her.   Jangan makan sepinggan.  Nanti tak tahan rindu" .  'Man's mother always cautioned him about this habit of theirs, but they did not take it seriously.

He has to stay and work in KL while Aisha is lying ill in their kampung house at Kampung Air Kuning, near Kampar.  He would go home almost every weekend - a journey of nearly five hours each way - to be with her and look after her while he can.

Initially, when she was taken ill nearly 3 years ago,  'Man would do her job as well as his so that they could keep her wages going.  He would start work at 4.30 am cleaning the streets which covered both his patch and hers.  He managed to upkeep that exhausting schedule up to a year ago, when the management explained to 'Man that they could not maintain the "arrangement" and Aishah would have to "give up her job".

'Man himself is not 100 per cent fit.  He had a hernia operation about 8 months ago.  He could and maybe should be classified as an OKU because he limps very badly because of his gammy right leg.  But he persists - limping while sweeping Setiawangsa's streets and pushing his trolley.

This is a posting in loving memory of a tiny lady with a big heart - of a Malay kampung girl from a poor family - who started her working life at the age of 15 as a coolie on the Chinese vegetable farms in Cameron Highlands.  She would talk to her husband about how poor they were; when Aisha would share a plate of rice and fish and vegetables with her 3 siblings.  And by the way,  Aishah was born in 1957 - the year when Persekutuan Tanah Melayu became Merdeka!!

So don't tell me the Malays are indolent, lazy and survive only by depending on handouts from the Government!!

There's more to relate about the hard life of Osman and Aisha - about their plucky grit to get on with their life without depending on others. But my heart is too full of grief for her passing and the loving husband she left behind.

For both Iain and I, Aisha and Osman are the most dignified couple we have ever met ever since we moved to Setiawangsa in 2007.  We have enormous respect and love for them and they symbolize for me the faces of the honourable Malay gentleman and Malay lady.  A very rare breed in these days and time.

This is how I shall remember Aisha. 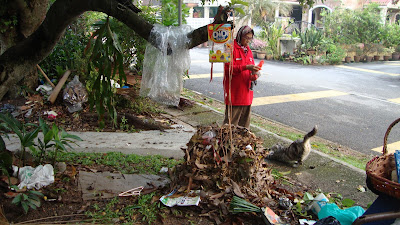 What the kampung girl left behind in and around our garden - we shall always look after them in her memory.


Finally, from the cats she loved and who loved her so: 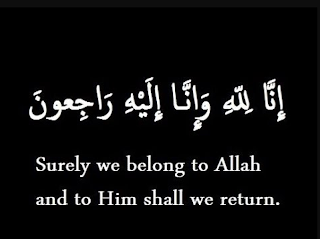 "Terima kasih 'bang, terima kasih kak".   We hear that so often from Aisha  and 'Man.


From us and the cats - the strays and the house cats : Terima Kasih Aisha for being a dear friend.

A beautiful touching tribute to a poor, but rich in HIS eyes street sweepers couple.

May Allah Bless you and your hubby always.
Aamiin

Though I have never really met Osman and Aisha, I have heard so much about them from you and know how Iain and you must feel. God bless her kind soul.

You have captured the niceness in them and between them as a couple in your pictures. Also, how relaxed the cats seem to be around them!

Hope both Uncle Iain and you are keeping well. Will write again soon...

Innalillahiwainnailaihirajiun. I'm so sorry dear Puan Ash for the loss of dear Puan Aisha, i always look forward to reading about her and En. Osman. May Allah place her soul amongst those whom He is pleased with, Amin yrba.

Sad story...but so many wonderful lessons we can pick from this couple.
#Steadfast #Righteousness