USA, Great Britain, Singapore and Malaysia all claim to be countries run on the principles of democracy.  To quote that very over-simplistic saying of Abraham Lincoln, democracy is "Government of the people, by the people, for the people".

A democracy is not ruled by a king or queen , a hereditary aristocracy,  a few selected persons, religious elites or any other unelected  power group.

USA is a democracy where the President can only get elected to power when he has powerful financial backers to see him through to the White House.  But he who pays the piper plays the tune.

Great Britain on the other hand is regarded as the Mother of Parliaments - whose system of parliamentary democracy is inherited by all or most members of her previous empire - of which Malaysia and Singapore are just two.  But the ruling class - the politicians and the ministers  - are saturated by privately educated, well-heeled Oxbridge graduates.  Not only that :

Democracy does not stop the domination of government, business, policing and the legal system, and education in the hands of a particular elite.

Quite interesting is this, the Labour Party (now in the Opposition) started as a party representing the working class and supported by the Trade Unions.  But ever since Tony Blair took over in 1997 and created New Labour  -  "red" Labour became more and more like  "blue"  Conservative - a party of big business and the wealthy.

And just recently it came to light that Labour, which is haemorrhaging from lack of funds has suffered another financial blow.  Because of Labour's anti-Israel stance over Gaza and Palestine her Jewish supporters and financial donors are leaving in droves. Here's a piper who will be losing his tune-maker.

In the case of Singapore there are all the trappings of a democracy but it's a form of democracy made-in-Singapore-for-Singapore only.  To replace the old guard - the leaders who were at the birth of the Republic of Singapore wef 1963 - Singapore designed a very Singaporean version of  anointing new, younger leaders.  This second echelon leadership was appointed and co-opted  from the elites in the professions, the Civil Service and the business sectors.  They joined the PAP only when they were nominated for a Parliamentary seat.

All that preamble was for the purpose of  expanding on this article I read in Utusan Malaysia a few days ago.  There was this young man ...... 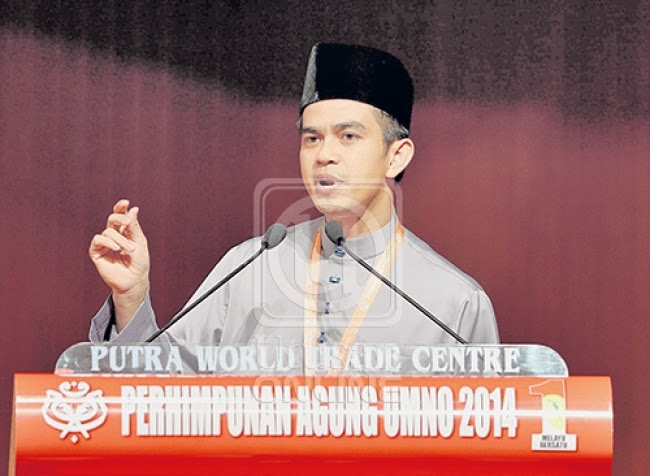 ......  Dr Mohammad Nawar Ariffin, an UMNO delegate from Kedah who urged that Umno needs an injection of quality to revitalise the party's status and strength.  These words emanate from the son of unschooled and poor padi farmers - who was given the chance by the government (led by UMNO) to progress from poverty to becoming a paediatrician.  He expressed his gratitude for the endeavours of UMNO to help its poor members (like his parents' family) to better themselves.

There are three key words, integriti, teliti and ikhlas - very crucial requirements for future UMNO leaders and followers who are truly budiman.

UMNO must listen  to such young voices (and many others like him) and give them space and opportunity to contribute to the well-being of  the nation and the Malays.

UMNO must choose its future leaders from the likes of  Dr Mohammad Nawar Ariffin - young Malays with  dedication and ability - and not merely rely on hereditary appointments  and old-boy UMNO  network.

In the past few months, news coming from Malaysia has got me sick up to the eyeballs.  Evangelist Brazilian football,  the pathetic circus over "I Want to Touch a Dog",  and revelations about stains on carpets and of body fluids during the Sodomy Trial are enough to make you weep.   And as for the recent brouhaha over the bangang and the stupid - well, they will always be with the Malays, where ever and who ever they are.

Thank goodness, I have discovered a piece of hopeful news in Dr Mohammad Nawar Ariffin - not simply because he's an UMNO man.  It's because this old lady can see in him a glimmer of my father's 'fire in the belly' when he organised an UMNO meeting in Kampung Abu Kassim in Singapore in 1952


I hope Dr Mohammad Nawar will carry on the torch of the early founders and leaders of UMNO and that the dinosaurs and fat cats and opportunists and cronies in today's UMNO will realise that the survival of the party and the Malays depends on young blood like the delegate from Kedah.

was his senior in UM, Mohamed Nawar is a skilled person, a good student,well-liked by his peers, has a good personality and is a good Muslim. I would be totally disappointed if UMNO ignored him.. unfortunately he does not have any cousin, inlaws, father or mother who were from UMNO supreme council...

I share your misgivings about Dr Mohamad Nawar's 'progress' in UMNO and especially in the UMNO Supreme Council.

The Malays have all the trappings of modernisation but their attitude towards power/influence and the monopoly of power is still very feudalistic and short-sighted.

It's such a joke, when non-Malays are up in arms about the agenda of "Ketuanan Melayu". They really have no worries because that attitude of patronage and power - of the Ketuanan of SOME Melayu - is also applied to the Malays. This is the nub of the durian and mentimun mentality.

I fear that those in UMNO who are threatened by Dr Mohamad Nawar's stance and ability may do the usual Malay thing - isolate him and clip whatever wings he has got.

It was so in my father's day, during my days and even up to now!!

UMNO ignores Dr Mohamamad Nawar (and others like him) at their peril. But this will be perilous too for the
future of Malays.

I salute this delegate from Kedah and may his talents and commitment find their day in taking the Malays out of this present black hole.

Have you heard of this Dr Afif Bahardin, from Seberang Jaya?

Tokong Lim appointed him as EXCO for Agriculture, Health & Rural in the Penang government at the age of 28 last year.

I'm not in the slightest bit surprised. The PAP oops! I mean the DAP are always quick on the draw. One Tokong emulates the other.

Just look at the Malays that the PAP in Singapore adopt!!

As for UMNO - they are what the Singaporeans would describe as 'boh chap', meaning can't be bothered. They live on the principle (?) of "itu jam hujan, itu jam cari payung".

The Malays have too many Lunchai and Pak Pandir.

But UMNO since the 1980s is all about patronage, money, contract deals, power, and sucking up to the leaders. The good old boy network doesn't like young people with ideas that can potentially disrupt their dynasty and the succession plan for their progeny.

Dr Nawar will be ignored or most likely become victim to the 'cantas-mencantas' culture endemic within the party. Ironic that young Malays these days see alternatives in other organizations, even in the DAP and yes, even the Parti Sosialis.

Too true, too true.

All the more, talented and committed young Malays must shake the bad apples off the UMNO tree.

This being Malaysia, with a toxic racial mixture and hence racial politics, Malays need to keep together.