Keeping up with Comments

I've been having problems with my comments page just like I had a few months ago.  Here are a couple of them - which I could not deal with earlier.

Thank you Anon at 10.53am.  Racial and religious differences will always matter for all of us, not only in Malaysia.  If we look at the example of Northern Ireland  ( a part of the United Kingdom), where there is hardly any difference in colour and culture in the Northern Irish, the religious animosity between the two dominant Christian factions - the Catholics and the Protestants - remains as intransigent as ever, despite the Peace Treaty and the political transformation that followed.

As for racial and religious differences, if we look at what happened in many other countries (South Africa, Sri Lanka and Burma for example) the inherently and historically Malay-Muslim Peninsula has a lot to be proud of.  Despite being flooded with immigrants whose religion and race and culture are as far apart as chalk and cheese, Semenanjung Tanah Melayu has done a commendable job (albeit with a couple of warts) in sustaining  all who live on board, in sharing the country's largesse and even giving room for one immigrant group to maintain and develop their economic prowess and control.  Of course , the less privileged and the poorer denizens have to be given a leg-up, despite the complaints and whingeing of the well-heeled who believe that they got to be where they were and are,  primarily on merit.

The table below illustrates the reduction of the gap between rich and poor which, since Colonial times, has coincided with a racial overlay and an urban/rural divide.

Here's a closeup of the above Table:  Mean Monthly Gross Household Income by Ethnicity, Strata and State, Malaysia, 1970-2012.

In short this Government has done quite well, for a Third World Country - and a Government run by mainly  Malay-Muslims to boot!!

As for your second sentence, I detect a bit of snide and insinuation about referring to West Malaysia as  "The Malay Peninsula".  Whether the Malay Peninsula is now West Malaysia or Peninsular Malaysia or Semenanjung Malaysia - in the language of the Malays from the Malay Archipelago-  before the encroachment of the Portuguese, the Dutch and the British and the unnatural increase of the Semenanjung's population - the Peninsula  consisted of several  Malay-Muslim states:
1. The Kedah Sultanate which included Penang and Seberang Prai  (1136 to the present)
2. The Malacca Sultanate  (1462-1511)
3. The Johor Sultanate which included Singapore  (1528 to the present) ......

...... and the Sultanates of Pahang, Kelantan, Perlis, Perak, Selangor, Negri Sembilan and Trengganu.

As for Borneo, up to the arrival of the Europeans, the two major powers were the Brunei and Sulu Sultanates.  But that's another story of  Judaeo-Christian malfeasance in Southeast Asia.  They did the same when they carved up the African continent among themselves.  The violent mess that plagues the Middle East had its origin in the (secret) 1916 Sykes-Picot Agreement between United Kingdom, France and pre-Revolution Russia to divide the Arab provinces of the defeated Ottoman Empire.

The name of  a  nation can be changed, it can even be anglicized, but the core makeup of its entity remains intact despite attempts by certain parties to rescript its history. 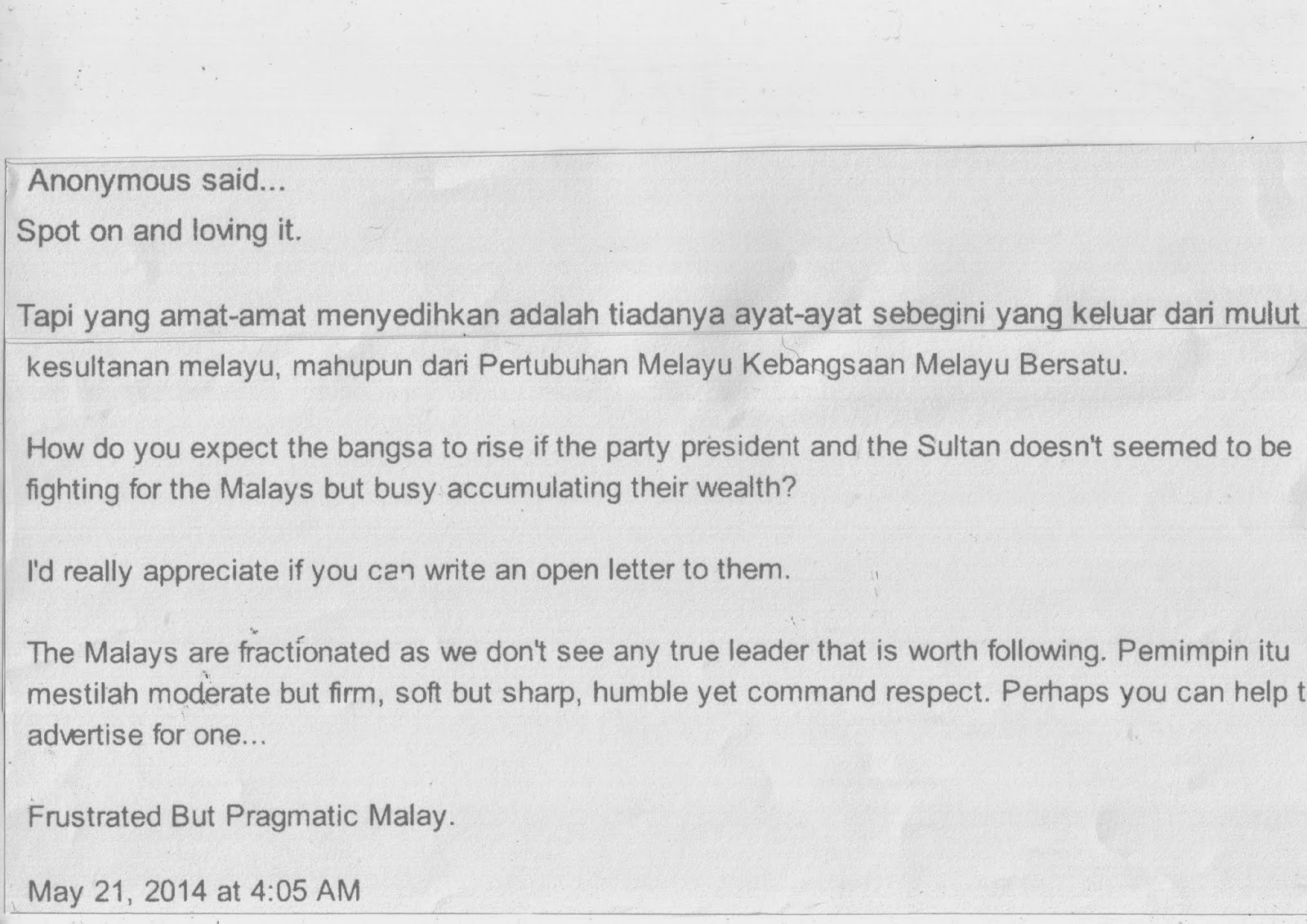 I don't think the Malay Sultans have the same privileges as royalty elsewhere.  The Crown Prince of the United Kingdom can spout statements about how Muslims are making life difficult for Christians in the Middle East and he can blithely compare Putin to Hitler AND he can get away with it.

Why name only Pertubuhan Melayu Kebangsaan Melayu Bersatu  (I assume you mean UMNO)?  What about PKR and PAS?

As for your suggestion that AsH should write an open letter to the "party president and the Sultan",  it reminded me of  another occasion when my fellow-Malays asked me to be their  'representative'.

In Singapore, in the late 1960s,  the celebration for Hari Raya Puasa depended on the sighting of the moon.  There were times when this did not coincide with the official date for Hari Raya.  When that happened, teachers and students of Sekolah Menengah Yusof Ishak were only allowed time off for prayers and then they had to report for school as usual.  That was when the Malay teachers, mostly men, both senior and junior pushed me forward to ask the principal, Mr Charles Lazaroo to give the Malay medium staff and students time off for the rest of the day after prayers.  I was just in my early 20s and I found no difficulty in chiding them and suggested ,  "Why don't all of us talk to Mr Lazaroo?"  That stopped all the proposals and pleas to place me in the line of fire.


This, I fear is the most destructive weakness of the orang Melayu - they are too self-serving and hence become too divided to take a stand.  They prefer to shine in the light of the opposition groupings by sucking up to them and to contribute to slagging off their fellow Malays  than to take on the taunts and  fire from their own  kin-groups and from their nemesis.

Furthermore, unlike me, your generation has a longer time left on this earth to make the necessary changes and sacrifice to guide the "frustrated and pragmatic Malays"out there - whether at home or abroad.   AsH is getting too old and weary from fighting too many battles for her students - being a minder for the Malay Stream against the English Stream in YISS  and for the English Stream vis-a-vis the Chinese Stream in Jurong Secondary School.

In my seventh decade, I  do not have the energy to pitch any more battles.  All I do is react- to hypocrisy and double standards - to convey a tit-for-tat and  turn myself into ....

Let me quote one of  our sharpest and kindest Malay poets and gentlemen, Usman Awang.  Where are the likes of him today??

Thank you very much cannonkapit for the bouquet.

It's very touching, your belief in what I write.  Cikgu has never left her 'tanah air'  (which includes Singapore and  Malaysia), wherever she settles.  Right now, since 2007, the spouse and I have the best of our two worlds that we hold close to our hearts - Malaysia and  England.

Even though our LFC did not make it big, but as a fan you've done quite well.  I can't agree more with what you've said.  The election results have proven what we all knew all along.  She was used for a patsy by her two Sifus -   the father and the son ... and Diana the Roman goddess of the hunt, the moon and birthing!