It is the weakness of the Malays as a community that, from the economic standpoint, they fall into two well-defined groups.  At one end are the Sultans and the hereditary Malay aristocracy, the latter filling many posts in the administration.  At the other end are the peasants, the dwellers in the kampongs or villages.  The latter produce nearly all the rice that is grown in Malaya, although this represents only one-third of the country's needs.  Along the coasts they are often fishermen, living in small fishing villages under the coconut palms that fringe Malaya's coastline.   These Malay peasants and fishermen are most likeable people, hospitable, cheerful, kind,courteous, but they are also backward and unambitious.  It is part of their charm, of course, that they are unambitious and easy-going, that they do not worry too much about the morrow and trust the morrow to look after itself.  But it causes real complications in the political sphere and as many of the educated Malays realize, it may in time lead to their playing a permanently subordinate role in the country which has been theirs for centuries.

......Few Malays are in commerce.  There is, in effect, no Malay middle-class.  The role of the middle class in Malaya, as in several of the other countries of South-East Asia, is played by the Chinese.

Here's my patchwork of images from my collection of old books to complement or decry some of the above points.


However in this 1956 Malay School Textbook this was what the Malays taught their children - but only in the Malay schools, not the English schools.


According to Morrison, the Malay peasants and fishermen are " most likeable people, hospitable, cheerful, kind, courteous" - but these charming facets do not help to pay the bills.  All these qualities are such a shame ( I'm being ironic here) because the Malays are still  "backward and unambitious".


I took the above photograph on our way from Georgetown to Tanjong Tokong three years ago. 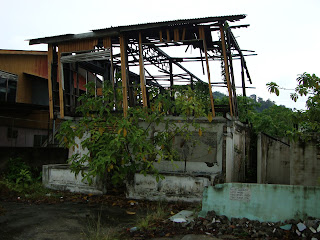 This is the background to that wall painting.  Is this the price of development?


But in this month of  Ramadan - while we fulfill the tenets of our faith which came from the Arabian Peninsula let us not forget our dreams and hopes as the people of the Malay Peninsula.  This is how we can strive .... 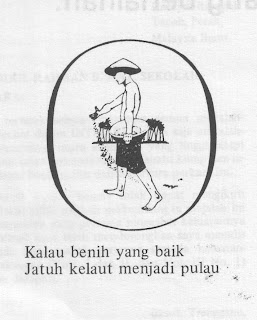 As a former teacher, I have met many, many good seeds.  But seeds also need the clean light of the sun, the soft, warm wet earth,  the loving hands to train the branches and the tendrils  and to learn from the good examples set by the adult plants.

Have a peaceful and fulfilling Ramadan.  But please remember that generosity, kindness, courtesy, consideration and thankfulness for Allah's blessings  are  not only for Ramadan.

Ramadan Mubarak to you too.

Thank you Seri and Selamat Berpuasa to you too.

Selamat berpuasa Ramadan to you. Thank you for all the postings I've read and enjoyed. Somehow your writings make me want to cry and bring forth the memory of my late parents and grandparents...

May Allah bless you and SAsH with good health and all good tidings.

What a touching comment - thank you. I'm so glad my words can bring back sweet memories of your late parents and grandparents.

Both AsH and Spouse/Suami wish you and yours all the best of Allah's blessings.

Whoever you are, assalamualaikum. Such a simple, meaningful comment warms me to the core.

Bless you and yours.

Have been a silent reader of your blog. Nice piece. May Allah Swt blessed you and you love one. Aamiin.

Thank you for the comment and glad that you liked the posting.

They do say a picture is worth a thousand words.

Peace and Allah's blessings be on you and your loved ones.

I enjoyed reading your postings.
English yang comel dan menawan.
Ni product of sekolah english zaman British kot. Sedih memikirkan senario politik orang melayu islam masa kini.A big chunk of the country's economy has already been given away on a silver platter to rakan bukan islam.Now dah partly give away the kuasa mentadbir negara to the other rakan rakan in the Ubah style ,Malaysian Malaysia spirit etc etc. So many cerdik pandai but...

Anyways, looking forward for your new posts.
Maaf for my lyrica induce opinion due to the sakit L5/S1 pain which is driving me nuts.

I do agree with your view about what's happening to this country and we Malays have only got ourselves to blame - we're too selfish and despite our religiosity, the foremost concern is with the self, 'numero uno'.

Yes, I was a product of the Colonial English School System, but I have never forgotten where I come from - of being an 'anak Melayu'.

Assalamualaikum Uncle, and wish u a Blessed Ramadhan.

Keep writing, Uncle, your writing has the essence of 'ilmu.

Attitude and respect to you with much thanks for the knowledge sharing.

(Note : I called you Uncle as I suspect you are much older than me, a sign of respect.)

Thank you firstly, for the comment and secondly for making me laugh. I showed your comments to the spouse and he smiled and says Uncle Iain 'kirim salam' to you.

Indeed we are much older than you but almost everyone who turns up here are much younger than us. And so a response from someone like you makes it all worthwhile. I guess I cannot get over my teacher-syndrome.

InsyaAllah, health permitting, I shall keep on writing. Once again thank you and Selamat Berpuasa.

i cannot help but worry. from a point, all that was done was systematically ousting the locals. then we have an influx of foreigners particularly from the most populous place on earth.

the similarity is all too eerie -> https://www.youtube.com/watch?feature=player_embedded&v=n3bxj1uvDXU

Am too a retired teacher.

The irony about the uses and abuses of immigration is that we now have Britain, Australia and most western European countries yelling blue murder about foreigners 'invading' their home.

Most revealing is Singapore where they are fighting tooth and nail about importing Chinese and Indians into their little island.

Perhaps they could learn a thing or two about how Malaya and Malays coped? Or is their attitude just another Nimby ( not in my backward?) syndrome?

Nice to meet another Teech. Thank you for your comment and the kind wishes and I wish the same for you too.

I do hope one day a Malay publisher will compile all your tots into a book for our fellow Malays to read.

Salam and thank you Enon for the bouquet.

Have a peaceful Ramadan.