We're familiar with the 24th letter of the English alphabet in words like x-rated, x-ray, 'x' as the unknown factor in mathematics or Mr. X as someone whose identity is not revealed to the public.

'X' is such an elastic letter and can be adapted to describe a variety of aspects, ranging from the sacred to the irreverent to the undisclosed.

When used for words like Xtian, Xtianity and Xmas, the letter 'x' comes from the Greek letter chi, the first letter in Xpiotoc  which means Christ.  'Christ' as in Jesus Christ means Messiah.

More crucially, for many today this extraordinary letter is very popular with the media in their search-for-talent programmes.

For me, at the moment, the letter 'X' is appropriate to recount my 1978 one-month stint at ACJC (Anglo-Chinese Junior College).  It was indeed an odd trip (quite acidic most of the time) into the sacred and almost secretive world of the affluent and privileged.  Together with the new non-ACSian (pronounced Xsian) Pre-U I students, I found myself embedded in a kind of nursery or crib for the elite, rubbing shoulders with the scions of the Christian and mainly Chinese Gentry of Singapore.  These students were seconded to this Made-in-Singapore Eton because there were not enough places for them in the Government JCs.  Like me, these newcomers represented the "hoi polloi" in the eyes of both students and staff of the blue-blooded ACSians - and were regarded with patrician aloofness as if they were barbarians knocking at the Squire's portals.

The ACSians had good reasons to be sniffy.  Founded in 1886 as an extension of the Methodist Church by Bishop William Fitzjames Oldham, their school grew into one of Singapore's most prestigious English medium schools.  It produced very successful men in both business and the professions.  It had a very powerful and committed Alumni who were prepared to dig deep into their pockets for the betterment of the Alma Mater.  Former students were also encouraged and assured of getting appointments in the school -except, that is, for the 'vernacular' Malay and Mandarin teachers.  Both staff and students had a strong sense of exclusivity and loyalty to the school.

ACS as a Junior College was just one year old when I was there.  Because of my proletarian background, I was quite overawed by the ambience and facilities of the College.  It was the first JC to have a sports complex and a 400m bitumen track on the campus itself.  The Shaw Sports Complex left all the other JCs standing.  They had state-of-the-art lecture theatres, a state-of-the-art air-conditioned library and a huge state-of-the-art Tan Chin Tuan Auditorium.  For the first time in my life I got to fondle a large grand piano donated by a former ACSian!  My Ford Cortina Station Wagon looked out of place compared to some of the students' cars!

Like poor country mice, the new non-ACSian students and I were quite prepared for the classy habitat of the well-heeled town mice.  But we did not anticipate the cultural shock on our first day.  On that first day, we were assembled before the Singapore Flag to read the Pledge, a daily, secular requirement to affirm loyalty to the Republic.  That over, we were all (except for the true-blue genuine ACSians) ready to march to our respective classrooms when we were stopped in our tracks.  We heard a Senior student reading The Lord's Prayer accompanied by a chorus from the ACSians.  I must admit I was stunned, and I saw it on the faces of the other 'alien' students there.  Like them, I was not informed  by the MOE (Ministry of Education)about this additional religious requirement in a secular state like Singapore.

Today I can still recite the Girl Guides' oath off the top of my head.  The National Pledge before the Singapore Flag, both in English and Malay, is still ringing in the recesses of my 68 year old brain.  And after one month in ACJC  The Lord's Prayer kept echoing in my head for months after I had departed for foreign shores.

And I was there for just one month.  I shudder for the non-Christian students who would remain there for the next two years!

I have often wondered.  What if I had no choice, if there was no alternative of another job in Brunei?

But first let me relate a true story to complement the above.

Once upon a time (in 1982 actually) in the city of Hull, there was a 5 year old spunky little boy called Shah.  Here he is - with his old man Mus - posing in his school uniform trying to look like Mr. Atlas. 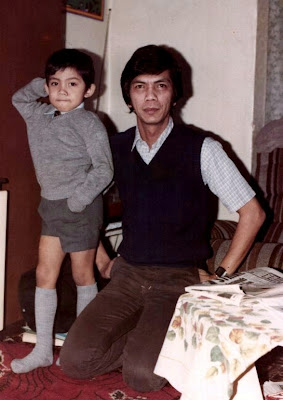 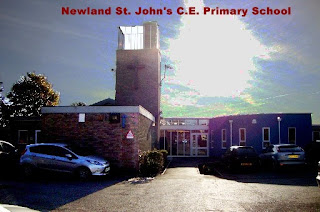 On his first day at school during the School Assembly, when they were reciting The Lord's Prayer he cried out loudly for all to hear.

Shah's parents were called up for a talk with the headmistress.  She said that Shah still had to attend Assembly but he did not have to recite the Lord's Prayer.  She also said there were other Muslim children in the school but this was the first time she had encountered such a protest.

You see, this was not just another little Muslim boy.  He was Cucu-si-Hamid,  the grandchild of Hamid!﻿

How on earth do you expect a child or a Pre-U I student to mentally shut out a daily religious mantra?  Shah's parents taught him to read the Fatihah instead.

For that month of January, during the daily morning Assembly at ACJC,  I psyched myself to switch off the incantation but it was hard - very, very hard.

I now wonder about how Adam, that 35 year old lad's son will turn out to be - maybe a bit more spunky than his old man?