Tuberculosis in Singapore in the 1950s was a serious health problem, like Aids today.   "The Report on the Pilot Survey conducted under the Colombo Plan in 1959 ....... set the incidence at 3 percent of the population".  ( State of Singapore Annual Report 1959 ).  Earlier Annual Reports from 1954-1956 emphasized the same problem.  Here's an extract from the 1955 Colonial Reports, page 130. 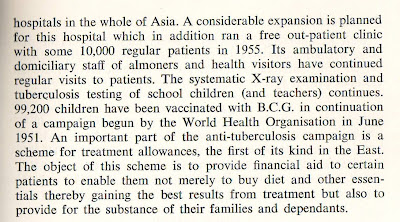 The blight caused by this disease was all too familiar for us when we were living at Kampung Abu Kassim, Pasir Panjang.  Several of our neighbours had been diagnosed and were being treated as in-patients or out-patients for that dreaded batuk kering.  They were mostly adult men,  the bread-winners of the family.  I remembered one of them, our nearest neighbour.  This was his house next to ours. 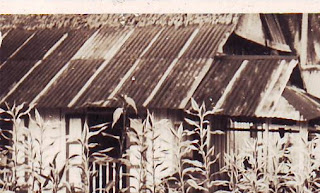 He was ostracized by many of the villagers.  They would not invite him to their houses or visit him at his.  They feared his proximity and his cough - all very understandable.  Abah, who taught about infectious diseases at the British Army School of Health, gave him some support by chatting with him now and then.  And when he dropped in for a drink, Abah made sure his glass was properly sterilized after use and it was set aside only for when he came. 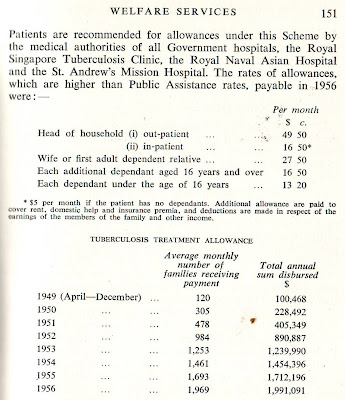 But, this of course, hardly sufficed. 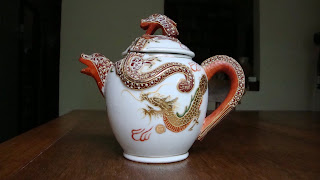 This teapot was what remained of a tea-set which was a wedding present from Hoe Huat, our kedai runcit, when my KL cousin Rosli married my Singapore cousin Salha in 1957, at our house.  It travelled from Pasir Panjang and Jalan Mas Kuning in Singapore to Jalan Giam, Johor Bharu and then to my sister's house at Batu Pahat.  She gave me this teapot, two cups and saucers and a side plate which I then packed to keep in Leicester.

To us Hoe Huat was simply called Kedai Ah Chwee .

Here is a map to indicate the location of our house at Kampung Abu Kassim (Lorong Abu Kassim) and Kedai Ah Chwee. 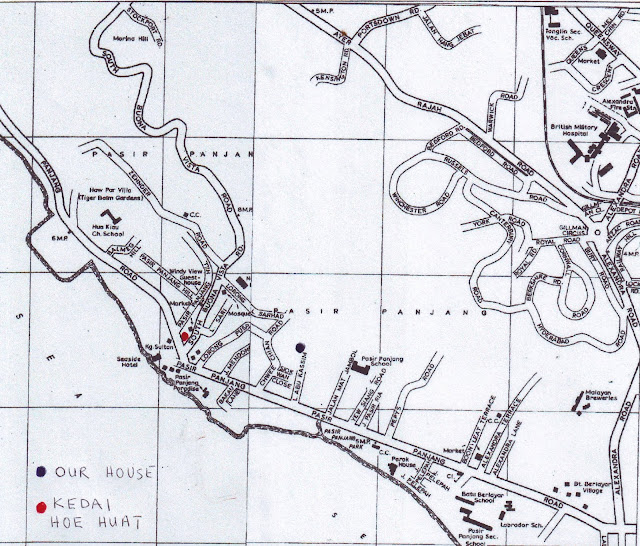 Three brothers ran that shop like a tight ship.  Ah Chwee was the eldest, the typical portly Chinese 'towkay' who worked and sweated in the shop despite his status as the boss.  Ah Seng was the second eldest, who looked (to me at least) like a 'samseng'.  He was the general factotum, responsible for the heavy work and  delivery of the customers' orders.  He was tough and as strong as a horse.  But he always had a broad smile for me whenever I bumped into him as he delivered my great-uncle's and great-aunt's five katis of rice and five katis of sugar at their house at Jalan Pasir Ria.  Sometimes, when I saw Ah Seng at the shop, he would pass me an orange or a few sticks of sweet 'kundor' as I left for home.  I started my trips to Kedai Ah Chwee from the age of 10 (I think)  and this slowly  wound down when I started  my A Levels.

The one my sister remembered  (because he was so, so handsome) was the one we called Kerani.  He was the youngest, sitting at the counter, and always immaculately dressed in a nice shirt.  He handled all the accounts for the shop and was always soft-spoken with a nice smile whenever he talked to you.

After his usual stopover to see Gemok his Chinese friend who ran the timber yard, Abah would nip in at Kedai Ah Chwee and the three brothers would always call out,  "Apa Khabar, Inche?".  Abah would chat with Kerani about various things:  once Kerani told my dad,  "Itu Lee Kuan Yew hati busuk.  Dia Hakka".

I was responsible for doing the family's shopping at Kedai Ah Chwee.  Sometimes I would walk through the 'kampungs' to get to the shop and occasionally I would ride my reliable Rudge bicycle.  I preferred to walk because I could make secret detours to the jambu air tree or the buah susu bush.  My favourite forbidden fruit was the rambutan which grew behind the fence of this Chinese house with a resident guard-dog.  Most times I was too fleet-footed for this mangy hound but there was one time when I had to flee helter-skelter for my life.

After finishing my mother's shopping list, Kerani  would tote up the amount in this notebook.

At the end of each month, I would hand over the monthly payment  and  Kerani duly wrote it down  in that little 555 notebook.

Every Hari Raya my mother would prepare a tray of Hari Raya goodies for our kedai friends.  I was pleased to be the bearer of such yummy comestibles.  Ah Chwee would make sure I got home with a bagful of fresh oranges, tinned grapes, tinned pears, tinned pineapples, tinned butter and sometimes tinned Milkmaid cheese!!  Wow!.  He knew these were the kinds of food we could not afford to buy.

Exactly when and why my father decided to open a little sundry shop I cannot recall.  It was located near the junction of Chwee Chian Road and Pasir Panjang Road.  I will never forget the name  "Malay  Trading" written on a big wooden board at the front of the shop.

Abah got his friend and  an ex-TB patient called Pakcik Majid to run the shop.  At that time, jobs for such afflicted men were scarce and beyond reach.  I remember him as a lean, tall man, often in his Baju Melayu and songkok, looking a little like the actor Haji Mahadi.

Then, one evening, we were all called in for a family conference.   My dad was in tears.  Mak was too, but I can only remember Abah's tears.  He had been embezzled of $5,000 by the man he had trusted to run the shop.  I cannot begin to think what the equivalent of that money is, today.  My mother wanted to sell all her jewellery but my father sadly told her that even that was not enough.  My sister Maznah remembered all these details.  For me, I can only remember the tears.

And this was the reason why, when my sister and I and my brother Mus came home from school all we had for lunch was rice, kicap  and ikan bilis on a tray.  No second helpings.  Sometimes this would be our lunch for two or three times a week.  But being the considerate wife that she was, mak made sure our meals with our father were more substantial.  She realised the burden he had to shoulder and he should be spared more grief.

It was also why I used to accompany my mother in and out of Pawn shops at Telok Blangah and Tanjong Pagar.

And yet my father's monthly contribution of rice and sugar to his wife's uncle and aunt never stopped.

A poignant tale maybe - but a hopeful one too  -  about Trust and Honour between a Malay man and his Chinese Shopkeeper.

about time all your recollections dibuku dan diterbitkan. powerful sentiment always, in your writings. kak maz.

I really appreciate your warm thoughts. Please nag me to do what should be done.

This brought tears to my eyes ..... he's such a man of honour. That provision shop used to supply provision to the Malaysia British soldiers...and Abah was always ever so generous with his credit facilities to the soldiers.

Yes I do remember those Malay soldiers attached to the British Army.
Abah looked after them well. Most of them were from the Kampungs in Malaya and found life in a city like Singapore a bit daunting.

Remember the 'pasar malam' at Clementi Estate where these soldiers and their families lived?

And the picnics at Tanah Merah with their families?

AsH, i told you before and will say this again. Your Dad's a wonderful person and wish mine was like him.

I'm certain if my dad had known you, he would have got on with you too

Ah.. your trouble started when the "pagar yang di harap..makan padi.. in harapkan pagar pagar makan padi..
Ours or mine started with the inability of my late ayah to accept imperfection in his work..
So when other boatmakers made one boat in 3 months he completed his in more than a year..
Luckily he got to sell the boat at a much higher price..
Nonetheless..my mathematical attempt at the peak of his boatmaking activity showed that his income was about half of his worker.. ;((

Your comment is so very interesting and fascinating. Our fathers were men of honour and give of nothing but the best. They had pride in what they are and what they do.
Looking at what's going on now in our world, their world was the golden age of good men.
But in your life you have done your ayah proud and InsyaAllah so will your children.

I am very,very touched.

May Allah bless you and yours too.

Thank you. Pak Deris must be proud of you and your heartwarming kindness.

I totally agree with Putri Kama, its about time all your recollections dibuku dan diterbitkan. A beautiful story for a beautiful man with a beautiful heart.....your Abah!

Thank you, thank you Roy,

We all have heroes in our lives and they should be remembered.

"the golden age of good men" - how apt and poignant!

There are times when we romanticise the past. But there does seem to be an absence of a code of honour among our people today.