I saw this advertisement on TV last night .  If you buy Sunday's News of the World they will give you 5 pounds in cash off your shopping at the Co-op. 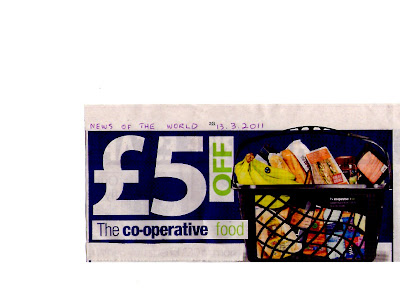 The Co-op is the nearest supermarket to our house and so I nudged the spouse to wake up. (Most nights it's the TV watching him). Look! that's a good offer! He gave me a half sleepy ominous look and mumbled "News of the World?  No way".

But I couldn't resist what I thought was a fabulous freebie.  I must admit the brain was a bit addled from a  meal of chicken stew, steamed broccoli and mashed potatoes for dinner.  As usual I had to countermand him and suggested that the fiver could get us 2kg of oats, 2 litres of milk and a loaf of Burgen bread thrown in!  He nodded off to sleep again.

Came Sunday morning before he left for his walk I reminded him of the OFFER.  He came home about half an hour later and voila! there was the News of the World  and the Sunday Express.

He bought the latter because BBC Radio 4 , in their roundup of the day's  news had mentioned  a feature in the Sunday Express about British girls found alive after the horrendous earthquake and tsunami that hit Japan two days ago.  On hearing this, we looked at each other and said "Here we go again".  Every time some disaster occurs somewhere in the world, the British media without fail will zoom into searching and publicising the Brits caught in the disaster.  The  other victims - especially the locals - don't seem to exist or get much shrift.  It's the "me! me! me!" syndrome.  I guess Iain and I are just too cynical and jaundiced and too old.  Ten to fifteen years ago the media, especially the BBC, was not this insular and parochial. 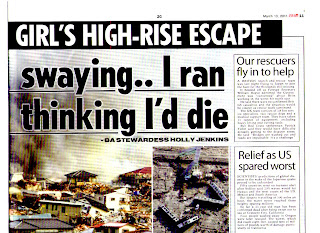 But ........ I hurriedly leafed through  NOTW, turning away from the headlines like 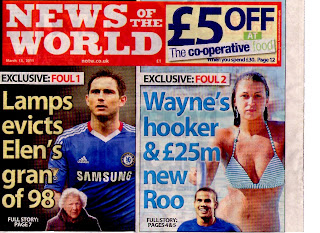 to look for my free five pounds.  Here it is. 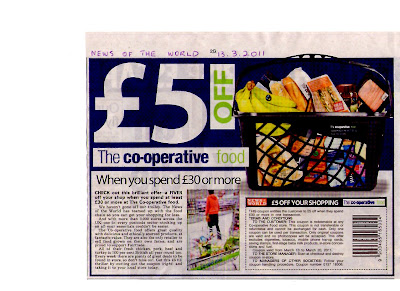 Right now I must look for a deep hole to hide in and escape the spouse's look which said "You've been had!"

Come here and get yourself under the teacher's table - as you're too bloody tall to stand on the chair!!

I prefer kati and tahil - just being old-fashioned.

I know. Sogo had a sale once(it always does, anyhow) and I got hubby to tag along promising a lot of discounts and savings. So we bought our stuff. But whatever were on discount were the 'Xtra size' products. We bought our regulars: the medium or small packs; they were just at normal prices.

It pays to read the whole ad, that's what it is.


hahahahahah... only Animal Rescues can be trusted I guess !

So pleased to know I'm not the only idiot around.

I, or rather Uncle bought 2 surat khabar - but got velly nauti pikches of girls.

We almost fainted - uncle that is.

But do you remember when mak bought a little pot of a limau kasturi plant which had several fruits on it? She took it home to tranplant and discovered it had no roots at all. Poor mak.

The moral of the story is : It's not my fault. It's the genes I inherited.

Now I wonder why Hana is prone to bashing up her car!!!!

hahahahah....I remembered that !But nobody laughed I think.
Hana...I don't know. I hope its neither habit nor hobby ! One good thing though...now the insurance can repair for two accidents because she didn't sent it to the workshop after the last knocking....not bad ..one claim, two repair jobs...

Buy One, Get One Free.

But what Hana went through is frightening. I've had several when I was younger, but I'm not telling.