SPILLING THE BEANS - by the Stinging Detective

It was a dismal, torpid Sunday. This detective wanted (not needed) sustenance and wanted it fast. Out of sheer boredom she switched on the e-mail expecting the usual bills and court orders. But there was something special from Canary, a connection from way back. She had just obtained a photograph from Karang Guni King Kumar (5th from right in the photograph), an ex-student from Jurong Secondary School.

I saw my chance to make a deal because there was a big fish in this photograph, someone I could squeeze for profit. So a few days ago, I dropped him a line and gave him an ultimatum - pay up 5,723 thosais ( complete with dhal and chutney), or 579 cheesecakes from that good-looking broad, Ruqxana, from Cookery Magic. The fish refused to bite so ... I shall make him eat dirt because here's that incriminating photograph hee, hee, hee. It's a laugh-a-minute!!!! 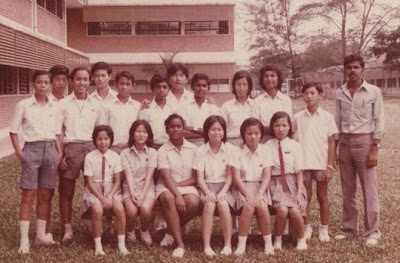 Now put on your shades because this closeup will be a real eye-sore.

Well, now that the Agency's bearded factotum has finally got me my strong, hot black coffee, I can begin to expose the shady goings-on in Jurong Secondary School during the mid 1970s.

So, to begin at the beginning. There was this shaggy bunch of wannabe dropouts - a mixed bag of rainbow colours and cultural affiliations. Those last two words, of course, would be gobbledygook for this Gang in those days. They were used to earthy words like Mamak (for Indian), Malaikwai or Melayu Blachan (for Malays) and China Bukit or Sepit (for the Chinese and Peranakan).

This Gang had no name and no leader because they were all bloody-minded about their independence and the integrity of their pet schemes - like escaping to the roti canai stall at Jurong Market during Art Class. They had no written Constitution because they were always changing the rules and moving the goalpost to suit their purposes. But they were avowed to just one cause - to buck the school's system, whenever and where ever they could - because for five hours a day they had to contend with a regime of narrow-minded, despotic school administrators, nicknamed the Nanyang (University graduates) Mafia.

The Big Fish I was trying to hook was Samseng A, as seen above. Do not be fooled by that cute well-scrubbed look, like butter won't melt in his mouth. As for those white socks, what you see is only the tip of the iceberg. The rest is just spotty black and quite horrendous and that goes for the rest of The Gang.

JSS imposed short pants for all the boys including the Seniors. For the latter, that was really unacceptable because long pants were the symbol of manhood for these teenagers running high on their testosterone. Samseng A (SA) decided to test/mock the rules by wearing a pair of trousers that looked like it could not make up its mind - to be a pair of regulation shorts or long shorts? What the regime did to him is best kept a secret.

Just to the left of SA was the other dominant male of this Gang - Big Bad Ben. They called him The Hitman though sometimes it was Hit-and-Miss. One reason for this monicker was whenever he opened his mouth to sing "And I have to say I love you in a Song" to his secret paramour in The Gang he got pelted with banana skins and a barrage of @&*+"%#. But despite his heartache he managed to devise many devilish schemes to cause chaos and havoc to The System. Looking back, if he had only grown up in a society that engages and develops a student's imaginative and creative talents, he would be a writer today, and a fine sensitive writer too.

Every authoritative body, even such a nefarious Gang, needs someone to fiddle the books. For this, there was Yuwrajh(7th from right) - because he was the only one in The Gang that could add up to 10 on his fingers. All the rest of them were called "platypus" (a mammal that lays eggs), by their mathematics teacher because they never fail to score a zero in their mathematics examination. Samseng Y was such a rotten accountant that he always ended up being owed money by the rest of his mob. This nice financial wizard had one flaw however. He couldn't spell for nuts. He was mercilessly taunted for sentences like "The sun sat in the west" and "She wore a beautiful diamond neckless" . So he ran away to London where he is happy because, over there, there are lots and lots of Brits who cannot spell either.

Then there was Rojiah the Dodger(3rd from right), like Roger the Dodger in The Beano. She was their Getaway Gal. She was good at getting them out of tight spots because she was also the School's Head Prefect.

And here's my source - the one they called the Canary.

This doll-like creature was the Gangster's Moll, caught in the eternal love triangle with SA and The Hit Man. It was like a choice between a rock and a hard place. Wisely, she found her own comfort zone away from those two brooding Jurong Romeos. She still plays a mean guitar, and there are rumours about a secret song she used to sing for SA only.

There are two other members who are not in this picture - they were mainly part-time Gangsta Gals because they suffered very strict curfew hours. One of them was Lely - or the LadyBird or the SS. SS is not the Secret Service but the Shxx Stirrer who specialized in knocking the System. Her main coup was in noticing the love bites on a certain young teacher's neck and for once this teacher managed to retain the class's attention.

The other was the Omnipotent Oi Bek - the Serious One - who made sure The Gang left no traces of their presence. She also saw to their insurance cover.

The Gang's Nemesis was of course the Nanyang Mafia running the school - led by Johnny Louse and Two Pee Sang (The names have been changed to protect their identity.) Partly, it was all a matter of those long trousers. Remember, all boys - including seniors - HAD to wear shorts - so that the school could let it be known just who was in charge.....or just who wore the pants!

Now, it was bad enough that Samseng A already towered over them when he was 15. And as for the others, by the time they were 16-17 about 80% of the boys would be taller or as tall as the Nanyang Mafia.

But my concern here is Samseng A, the truculent one who was reckless enough to gamble his present and future standing. This daring sleuth can now reveal that(even in those early days) Samseng A was a shadowy man, there was something of the night about him. He was, like the bats and foxes and Vampires and Draculas, a nocturnal animal. He was almost always semi-comatose during the day and only came alive after dusk. Some girls believed his dozey eyes were a sign of a simmering sizzler - a PHWOAR! But, really, he was just sleepy!

He puts on this air of somnolent nonchalance to disarm his opponents. But those eyes were saying, "Just you dare cross the line." What you see is not what you get!! He was not known as "The Samseng with Velvet Gloves" for nothing.

Well, for a Malay kid who grew up in Kampung Jubilee, off West Coast Road, Singapore - and who is not a product of pukka schools like Raffles Institution or Anglo-Chinese School - this SA, this lad - has gone far. But no matter how high and how far he has been, he does not forget his old friends or where he comes from.

They call him "Rocky" in Malaysia. He's a somebody in Malaysian journalism. He has always been his own man - ever since he stood up for himself when the Disciplinary teachers of Jurong Secondary School wrongfully entered his family flat and ransacked his room to look for 'stolen' artworks.

But he's still "Din" to his old teacher. And I can still cuff him about the ears if he crosses the line. Basically, though, he's a good lad.

Post Script: The most recent photo of SA with Canary on the left and LadyBird on the right. 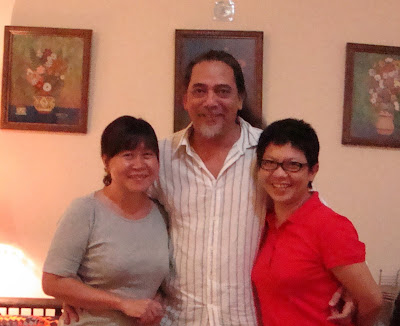 AsH, the boy standing next to Din is Snaw Feng and he jatoh hati with Bek while in Sec. 2.

ph,
How did you get to know all these stories?

This photo is very dear to me mam. Almost priceless.The almost always anti-establishment classmates from JSS were a wonderful lot and always will be but most of all THANK YOU for being our teacher and inspiring us all one way or another.

Salam AsH,
It always amazes me.. your entry.. just exquisite.
Thank you for sharing

Dear Kumar,
THANK YOU for that photograph and I can feel how special that photo must be to you. I feel the same of some, or rather, many of my photographs.
That lot of your classmates were not just anti-establishment. The regime was prejudiced and not at all evenhanded towards the English stream - there is a breaking point when the denial of justice will cause friction.
I was in the hornets' nest and I know.

Salam and thank you Wan Sharif, You are always very kind in your comments. But this particular posting: I enjoyed writing it - like a Philip Marlowe detective story!
And thank you for enjoying my quirky writing. Take care.

Hahaha! This is entertaining! Thank you very much, Ms Hamid :)
You have spiced up an old photo of a nerdy bunch and turn it to a fun and interesting read.
- That so-called Canary

Canary and Ladybird, very interesting story and delightful reading. It sure put a smile on my face!

Welcome Roy, good to see you again.
You do have wacky friends but you're just as mad as them too.
Take care. How's the winter in Perth?

Oh yes mam! The Crew-cut Commies event sent the police to my house just after the 'O' level exams on a false complaint that I had damaged school property.
I didn't bother going back to the school to prove my innocence. It would have been a waste of time talking to slope-headed idiots anyway.

Hi Ash! After the long hot summer, winter is a blessing especially for the gardens and reservoir! No
matter how wacky my friends are, there is always a special spot for them in my heart. I am mad alright
and truly(how embarassment as they say it here)to my children, hahaha

Gosh,
I have nephew who looks just like that boy with the seluar panjang sampai lutut. Haha!

Thanks for the memories Ms Hamid. And Kumar, see you in SIngapore soon, mate.