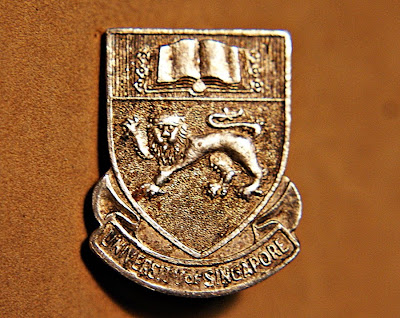 My Abah and I had no idea how my university studies were to be funded. We knew about free education for Malays up to University level. I was to discover later - when I was teaching at Yusof Ishak Secondary School - about the Government's strict definition of a 'Malay'. When your birth certificate and identity card - and your father's too - indicated your race as Javanese, Indonesian, Arab and Boyanese, you were not eligible for free education. Especially in Singapore, the Arabs, Javanese and Boyanese folks were keen to set themselves apart from the Malays. As for the Chinese, the Hakka and Hailam were regarded as 'different' from the Cantonese, Teochew and Hokkien. The Indian community was also divided amongst the Tamils, Gujaratis, Sindhis and Sikhs and of course the caste system.

When I finally passed my HSC we had to start thinking hard about finance. I supposed, at the back of my dad's mind, he felt we could muddle along on his salary as two of my siblings were now financially independent. But he was realistic enough to know that the frailty of his health could not guarantee me a secure sojourn at University.

He must have written to, and received a reply from, Pa'Tua Haji Majid (his half-brother) a Senior Administrative Officer in the Education Department in Malacca when he asked me to sit down for a serious discussion.

It seemed Pa'Tua could use his 'connections' to enable me to obtain a Selangor State Scholarship as I was born in Selangor; and so was my father and grandfather, who were of Tanjong Karang origin. Pa'Tua believed that I would not encounter any problem as he had seen how even applications for Secretarial Studies overseas were attended to - depending on the strings and cables you could pull, of course!

At that time there was no strict demarcation between a Singaporean and a Malaysian. In fact my Singaporean cousin, born of Singapore-born parents, moved to Kuala Lumpur to further his studies at Universiti Kebangsaan Malaysia. He thrived on the generosity of the Malaysian Government who subsidised his education all the way to post-graduate level.

I must admit that Pa'Tua's suggestion was a shock. I had to think hard. I looked at Abah and I knew he was giving me the option to decide for myself. He was not an autocratic father, not my Abah!! Somehow it was quite an easy decision for me.

He looked so relieved when he heard my decision and he said, "We started this journey together and we shall finish it in the same way." I was so pleased at our concordance and so proud to be my father's daughter, made from the same mould - truly "anak si Hamid". 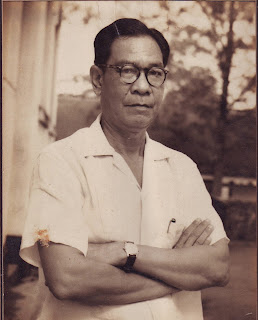 So I applied for a Singapore Government Teaching Bursary which was not too difficult to secure because they were upgrading the teaching profession. Many graduates cocked a snoot at becoming teachers and so the Bursary was like a carrot to entice graduates into teaching. During that time, if you were a graduate, especially with an Honours degree, the world was your oyster - well almost - all other things being equal.

More daunting was getting into Singapore University. At the very minimum you had to pass at least two subjects at Principal level (grades ranging from 1-6) and two more at Subsidiary level ( grades 7 and 8). Grade 9 was a Fail. Even with these credentials, you might have found yourself on the waiting list. However a Credit in Mathematics at 'O' Level would be a boost. But the one major stumbling block for entry was the General Paper which consisted of critical comprehension and essay writing. I knew of some of my peers who scored good Principals but were denied a place because they failed the General Paper.

And so I spent three years at the Bukit Timah Campus. And my dear Abah, despite his poor health, kept on working. We all could see how tired he looked at times and I just wanted time to fly.

I recalled his response when my uncle, Pa'cik Omar, congratulated my dad when I finally graduated. He simply said, "It was all her hard work." Only a loving, honourable man and father could have the courage and magnanimity to make such a statement. My love for my mother is boundless but this unique Malay gentleman is irreplaceable.

BUT my education did not end after the much sought after Degree. I was about to be enrolled into the school of hard knocks when I ventured into the teaching profession in Singapore.
Posted by anak si-hamid at Wednesday, June 23, 2010

You meant cock a snook, no?

Ah, well. Its comforting to know that in the good ole days too one needed strong ropes to swing like Tarzan through life. Today strings of A+s mean nothing without those cables snaking their way into the right corridors.

But entry requirements for Uni and exams were tough, I agree, especially in securing that magic GP grade.

But today our experts, with the DPM, no less, leading the pack, are planning to do away with exams for the tender ones.

Apparently it will encourage "innovation, and excellence in sports." Spurious correlation, that, if I remember my statistics prof correctly.

i have always enjoy reading about your dear Abah, such a wonderful man.

And yes, i agree with Kumar - you must write a book.

Dear Mr Bojangles,
Thank you - your comments are alwaya "a sight for sore eyes".

Isn't it wonderful - we are both right! Both snook and snoot are acceptable. Snoot is another word for snout. When we point our thumb at our nose and wave sideways the other four fingers like a coxcomb, it's a sign of teasing derision. Anyway it's better than having the snout in the trough.

I love that image of snaking cables through the corridors of government institutions. I had hoped by now these people would get hung on these cables.

Indeed, this is the era of dumbing-down, to turn the young into passive, greedy consumers - the old tactic of giving them 'bread and circus'. This is also happening in UK where I have read of one College teaching a course which included a lesson on how to put on covers for the duvet.

With maids running the domestic scene nowadays, the schools/Colleges might have to teach a course on bed-making.

Dear Kumar and ph,
Do I know you two from somewhere in my dark past ha ha! Thank you for dropping in.

It was my job to get you lot writing 'compositions' in JSS and now you're nagging me to write a book!

I've got too much to do, like packing to go to Singapore tomorrow.

Take care.
And Kumar, what does SK-NKP stand for?

Thank you Wan Sharif.
You have children and one day, your offspring will express the same appreciation of their father.

I second to Kumar and PH about you writing a book! What a wonderful story about your Abah, brought tears to my eyes....