There was only one Government Girls' School where you could do your 'A' Levels. I found myself at the pukka Raffles Girls' School, located at Anderson Road.

I felt very much like the poor country, or rather, kampung mouse in my classroom. There was an ongoing, subtle pecking order at work.

Firstly, to be acceptable you must have attended Raffles Girls' School at Secondary level and if you were also a pupil during Primary School, you were absolutely pedigree class. As for me, my humble lineage came from Crescent Girls' School, for a lower and middle class catchment area. My Pasir Panjang Primary School was but a very provincial kampung school from the then rural west coast of Singapore.

Secondly, your father had to be a so and so. It was not money that counted, that was just a good standby. Your old man should be a member of the upper echelon of the social order, the aristocracy of the influential and rich. It was a kind of secular feudalism - no need for titles like Rajas and Tengkus and Datuks. If you were of a certain breed, it was noticeable in your outfit and your airs.

We had a girl whose father was the Speaker of the Legislative Assembly and another whose parent was the Secretary of the same outfit. Many of the proletarian newcomers sought the friendship of both girls, although the latter had already made up her mind that she had no intention of expanding her coterie.

I must admit to feeling like an 'ugly duckling'. You would like to make new friends but, hell, if I have to devalue myself just to be accepted as a member of 'The Group'... Like they used to say, 'bo chap' or "I couldn't care less".

But I did make one concession so as not to stand out like a sore thumb. When I started my first year at RGS, my ole mum, as practical as ever, had bought for me the cheap, rough cotton material for my school skirt. Its texture was almost similar to that used by the 'Samsui' women (Chinese women labourers who all wore the same blue and black 'uniform' ). And it was not the right shade of blue. It was more indigo blue than navy blue.
When it was being washed, the colours ran like the Nile and I am certain that after a few months the skirt would turn to pale indigo blue. It had to be starched otherwise it would not iron well. Of course, after ironing, the skirt would stand up as stiff as a ramrod and you ended up looking like you were wearing planks instead of a languid flowing skirt.
Each time before you sat down, you had to very carefully and sedately 'smooth' down the back of the skirt to keep the stiff pleats intact. If you failed to do so your rear would look like an unmade bed when you stood up. At 18, that was a terrible embarrassment to shoulder.
I could not remember how I plucked up the courage to ask my mother if I could please have the latest in-material, the more expensive polyester-tetoron that was crumple-free, drip-dry and did not require ironing. We compromised and she gave me what I wanted. But I could have only one skirt made of that coveted material.
That skirt beefed up my confidence no end at RGS. I made sure that on Wednesdays when I came home from school, I would immediately wash that precious garment, put it up to dry (it didn't take long) so that I could wear it again on Thursday morning. Sometimes it would remain slightly damp at the waistband but ... who cares? Style and pride took precedence over common sense and I stopped feeling like a Cinderella-poor kampung mouse for the rest of my A-Levels.
And here's what that nerd looked like in her polyester-tetoron skirt and her first non-homemade school blouse bought during a sale at Wassiamull. 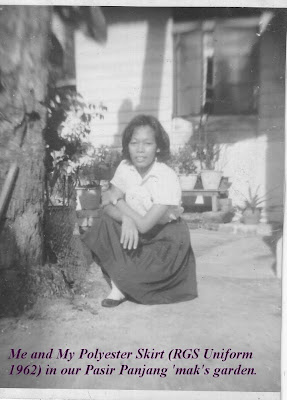 And here are what those two years looked like with Miss Lim and Miss Cohen as our minders. 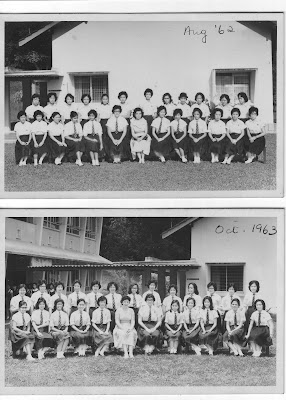 P.S. If any one mentioned in the previous posting choose to make any ha ha remarks they shall not taste my special Fruit Cream Salad forever and ever.
Posted by anak si-hamid at Thursday, June 17, 2010

Oh kak! Those photos are great. That makes you my super-super grand senior at RGS (I attended RGS 1985-88 and we had pinafores then)

There was more common girls when I was there although I do remember Mrs Lim, my maths teacher, telling us President Yusof Ishak's daughter used to be there. She absentmindedly told the girl to ask her mum to see her and the next day the First Lady was there to meet the teacher.

Thank you melayudilondon,
When you were in RGS, I was already a middle-aged lady ensconced in Leicester!!!
Oh yes, those pinafores were so, so English schoolgirl style.
Thank goodness I didn't have to wear that at 'A' Levels.
I also think that 23 years after 1962, the social structure in Singapore had changed so much and Government schools like RGS were told to be more 'democratic' in their intake.
Also by that time there were many more candidates for A Levels and many schools had their own 'A' Level classes and the Government were also constructing more Junior Colleges for Pre-University students.

Salam Kak AsH,
Thank you for bringing back the memory.. Back in the early sixties, my mum had bought for me the cheap, rough cotton material for my school short... then I was in primary school..
Look like we were in the same boat.. the difference was, in Pulau Duyong there are no pecking order at work.. every body was practically very poor.. fisherman and boatmakers alike..

Dear Wan Sharif,
Bless our mothers for trying to stretch limited resources so that we can get an education and have a balanced meal on our table.
It would be interesting to read of your chilhood recollections on your blog.

Dear Kak AsH,
Will follow your advice InsyaALLAH.. I should write about my childhood soon while my mother is still around for me to refer..

I remember those days of prefects waiting by the school gates check our hair not below collar, girls skirts must be below knee, etc, and its 500 to a 1000 lines depending on number of offences.

Had a Form 5 girl prefect enjoyed catching my friends and I just few minutes late, but a very handsome fellow, rich too she smiles and looks other way.....and he 10 minutes late.

I guess she did not appreciate discovering big lintahs in her desk, or a fictitious letter from handsome boy inviting her for a movie date....she went, he did not.
And next day he was busy writing out 500 lines, "I must not be late for school'., ha ha ha.

Thanks for the memories.
You have a pleasant weekend and keep a song in your heart, Lee.

Well mam, that so called "ugly duckling", was a wonderful teacher to us all. So do I get the 'Special Fruit Cream' salad?

hahaha...you had that...I had my home-made uniform too. My school short pants was always light blue instead of dark blue. So I stand out in a crowd - for the wrong reason.....

Mak would yell for me to come in for a 'fitting' . Standing near the sewing machine always made my body itch. Scratchin would always invite a swipe on the shoulder telling me to stand still.

Uncle Lee,
Thank you for your comment. I was a prefect too, but I was horrible to all!!
I can see you were a wicked one but that creep of a prefect deserved it. Wish we were in the same school.
I had such a good weekend that I was late in this response -apologies.

Sunnysideup,
Thank you for reminding me how mak sewed all our uniforms including Abah's.
I remembered that she learned to make all those professional shirts and trousers from Cik Rahim.

Indeed, bless them both.

Dear Kumar,
I'm touched that you remembered and appreciated. That's all a teacher really wants. Thank you!

By the way, I somehow lost your second comment - I admit to being a low-tech idiot. But again thank you for your kind comments. For me, it's like getting a good report from an ex-student. Do I get 10 out of 10?

1962 , HSC for you?
It was 1956 for him and he never completed it!
Somehow by 1962 he had just started to shuttle between Macpherson Road and a sea-front office on Collyer Quay, smartly dressed in a white shirt, tie and all, no longer in school uniform. And Lido Cinema was not unfamiliar to that young bachelor. Your path and his must have crossed somewhere, on Scotts Road or Orchard Road or at Lido, perhaps. Fancy that, today, almost 50 years later your path and that young (alas, not very any longer) man’s have crossed again in a different kind of world.

You know, as a punishment for not finishing his HSC then, this old man (because he is that today) has been struggling over questions involving Pythagoras Theorem, Newton’s Laws and Hubber’s process etc, keenly watched over by young boys and girls. One wonders whether he will ever make the elusive HSC and be in position like yours, relaxed with time to sit and write.

Then in your response to an earlier visitor you mentioned “ …middle-aged lady ensconced in Leicester …..” in the mid 1980’s. Now that is funny indeed. He was not far from there around that time, driving along the M1. And about half a century ago he used to go to Leicester just for the taste of curry in one of the Indian shops.

Those were the days, good old days. Such is life when you start to reminisce.

Dear Al-Manar,
Thank you for your delightful comments. Old? No, never! Not for someone with such a lively mind as yours.

Strange, we were like two ships (or two trishaws) passing in the night. One from the east coast of Singapore and me from the west.

As for Leicester - no, don't tell me anymore - the coincidence is too much. Perhaps we could have a re-run of the journey along the M1 to Leicester, walking stick or no walking stick.

I think if you and Uncle Lee and meself were in the same school, we could have had a rollicking good time or perhaps get expelled!