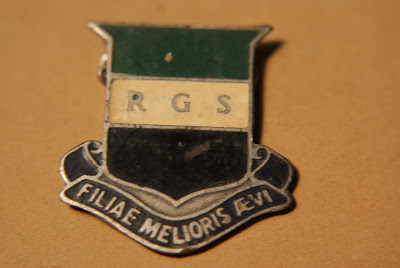 Pre-University I (or the Lower Sixth) turned out to be a lot of fun. We were fortunate to have a little room attached to the back of our class. During our Mathematics lesson, which was forced upon us for reasons known only to the school administrators, about 8-10 of us would hide in that back room to escape gentle Miss Lim, the mathematics teacher ...and....practise a really spiffing retro-dancing - the Charleston!!! In that back room we were 'quietly' flapping our arms and kicking our legs while humming tunes like this one.

OR, we would skive from classes, especially after break time and make a dashing getaway to the main road to pick up the bus that would take us to Lido Cinema at the junction of Scotts Road and Orchard Road. As we were skint we bought the cheapest ticket for one dollar and at the end of the screening would end up with a stiff neck - from sitting right up in the front row. But when you're young, there was only pleasure to be had, even in a cricked neck.

Each day, to get to RGS, I had to take two buses. There was firstly the Keppel Bus from Pasir Panjang to Telok Blangah. Here you picked up no 21 STC (Singapore Traction Bus) to get you to Anderson Road. It was a hassle despite the chance to meet up with the dishy looking boy from St Joseph's Institution at Telok Blangah bus stop.

I much preferred to get a lift from Abah on his way to work at Nee Soon (now hanyu pinyinised to Yishun) even though it meant leaving our house at six thirty in the morning. But I quite enjoyed being the first one to enter the school gate and having some time alone with my dad - precious time for an 18 year old daughter to chat with her 52 year old dad. He would stop the Armstrong Siddley in front of the school gate and I would wave him good-bye as he drove off.

Then, when I was in Pre-U Two or the Upper Sixth, my father had his first heart attack. We were all shocked and very frightened. Our father, our tower of strength had been sapped of his vigour and energy. His big strong heart was impaired and damaged. Our main concern was his long-term health and we thought the only recourse was for him to retire. My elder sister had just completed her teacher's training course in Johor Bharu, my younger brother was just about to start at the Singapore Teachers' Training College and our youngest brother was still in secondary school. And at 19, when most youngsters my age would be working, I was still a schoolgirl!!

It was on one of those journeys to school with my dad after he had recuperated from his heart attack - when I suggested to him that I wanted to stop my Pre-U and look for a job or perhaps enrol at the Teachers' Training College. Teachers in training were usually given an allowance. I decided on this because between the three of us we could support the family and Abah could retire. I had thought long and hard on this decision and I just wanted his permission and blessing.

He didn't blow his top or jam on the brakes on hearing my bombshell. He very firmly and quietly said that I must get my Higher School Certificate (A Levels) and proceed to University. That was the end of that!

My dad carried on working despite his ill health and did not retire until four years later when I graduated from the University of Singapore in 1967.

It was some time coming, but I grew up good and proper in 1963. My dancing and skiving days were over.
Posted by anak si-hamid at Monday, June 21, 2010

Doing the Charleston while Pythagoras was expounding his theorems through the mouth of Miss Lim? Whassa matter with you lass? All that geometry would have prepared you good and proper for the lucrative art of pyramid selling.

Er, your school motto: does it mean The Melur is not an ivy? For your school song, go here:
http://www.youtube.com/watch?v=9D-z9GXry6M

Oh that badge!
How I miss my days in RGS.

AG - hilarious as your interpretation is, the motto translated is Daughters of a Better Age. I do like your version better, bang.

Dear AG,
Pythagoras? Was he a member of a sixties pop group? But I know he was no Charleston dancer.


melayudilondon,
Thank you. I keep all the badges from my schooldays. We used to unpin that badge whenever we got to Lido - had to protect the school's good name.
Also thank you for enlightening us about the school motto however captivating AG's version is.

So I cannot discuss that Bernoulli's theorem of fluid mechanics with you then..he,he,

Sure appreciate your father.. he remained steadfast that his beloved daughter should finish her education, continued working despite his ill health..

Dear Wan Sharif,
Thank you.
If Bernoulli's fluid mechanics involves cendol, then I am THE expert.
Where I'm concerned, anything scientific has to be linked with something edible.

no, sharif, kasih bapa mengikut kata. and she graduated as he wished. it's kasih ibu that's sepanjang masa. sheeeeh, you anglophiles have it bad!

Dear Kassim,
Thank you for your defining contribution.
However we express it - in whatever language we use - the description and significance of our love and gratitude to our mothers or fathers do not need any embellishments.
A rose by any other name smells just as sweet.

What a heart warming story ASH. All the hard work is paid off with your graduation! Kaseh ayah tidak kemana.... Will you and uncle teach us the charleston when we're there? hehehe

Thanks for translating the Latin phrase for me. I went to a school without a motto. The VI, it was called, and it was really an institution, which, as you know, is what they used to call the mad house. Then a Mat Salleh headmaster came and thought, well, this is strange, now I don't know who or what I am (he was a bit Cartesian), so he gave us a motto: Nihil Nisi Optima. I thought it sounded like something from Hindustan. But he promised us (the HM I mean, not the Hindustani) that it meant 'Nothing but the Best'. Then the Mat Salleh went, and we quietly dropped 'the best' part and opted for 'nothing'. So, until today my school has nothing for its motto.

PS I am a collector of Girls' schools' mottoes. Among my favourites is 'Upwards and Onwards' [Excelsior?]

Thank you ASH for this laluan.

Dear AG,
A collector of Girls' Schools' mottoes? What next?

You are always very welcome here but next time can you bring along a 'fruit of the hand' like kropok from Trengganu? Thanks.

Roy,
Thank you for popping in.
Please have pity on these rickety old knees. Perhaps Uncle could teach you how to rock and roll i.e. collecting rocks and rolling them into his rock garden.