When we got home on Monday I found this mail from Bride. 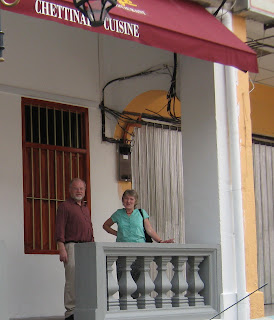 Graham and Bride
She wrote, "I've just received this from someone I occasionally get a massage from. My instinct is to send back some comments, probably equally inappropriate. I don't feel I can ignore, but maybe I should. Any hints on a reply that is balanced ...."

The article began like this. "These are troubling times. This was written by a woman born in Egypt as a Muslim. This is not heresy, and it will scare you." This was the sentence at the end of the text. "This is your chance to make a difference....! Pass it on to your email list or at least to those you think will listen"

Titled 'Joys of Muslim Women' by Nonie Darwish, it represents a piece of writing from the stable of rabid, evangelistic Islamophobes which has been circulating on the internet since October 2009. Darwish claims 'a man can marry a child as young as 1 year old and have sexual intimacy with this child, consummating the marriage by 9.' More gory stuff followed. What she later claims is the most threatening - that 'In twenty years there will be enough Muslim voters in the U.S. to elect the President by themselves..' !! There are sites that claimed this is not her writing although she said it was "to a large extent accurate." Even if that is so, the content of this chain e-mail is dangerous and provocative.

For more details read this this

I seem to have a problem linking to this site. Please search under "Joys of Muslim Women" by Nonie Darwish.

Bride's big brother (the spouse) had written her some ideas for a response. But she had already done one earlier, a level-headed and fearless riposte. We could not have done it any better. And I want to share her reply to her masseuse with all my readers.

Yes that email did scare me. I was shocked to see such an anti-Muslim tirade and found it tantamount to hate mail. How can we ever hope to have peace and harmony in the world when such radical and off beam views are being circulated.

This woman alleges "propaganda and hatred are taught to the children from birth", yet in my opinion is engaging in what she accuses others of. She is, from my further reading, a radical activist.

As for the town of Dearborn ... yes it has a large Arab population. Most are descendants of those who went there in the early 1900s to work at Ford Motor Company ... around 100 years ago. Most of the Arabs in Dearborn are originally from Lebanon or their ancestors are. Lebanese are almost entirely Christian. But regardless of their religion she is scaremongering. She is virtually labelling all Arabs as Muslims and all Muslims as child molesting paedophiles, intent on death and destruction.

Spreading these sort of views is dangerous and will never help us understand our fellow man/woman. I do not have any particular religious beliefs, tho we live in a predominantly Christian based society with the values such as, God created us all equal, and others such as, an eye for an eye!

Yes I did 'send on' the email, to my brother and sister-in-law who are Muslim. She and her whole Muslim family have welcomed us with open arms. They are loving, caring, warm, friendly people and they are not a threat to anyone. The women are liberated and well educated. They choose whether to wear a scarf or not, and all the other issues in their lives. They are not married at 1 yr, nor do the men treat them badly or have multiple wives.

Our time would be better spent looking in our own back yard at child abuse, violence and racism in NZ and putting our energy into addressing that. Rather than buying into one woman's view and judgement of a whole religion, and many races, on the basis of what?

PS please remove me from your email list for such mail.

Thank you very much Bride. You're a typical daughter of Buchanan and wife of Coe.

Salam AsH,
It is good to have someone who is not Muslim but knows Muslim from first hand experience to refute writing from the islamophobes..
I love the part where your SIL wrote "Our time would be better spent looking in our own back yard at child abuse, violence and racism..."
Thank you for sharing..

Wan Sharif,
Thank you for your contribution. My Kiwi relations are always willing to speak out against injustice and stupidity in any shape or form.

Thank you ph. You will be able to meet her face to face in a few months.

Isn't it wonderful that a non-Muslim like Bride, makes the effort to set things in perspective while our own just 'bo chap'?

Sunnysideup,
Too true, too true.

I somehow think that the Muslims' (not Islam) apathy and self-righteousness also contribute to and sustain the Islamophobes' objectives.