FRIDAY : Arrived at Jai's flat at 4 pm. Got diddled by the taxi driver because he took the longer route. He was a middle aged, grumpy looking bloke with a pony-tail.
Lely dropped in to stay for a while. We didn't get to bed until past midnight because we had lots of catching up to do with Jai. We have not seen him for nearly seven months. We decided to call it a day because of sheer tiredness and furthermore, Roger Federer, Jai's tennis hero was about to start his match.

SATURDAY : Went to Pusara Abadi. They have now planted grass in between the blocks. 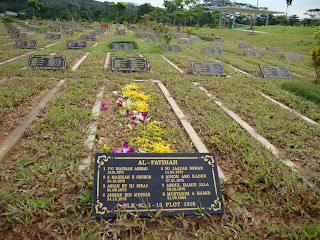 After Pusara Abadi we stoppped at my favourite shopping Mall. No, it's not C.K. Tang (ooops, I should say Tangs, just like Robinsons or Harrods or M&S) or Takashimaya. It's Boon Lay Shopping Centre!! First we had a late breakfast of yummy, scrumptious, and delicious lontong.
At the Singseh shop we bought Bosisto's Oil of Eucalyptus, a hot favourite for folks our age. This old shop still had the wall of shelves which displayed all kinds of medicine, pills and ointment. I preferred this to the garish, stylishly-shaped counters in the modern pharmacies. But then, what do you expect from the likes of us.
Of course I had to buy my special towels 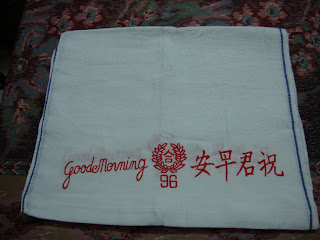 made of soft fine cotton. They reminded me of the times when mother would be scrubbing hard on my face, neck and arms with those towels. I also recalled camping days when my friends were using posh towels in colours of pastel blues and pinks and yellows. I only had my 'Good Morning' towels because my mother could 'clorox' away the dirt and marks to turn it pure white once again!

I also wanted to visit Nancy. Although she was from the Chinese Stream in Jurong Secondary School, she still remembered me when I visited Boon Lay last year. We bought a couple of items from her shop and before we left I said this to her.
"I hope you will still be here, Nancy, when I visit Boon Lay again."
She gave a philosophical reply, "I think I will be here forever, Miss Hamid."
Here are the two of us in front of the shop. 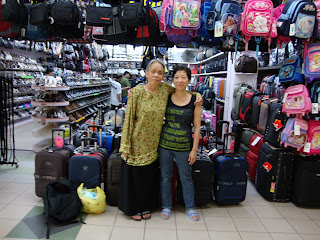 Someone like Nancy makes teaching such a privileged occupation. Although my departure from Jurong Secondary School left a nasty taste in the mouth - they could not take away from me this joy and pride - when your student remembers you, 30 years later.

We then proceeded to Boon Lay Place to visit Jai's mother. On the way, the spouse made a new friend. 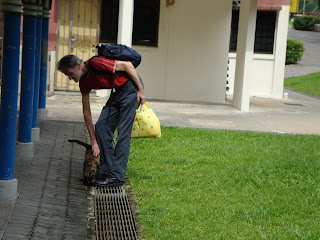 I could kick myself for not bringing a spare 'film' to take photographs of this visit because that picture was the last one available.

SATURDAY AFTERNOON : With pickled herring aka Lely, we went to see our first male strip show in Singapore or anywhere else for that matter, at the National Library's Drama Centre Theatre. 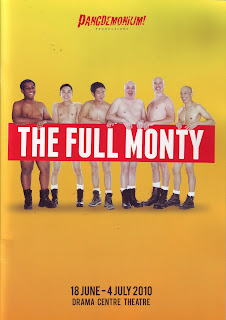 We have seen the original movie. We liked it because it portrayed a moving story of Thatcher's Britain. This "Full Monty" seriously tackled the issues surrounding unemployment, working class culture and custody rights of fathers and other socio-economic problems. The matter of bare derrieres was not the centrepiece of this drama.

However, this Americanised Broadway version is too "Broadway" with its usual razzmatazz of singing and dancing and the cliche one-liners you get on American 'sit-coms' to get you rolling on the floor with laughter. There is more to "The Full Monty" than the titillation of male strip dancing. But then we are out of sync with modern tastes or perhaps we come from another planet.

Years ago as I left the Lido Cinema after the movie "One Flew Over the Cuckoo's Nest" I overheard a comment: "Lousy movie lah. Not funny at all." As it was set in a hospital for mentally ill patients, she expected a lot of comical slapstick scenes to make it worth her time and money!

How we pander to the lowest common denominator!

But all in all, it was interesting entertainment. They put on a good show and a lot of hard work had gone into the performance. However, the screeching female singing was like a choir of Ethel Mermans and Barbara Streisands.

SATURDAY NIGHT : We met up with the rest of the girls and Shyama who had just turned up from Jakarta for a holiday. By then we were absolutely knackered - though the 'tapau' rojak mamak and mee rebus perked us up. But for two over 60s, it had been a long day. We did not get back to Jai's abode until after midnight. Tut tut - terrible behaviour for two incorrigible pensioners.
Posted by anak si-hamid at Tuesday, June 29, 2010

Boon Lay Shopping Centre, how can one not visit this place if one grow up in the Jurong Area? After the cemetary, its straight to BLSC for makan and shopping!
How was the Asam Pedas, did you have an extra serve on my behalf?

Look like you two have a good time..
enjoying food, visiting and light entertainments. It seems that the over 60s pensioners do not need too much beauty sleep, non?..
Ah, good morning towel.. my spouse normally keep dozens of them in the house...
Take care.

Thank you Roy,
Do you still remember BLSC? As for the asam pedas I grade it 8 out of 10. You know nobody gets more than 7 from me.

Wan Sharif,
That's why we look shattered. Not enough beauty sleep.
The more I hear of your good wife, the more I approve - morning towels and all.
Thank you

Thank you AsH for being so generous with your grading.

i hope both of you are not shattered after the Full Monty. Mmmmm Adrian Pang...

ph,
Will you behave yourself? Adrian Pang is just another man ...really!!!