A Visitor from London

One day (yesterday), Yuwrajh came to Leicester to visit his former teacher Miss Hamid and her husband. As soon as he came into their house they almost collapsed and told him to please go home. But Y's training as a nurse helped him to cope with the two diddies who were in a state of near-shock. First, he made the coffee. 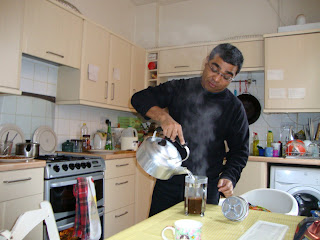 Next, he was told to lay the food on the table.  Miss Hamid, the old dear, forgot that Y was not the 16 year old she used to clip around the ear. 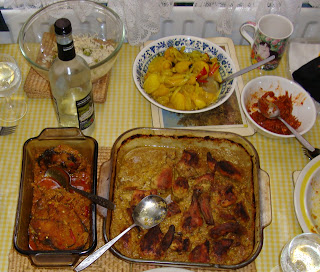 . This was the spread which secretly delighted Y's heart, no....stomach.

Finally Y could sit down to enjoy the meal. He was forced to smile for this photo - again it's that bossy teacher. 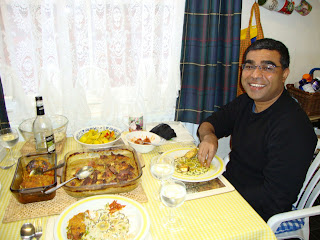 Her long-suffering spouse also suffered the same abuse. He was only allowed to eat the salad. 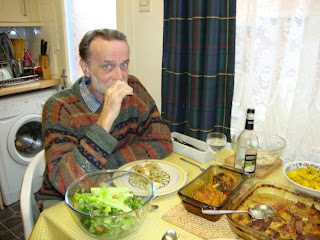 Poor spouse. By now, the cruel Teech was almost under the table - too much elderflower drink.

They then adjourned to the sitting room. Y was not allowed to sit on the comfy settee in case, like Teech's husband, he spills his drink onto the cushion. Men tend to do that - just to annoy the women.
But why is Y looking distressed? 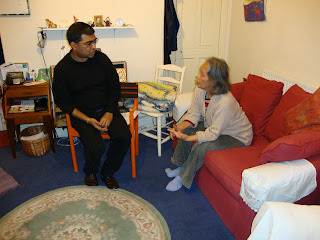 He had just been told that the Pineapple Pachri costs £3.75, the Spicy Chicken £6.50 and the Fish Acar was £6. Well there's no such thing as a free lunch says Miss Hamid. Your menginding (moocher) days are over!


But, they did come to an amicable agreement. 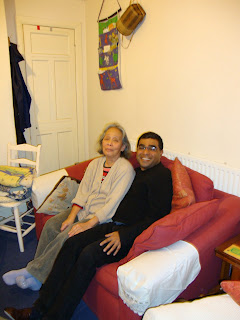 Teech decided to give Y a 10% discount because he had brought with him gifts of 3 types of yummy biscuits, 6 avocados and a bottle of ginger and lemon grass drink all of which were not to be opened and shared because Teech's husband is a (sort of) Scotsman.


Yuwrajh had to catch the 18.55 train to London. So he put together his cute bike to cycle to the Railway Station. 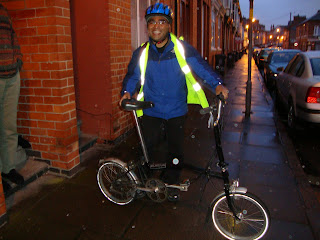 I hope the other boys and girls from Y's schooldays will take up the same healthy habit instead of stuffing their faces full of food and melepak-ing (lazing about) in Rukhsana's house.

So everybody say good-bye to Yuwrajh. "Goodbye Yuwrajh." Have a safe journey home. 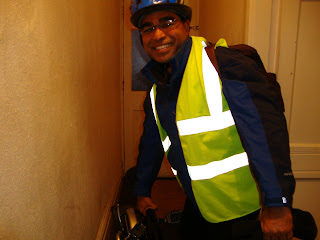 Thank you dear Yuwrajh for taking the trouble to come all the way from London just to see us. It's been such a long, long time. And your visit has brought us so much joy. Take care, especially when cycling in London.
Posted by anak si-hamid at Sunday, March 21, 2010

Goodbye Yuwrajh. You should have told me that you were going to Leicester and I'd tag along.

Ms Hamid, nice to have a chance to be teechie again. I am surprised you didnt make him (and Iain) stand in the corner or do the tok ketampi.

sunnysideup,
Doesn't Yuwrajah still have that same (young) smile?
He asked about you and Shah, remembering the latter as the cheeky rascal.
Aah, where did all that time go?

Kak Teh,
Tch, tch. I can't torture them any more. They both have back problems. Who's going to do the washing up if they collapse?
It's an entirely different matter if you were here. Then I could look for the rotan.

Remember Jim Croce's 'If I save time in a bottle ' ?

sunnysideup,
Yes I do and also Jim Croce's "I have to say I love you in a song" - Ben's favourite song for his heartthrob.

My dear AsH, Yuwrajh wouldn't be smiling too much if Bek was there.

Yuwrajh, if you're reading this, please note that Boh Peng (Bek) is very upset with you. Each time we mentioned your name, she would go,
!&%$%$# - that's how upset she is with you..

Yuwrajh made Roy a facebook friend but not me. I will not forget this easily.
BoPeng Soh

Dear Bopeng Soh and ph,
Whay do I get that funny, familiar feeling, a sense of deja vu?

You're at each other's throats again - just like old times.

I shall make Yuwrajh write a hundred lines. Bad Boy!! And ph will have to sit in the corner for being a 'batu api', for fanning the flames instead of being a 'mediator' like the Americans and Brits on peace in the Middle East. Next time I see Yuwrajh I will make him sit under the dining table instead, and feed him only bread and water. Bek can have the largest slice of my carrot cake -there, there.


And now, get lost, the lot of you and leave me in peace.

(Roy, get back to Perth quick before the fireworks start. You're another troublemaker.)

What do you mean .....Miss Hamid.
Oh kasihan...to BoPeng Soh. Guess I shouldnt have open my mouth abt FB. Anyhow, Y looks sehat and kacak though he still look abit boy....ish to me

Roy,
Hope you got over your wild times with your mates. Yes, Yuwrajh will be over the moon to read your comments about him.

And thank heavens you're out there in Perth -otherwise my stomach will have another headache.