Revisiting the Conflict that the West Always Ignores

"Russia has never seen terror like this", says Jon Snow on Channel 4's 7 o'clock news tonight. He was referring to the double suicide bombings which killed 38 in Moscow.

What short and selective memories the western media have!!

Russia waged two wars on Chechnya. The first was from 1994-1996 when Chechnya declared full independence in 1993. Under Yeltsin the Chechen capital Grozny suffered massive aerial and artillery bombardment throughout the winter of 1994. It was estimated that the Russians carried out up to 4,000 detonations an hour. Grozny was levelled, turned to rubble. 25,000 civilians and 1,500 Russian soldiers (just 6% of the number of Chechen civilian deaths) were killed by April 95.

In 1999, Putin attacked Chechnya again - supposedly a war against terrorism - but it was mainly to reverse the defeat of 1996 and a ploy for the coming Presidential election. Both sides have been crunching numbers about the casualties they inflicted or suffered. But there was no question about the 200,000 displaced Chechen civilians in that war. They were stopped from fleeing the fighting when Russians closed the Chechnya-Ingushetia border.

This is an extract from Lindsey Hilsum's report in the New Statesman of 26 January, 2004.

"In Chechnya, human rights abuses and war crimes are not aberrations but tactics, an integral part of a war that, .....has killed or driven into exile nearly half of the Chechen population. Atrocities carried out by Russian troops and their proxies are well documented, but attract almost no censure from European or American governments because Putin's war in Chechnya is deemed to be part of the war on terror".

Compare this to the succour and support given to the East Timorese to the point where there now exists the independent state of East Timor, freed from the shackles of Indonesia. And what about the European and American outrage at the plight of Aung San Suu Kyi at the hands of the Burmese Generals?

According to Hilsum there now exists a 'terrorist group', the "black widows" . It seemed they "have carried out a series of bomb attacks in Russia and were behind the 2002 Moscow theatre siege. They are the widows, mothers and sisters of Chechen men, mainly Islamists, who have been killed by the Russians......One thing that Chechnya isn't short of is widows. The Russian response, according to the International Helsinki Federation, has been a 'growing number of crimes targeted at women', including disappearances".

The two suicide bombers who blew up the Moscow subway were women. In all probability they were two 'black widows'. If this had taken place during the Second World War and the suicide bombers were two English women, they would be regarded as heroines and martyrs. UK would have built some kind of monument to their bravery.

As for the Chechen women, they are branded as terrorists. 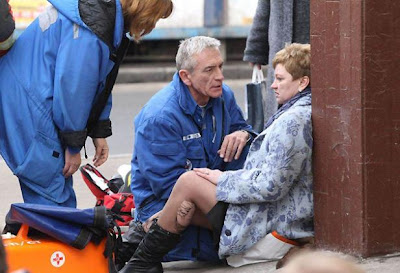 showing medics helping an injured woman outside the Park Kulturi metro station in Moscow (Picture by Vladimir Fedorenko/AFP/getty Images), the world will stop for a second and think of this image 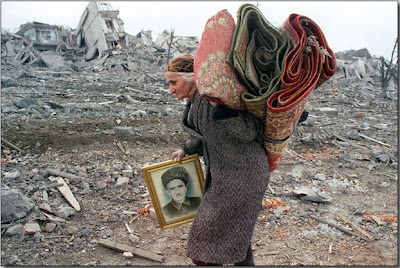 of a Chechen woman carrying rugs and a framed portrait through the destroyed streets of Grozny, the capital of Chechnya, in 2000.

Do remember that while today's bombings will fill the news and as the Western world is mired in their economic morass the Israelis are carrying on their ethnic cleansing in Gaza and East Jerusalem.
Posted by anak si-hamid at Monday, March 29, 2010

i love your sincerity in this post =) love it.

Thank you Ms Chaya,
I get upset and angry when I look at the pain suffered by the poor and powerless.
Western self-righteousness and hypocrisy hold sway over the world's perceptions of others different from them.
Or am I just imagining them? I've lived in the 'belly of the whale' for over one quarter of a century and so I think I'm not just being paranoid.
I'm glad you can sense the purpose of this posting. Thank you for the feedback.

I can understand the black widows' frustration, loss, anger - but then again, there were non ruskies on the train! truly innocent ppl who were stuck inbetween - wat were they thinking!?!
What they need, are more ppl like you who can penned down the hypocrisy that has been continously fed thru all mainstream media. Simply no answer to your points.
What can we give? Prayers, support, thought, boycott ..... no balls to sweat more than that :(

I sigh yet again whenever I read or listen to the inconsistencies of the west (or the powers that be) and how facts are distorted and words twisted and how people just see what they wish to see. More people should read this post!

Thank you Anonymous and Jooli,

I think our English Language Syllabus at Post-Secondary levels should include Critical Reading instead of just barking at print.

May Allah reward you for trying to right the wrong..the hypocrisy I mean

Thank you Wan Sharif for your kind thoughts.
I am like this because of my father's influence and my spouse's encouragement and push.
Or maybe it's just the che'gu in me.