He was an undergraduate at Wellington University sharing a flat with Mohammad, an Indian Muslim from Fiji. Mohammad introduced him to Hindi songs and even taught him how to make chicken curry.

She was also fed on a diet of Hindi songs by her mother who was addicted to Malay and Hindustani movies. Uncle Joe Nee (Tan Joe Nee), our Peranakan neighbour was the official advertiser for Hindi movies. He would yell to my mother from across the river, "Kak, 'tu cherita 'Janglee' bagus - lagu2 nya semua sedap. Pi tenguklah 'kak". ( Sis, You should see that movie 'Janglee' - very nice songs).

This he and she met in Leicester in 1981. She was on a 3-months' holiday-cum-study leave and decided to look up her former tutor from Singapore University days. He was a helpful tutor, quite sweet and kind but he certainly was no Dev Anand (my heart-throb) or Dilip Kumar or Raj Kapoor.

He showed her his collection of Hindi records - hundreds of them. Some men would take their lady visitors to a cinema or a meal in a restaurant. But this lucky woman got a real treat because he brought her to his favourite Hindi record shop where he would spend about an hour picking out his favourite album. He would leave the shop with about 3 or so albums tucked under his arm - looking as pleased as Punch - and the shopkeeper beaming with joy - you could see the £-sign in his eyes. 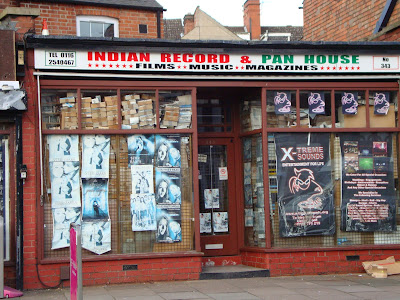 She tagged along because this was just a pit stop before she embarked on her great adventure - a solo driving holiday through Wales. Also he cooks beautiful chicken curry. One evening, for after-curry-dinner entertainment ( he only had a 10 inch black and white TV with a very unreliable indoor aerial), he put on a concert of his Hindi records. This was one of them.

You neither know me, Nor I know you.
But it seems I have got a friend (Rough translation) They don't write songs like these anymore!!

That was it!! She was completely beguiled and he was absolutely captivated because they discovered they were in love - with the same song. Dev met his Waheeda and vice-versa. The rest is history.

Now and then these two would get slightly loopy in the park, but especially in Spring. They would act out scenes from Hindi movies where the heroine is running from tree to tree to tease her hero.

If you're lucky, one of these Sundays, take a walk in Taman Tasik Titiwangsa and you might spot them acting out their dream life. 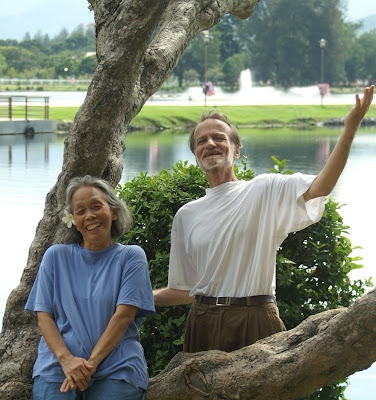 Errrr...do they change their clothes 2-3 times too in the course of a song?!!!

Thank you Naz,
I can see you're another addict.

Thank you Kamal Latif,
It's also a bright sunny Spring day outside - lovely..... hope you will have a fantastic day tomorrow.

What a romantic story. Maybe you should have an anthology of how the Mak Cik Bloggers met their love ones - it will make an interesting read. I love yours!

Jolly good idea. Must get the GOW organised again. Have a 'show and tell'.

mekyam,
Glad you liked it. Sometimes I get a bit loopy and this posting is the product. Old age makes you do stupid things.

ahhhhhh....I remember that musical in Taman TT. I believe the visitors there are waiting for an encore !

sunnysideup,
No way. No encore, No supply of tosay and teh tarik here, so we've lost our touch /voice.

My Dear AsH, for the encore we need to get some background dancers just like what we see in Hindi movies. What do you think ?

Dear ph,
If you and Oi Bek and Ruk want parts as dancers in our movie, you have to pay. The highest bidders win because it is a right real privilege.

hahaha ! these are the Buchanans that I love to bits!!!! Can you do an encore when we visit you?

Kak Teh,
We'll do a Hindustani encore if you and AG will play Saloma and P.Ramlee.
Make sure your young ones and mine are not armed with rotten tomatoes.

My husband thinks I am loony and loopy. But I love a good laugh.