A Report Book like this has been the bane of my life. 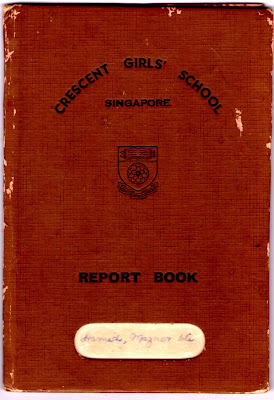 Note the way my name is recorded, - Hamid, Maznor bte.

[My father's name became the surname. When I came to England to study, the bank and the University indicated my name in exactly the same manner. They have problems with foreigners who have no surnames or family names. In fact they describe your name as a 'Christian' name! Also,as a Muslim you never tag on your husband's name - you keep your birth name and your status as your father's daughter.]

I enjoyed my time at Crescent Girls' School. I made many great friends and had a lot of fun during those years. In an all-girls' school you can be as uninhibited, as sloppy and mischievous as you like. You don't have to behave like a Miss Goody Two-Shoes. There's no need to look pretty and demure because there are no boys around to impress. Anyway it is not easy to look sweet when you're spotty. But who cares as we're all of the same ilk!!

We were introduced to a new subject - Domestic Science - when we started secondary school. It was merely old wine in a new bottle - which is actually just plain Sewing and Cooking.
During our first Cookery lesson we had to learn to make a hot beverage like tea and coffee. We were warned that if we spilled even a drop of milk (condensed) while doing this, we had to lick it off the table. Some of us did. Luckily I was saved that humiliation.

Next we had to light the oven to bake our first rock bun. Very, very few of us had even seen an oven, much less to use one. We were so scared of this D.S. teacher from Hell to the point where, in trying to co-ordinate the oven control and lighting the oven we burnt the fringe of our hair. I was one of them. I still remember the acrid smell of burning hair. This time we were not punished because Miss Tyrant feared the repercussion if we complained to our parents.

One day, Molly Quek, the lovable tomboy in our class who lived at 6 MS (milestone) Pasir Panjang Road, devised a plan to puncture 2 of Miss Evil's tyres. We lent her our blessings and connivance. After school was over, we watched with glee as Miss Nasty spluttered and screamed with anger when she discovered the state of her tyres. Aaaah, that was sweet revenge.
They could not find the culprits - not a peep from anybody. Anyway, by today, we are protected by the Statute of Limitation and I shall never squeal on my comrades and neither will Molly. By the way our tomboy was the first one to get married when we finished secondary school. I bet she is now surrounded by 4-5 grown-up children and 20 grandchildren.
Hip, hip, hurray for Molly Quek.!!!

The upshot of this tale was - I got thrown out of Domestic Science classes. I remained happily undomesticated and slightly wild. I was so happy to be a dropout that I shall now publicise my miscreant credentials.
Hip, hip, hurray for Maznoor Hamid!!! 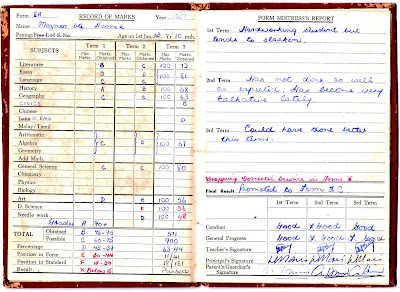 It was tough trying to explain the two red marks to Abah but he was not a tyrannical dad. I managed to convince him that I was 'promoted' and not 'transferred' and that was not bad, despite the colourful bits in my Report Card. As for the Form Mistress's Reports, I got hell!

This is the photograph of the school leavers of 1961. Molly and AsH are in there somewhere. 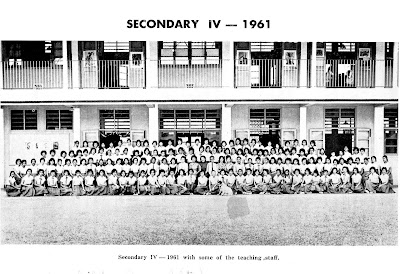 Cooking to me is more of an art, not really a domestic science. That is why men have cornered the market for haute cuisine. With time I learned to love cooking. My only concession to it being a science is because I like experimenting with new recipes. I was told by the spouse that the first chapati I made could be used as a tool for wall-demolition.
Posted by anak si-hamid at Wednesday, March 24, 2010

They taught rock buns in '60's. I had to make rock buns (form 1) in '76. I quite enjoyed DHS (anything but math) I must say.
I cook everyday, being easily tired of the fare they serve in the eating places. My staple would usually be the all-in-one: noodle soup/ nasi goreng tak pedas/ spaghetti and the like. When I got married, however, I had to make curries, rendang and masak asam pedas, among others, under the tutelage of my hubby, who, according to him, has never even boiled rice.(I actually believe he was an expert chef in his previous life). But he's quite accommodating, motivating me with comments like: another fifty times of making this, I'm sure you'll be excellent. Or: nice enough; but it would be better with more lengkuas. Sometimes I wonder whether my cooking is better these days, or if hubby has got used to my cooking.

Oh Jooli,
I do emphatise with you. They (spouses) do that because they want to keep you on your toes and keep the standard (of the food they consume) high.
But your repertoire makes me drool. Your hubby doesn't know how lucky he is. Typical!!

i will give you an A+ for all those meals you had cooked for me, they're really shiok !

Well they got that wrong didn't they? You bloomed from those low marks to a great cook and needlewoman. Well done, 100% !

ph,
You will eat any rubbish I cook. So you are not the right person to give me an A.

Thanks Bride for the bouquet.
Come to think of it - if I had dropped out of Science I would be a brain surgeon today. Think of all the so-called brains I could repair, starting with some relatives eh?

You promised us vegetarian haggis but you haven't delivered. I think that's another red mark in your report book.

I too had a Quek early in life. I was leaving Paddington station on a trek halfway around the world. The degree was done and life was at a loose end. Armed with a map of the entire North Africa and Asia up to Afghanistan, I bade my friends farewell. And a guy named Foster Quek {from Singapore}gave me a pair of red socks just in case I met up with the Pope.

Whatever next will you pull out? The Ark of Covenant?

AG,
You've been in this country too long and picked up some bad native habits. Whinge, whinge whinge!!

As for the haggis, the resident Scotsman could not find the seeds of the haggis plant so you just have to wait until David Attenborough discovers it in some remote jungle in the Fairways.

Red socks and the Pope? - sounds like a really funky pop group. The Pontiff really needs some Good News with all these raunchy expose of the goings on in the Catholic Church. They should have spent their energy and devotion on protecting their children instead of slagging off Islam as a violent religion AND hankering for the word 'Allah'.

Well, you just have to "wait for the next exciting episodes". It's good therapy for a grouchy geriatric who lives with a scotsman who's still searching for his roots (of the haggis tree).

Lang may your lum reek. It's a line my dad's Scottish friend wrote in my autograph. Translate this any way you like.

(Guest commentator)
Dear AG,
I once tried 'budu' (from your northern neighbours). Give me haggis anytime. And I wish my dear wife would stop pulling everyone's leg about haggis being a plant. Any good Scot takes a few days off for the Annual Haggis Hunt (in late November, when they are quite plump and lemak - as you probably know). You also probably know that the haggis, being a mountain animal (and used to running around steep hillsides) has much shorter legs on one side than on the other - the left side in Scotland, the right for animals bred in Australia. But then most people probably don't know that.

I took a wok once and fried some keropok. And then made some ikang singgang, the easiest East Coast dish in a belanga. That's my short life as Jimmy Oliver (without the lisp).

Yes, I shall wait for the next exciting episode with bated breath.

I was sitting under a spaghetti tree when I saw a haggis walk, two short legs in the rear, two lang ones in the fore. Could have been the South Pole haggis, prized by the Inuit for their blubber. Imagine, they have no television in the igloo, and the Southern Haggis would sit on its short hinds and mutter all day and night long, "Blubber, blubber, blubber..." Keeps the Inuit children occupied (in mind and igloo).

dear AG,
The species of Haggis you refer to (Haggis Verticalis) became extinct in the 19th century - the Haggis Horizontalis survived because it was adapted to grazing around hillsides, on a level altitude, rather than trying to climb to poorer pastures nearer the summit. This is the reason why surviving Haggis have shorter legs on one side (as I said) rather than shorter legs at the front. The species Verticalis (despite its evolved shorter front legs), died out because the highland summit vegetation was too thin.

As for the Antarctic Inuit you refer to, there is still quite a debate raging. Some say that the group came from a migratory voyage that went astray during the 18th century - a dozen kayaks got lost, drifted over the Equator, replenished stores somewhere near Santiago and eventually settled near Mount Erebus. I think it is more likely they were part of the Canadian Antarctic Expedition of 1921.
Dick Dimble.