WHY OH WHY MALAYSIA???

CHECK this for the rest of the blood-curdling news.

Why is a small pond like my Tanah Air nurturing and feeding these domestic and foreign piranhas? On my blog (Xmas Day 2009 and 31 December 2009), I've written enough on TB, this grubby little huckster - and his oiks. I've run out of words and so these images will do a better job.
Please click on the images for a clearer read. 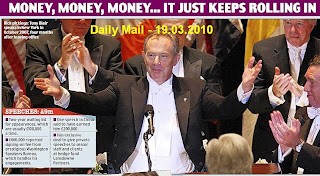 According to The Daily Mail : "Tony Blair waged an exhausting two-year battle to keep secret a lucrative deal with a multinational giant which has extensive interests in Iraq ...... that he is cashing in on his contacts from the controversial Iraq War ...... that Mr Blair is using his role as the West's Middle East envoy for personal gain."


By the way, who are these Malaysian and Singaporean "Caressers of Tony Blair"?

"The conferences are organised by Success Resources, whose chief executive, Richard Tan, said: "Tony Blair is respected as a great leader, a great visionary and a man with significant purpose in his life."

That's it folks. I now have to disinfect my hands and wash out my mouth with soap and water so that I will feel clean enough to carry on with my other postings.
Posted by anak si-hamid at Monday, March 22, 2010

The biggest crook comes alive again ! At least his partner that Malbush is quiet, but its never enough for him !

sunnysideup,
They all like the taste ....of MONEY.
Now that western democracy of Great Britain should stop pointing fingers at corruption in the Third World - but will they? They can swear and declare that yellow is white.

One wants money, the other wants name and even more money.

as my word veri says: voila!

Thank you Naz,
Only yesterday 3 ex-Cabinet Ministers were caught courting for cushy Consultancy jobs for £3000 - £5,000 per day! They must be trying to follow the footsteps of their former Great Leader Tony Blair.
And yet they're always pointing fingers and denigrating corruption in the non-western countries. It's the hypocrisy and double standards that irk me and which I want to expose. My Tit fot Tat.

Wah lau.. i no understand how can people be so bodoh one ah - pay money to listen to a bloody crook ??!!

It's because they have no principles and they only worship the MONEY-GOD.
Only wished they had chosen the MONKEY-GOD.

We can do our little part to keep this criminal out of our Tanah Air by signing here.

The only place he should be allowed, nay kicked, into is a dungeon. Or Guantanamo.