My nephew asked me to write on Gaza, because right now they're being brutally savaged by superior Israeli firepower while the rest of the freedom-loving, free nations of the world look on and meekly request for 'restraints' from the terrorist state of Israel.

I have been a spectator to this decimation of a people and a nation by fellow-followers of the Book, by a very old, very talented, and very cultured people who make up 0.002 % of the world's population, but whose " political influence in the US ranges from the Anti-Defamation League to the United Jewish Appeal, to the New York Times, to the .......Jewish caucus in the House of Representatives " (J. J. Goldberg 'Jewish Power', 1996).

I have witnessed this carnage of a sovereign people on the British print and electronic media since 1984 and it has got me so incensed that I cannot bear to watch or listen to anymore. This anger and frustration is like a dagger that cuts you from within and I do realise that anger is self -defeating.

But I have 3 posters here from the Leicester-based Friends of Al Aqsa and they remind and help me to remember who are the other victims of the HOLOCAUST. 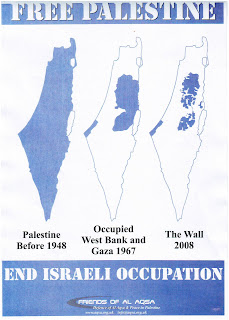 This map speaks volumes as to how much has been taken from the Palestinians while the rest of the world looks askance.
Israel's founding - the last colonial power on earth - is a testament to the historical transformation of the passive persecuted Jew to the most powerful political nation on earth. A nation that silences and intimidates through the stick of American power, its own military and intelligence might, Jewish money, media manipulation, movies, and above all its own myths and lies. No nation has successfully withstood international laws and condemnation and told the world to go to hell.
Mohamed Khodr, contributor to Media Monitors Network 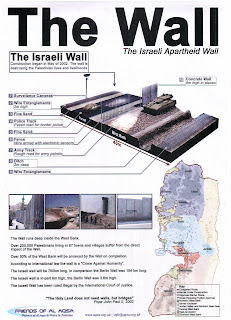 Alexander Cockburn wrote in Counterpunch 2006, The years roll by and Israel does its successful best to destroy all possibility of a viable two-state solution. It builds illegal settlements. It chops up Palestine with Jews-only roads. It collars all the water. It cordons off Jerusalem. It steals even more land bisecting Palestinian territory with its "fence". That is The Wall. 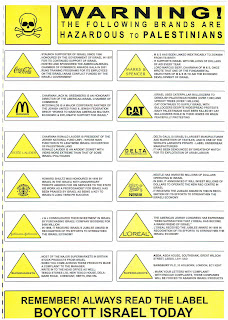 The tragedy is not the brutality of evil but the silence of the good people.
Martin Luther King Jr. Make what you will of the connection between the List above and this quotation.

Years ago after another brutal attack on Gaza, I watched on the British TV screen a Palestinian mother mourning the death of her son at the hands of Israel's cowardly military forces defiantly crying out " I have 5 more sons".

Gaza bleeds and so should we.

Salam Maal Hijrah 1430.
I was alerted of your blog by Rocky Bru and found it very stimulating.
"Why?" That's a very difficult question to answer, isn't it?
And if I may add:
Why can't Abas and Fatah accept Hamas as the Palestinians' choice and support them?
Why did it take the Arab League FOUR days to hold an EMERGENCY meeting that came up with a simplistic solution of (duh!) getting Fatah and Hamas to agree?
Why does the OIC have to wait til Saturday to hold an EMERGENCY summit?
Why did Mubarak agree to the blockade?
Why? The questions never cease, but the answers are not forthcoming.

Like those who wish to see an end to this atrocity(& drama),& as one who doesn't believe in violence, I do have second thoughts about Osama's approach.

How many more life, and meetings, and demonstrations, and memorandum do we need to wait till we see an end to this?

You can cut a deal with human, but not with beast who kill children & innocent people without any guilt...

And why is our home grown Friend of America champion maintaining a deafening silence? You got no balls huh, Anwar Ibrahim?

You know what ? You dun know how right you are ! He HAS no balls !. He's probably busy asking his American bomoh boss for the next date so that he could announce his taking over of the country !

Nway dun see much of his 'religous' public image anymore ! Wonder why ! His supporter use to harp on that when they compared him to Tun M. Imagine that ! Comparing anwar to Mahathir !

Anwar may fool the american to make them believe that the malaysian would suppotrt him -- but the people of Malaysia are not that gullible !

The Pa;estines ? Again he's got to ask his american boss for the press text .

i believe justin raimondo of antiwar.com may have provided the answer.

let me quote a snippet here: "Because Israel is almost entirely dependent on international support – and especially American support – for its very survival, without U.S. public opinion behind it the Jewish state would soon wither on the vine. What this means, in practice, is that a constant stream of pro-Israel propaganda must be directed at the American people in order to justify the high levels of financial and military aid that keep Israel afloat. What's more, the Israelis must constantly generate the urgency and immediacy of the need to support their country. They have succeeded in doing this by projecting a sense of continuing crisis. The idea that Israel is in danger, that unless we ship billions more in taxpayer dollars the Israeli state will sink beneath the waves of an unrelenting Arab assault, is constantly being pushed – and we wonder why the "peace process" is perpetually stalled.

Given the need for a constant crisis, all efforts to mediate a peaceful settlement of the Palestinian question are doomed to utter failure. The Israelis simply have no interest in peace, when war suits their purposes so well. Indeed, when things get too peaceful, they have every interest in stirring things up. Once more, Israel is supposedly fighting for its life – so please keep those aid packages coming, to the tune of over $3 billion per year!".

the whole article can be read here:
http://antiwar.com/justin/?articleid=13978

I salute you !
Have borrowed some of your writings into my blog for the record.
Thanks and do put in writing more !

Ishish ada pulak orang ambil kesempatan berkempen untuk P.36. Let's not blame others but ourselves. It took the jews thousands of years and relentless efforts (& very clever scheming)to get to where they are now....

Talking about balls...what good can a thousand balls do when you have no "teeth"...

What everyone is asking, or atleast, should be asking is what can we do that may have some effect in terms of, if not stopping, then atleast interrupting this massacre? I have yet to find anyone who can answer this question in a sensible and pragmatic way. This is not to say that we should stop doing whatever little we may be doing, such as writing, organizing, and so and so foth, but to ask the unpleasant but neccesary question that needs to be asked, if we hope to leave this earth with a clean conscience. What can we, as powerless citizens of the world, subjects (however unwilling) of the Empire, in this age of imperial hegemony, do to right this wrong? We have seen how ineffective mass protests, and rallies have been in the recent past. We have seen how the (so called) democratic governments so casually ignored and keeps ignoring not only world opinion, but their own citizens, by the scores of thousands. The voices of millions of people, taxpayers and voters, were but discarded and disregarded in the decision making process when it came to Iraq in spite of what were by far the largest mass demonstrations and protests in history. We can't ignore the question just because we may not have the answer. I encourage everyone to think and at the same time continue doing whatever they are doing. I am not such a pessimist to say that our conventional actions and means of dissent is of no question. Indeed, it would be folly to say such a thing. Afterall, goodness knows, how much worse the situation would be were it not for whatever little resistance there is. It is just that we shouldn't resign to minimality. Most importantly, we shouldn't stop asking the questions that need to be asked.

"Gaza bleeds and so should we."

I am also compelled to add that we should be, all of us, constantly aware of the danger of becoming immune, of becoming innure to horror and suffering. If history teaches us anything, it shows us that we as a species have a very short term meomory and we tend to make ourselves comfortable in highly uncomfortable situations. We must not, as sister Anak said, stop bleeding.

Correction: I am not such a pessimist to say that our conventional actions and means of dissent is of no consequence. (not 'question")

hello cikgu, can you please write on whether it's safe to have a violent organisation, like hamas, as the ruling party of a neighbouring country?? I think I'm missing on a few details. Because I feel Israel is right to bring the war onto the strip after all that is happening with the muslim-branded rockets being fired randomly into their zionist land. If Hamas cared about their people, they wouldn't even think about throwing a rock over the wall anymore.