Brendan O'Neill from Spiked (www. spiked-online.com , 14 January 2009 'Israel, Starbucks and the new irrationalism' ) was very upset at the scene of the gutted Starbucks coffee shop on Kensington High Street during the London demonstration of January 10 against the war in Gaza. He wrote about " hardcore anti-Israel protesters", of how " Starbucks was completely destroyed: metal railings were thrown through its windows; fittings were ripped out; coffee machines were smashed to pieces. A special fury was visited upon this little shop."

This makes rich material for another Steven Spielberg Hollywood blockbuster. I hope they will remember to pepper it with lots of Allahu Akbars.

Then O'Neill went on to the "allegation" of Starbucks's links with Israel. He pinned it down to a letter dated 11.7.2006 by Starbucks's CEO Howard Schultz. 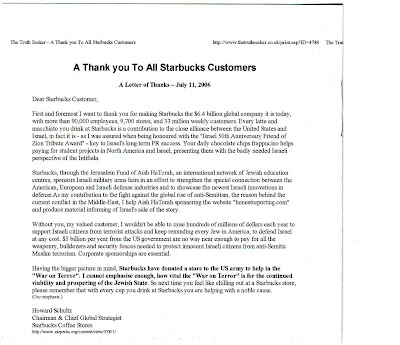 He then exposed the letter as a hoax ( like the Protocols of the Elders of Zion) by Andrew Winkler, an anti-Zionist activist of German origin. Note the word 'German', it's sufficient to damn Winkler as a critic of Israel. Remember, Hitler was a German - so all Germans are potentially and naturally anti-Semitic. The same label can be applied to Muslims who are also naturally Jihadists, Islamists and therefore bloodthirsty extremists. But you cannot condemn the brutality of Israel. That makes you anti-Semitic too.

Dear Reader,
The Howard Schultz spoof letter has caused quite a bit of a stir. We had over 10,000 visitors reading this article in the past 24 hours. Some of them were not quite sure whether the article was 'kosher' or not. Well, it was and it wasn't. Howard Schultz never wrote that letter, I did. If you didn't find it funny, blame it on my German humour. However, all the statements I made in that letter about donations, sponsorships, political views etc - are based on factual Howard Schultz actions and quotes, as 1/2 hour of 'Googling' will easily confirm to anyone interested.

O'Neill conveniently omits the last sentence of Winkler's update and claims that from "a miniscule seed of fact" Schultz and Starbucks have been demonized. He calls this 'cultural anti-semitism'. How does the mere purchase of a cup of coffee become elevated to a cultural symbol? Whose culture is he thinking about?

1. The CEO of Starbucks is an active Zionist . He was honoured by the Jerusalem Fund of Aish Ha Torah, which amongst other "good works" sponsors Israeli military fairs, and publicity (propaganda?) material for Israel.
One video produced by Rabbi Klein Spiro titled " The Islamic Connection to Jerusalem" .....
belittles Jerusalem's Islamic heritage.
Another features "The Occupied Territories - A Primer " which describes theWest Bank and Gaza as 'disputed territory' and not 'Occupied' land.


2. Gideon Meir, the official in charge of the Israeli Foreign Ministry's PR effort has this to say. "... The key to Israel's long-term PR success.... is on the campuses of North America and Europe. Wealthy Jews like Howard Schultz the owner of the Starbucks chain, are helping with student projects .....in which students hear Israeli presentations on the crisis."

There are more 'findings' to look at in the given website - they speak for themselves.

When you scour the papers and the net for views about boycotts and sanctions against Israel and the USA you encounter opinions that range from the cynical: like "what difference will that make? It will hurt us more than it will hurt them." to the ludicrous which sounds like this. "Then boycott the internet, the music, the movies, all forms of western technology and see where that gets you!"

Let us play numbers now. Black coffee at Starbucks KL is priced at about $8RM. Cappucino is about $14RM and the price moves up according to the tastebuds of Coffee Aficionados.
Firstly a little lesson in numberings.

Of course not all of the 404 billion goes to Israel. Even if a paltry 1% is siphoned to Israel as part of the CEO's take, this is still a staggering sum of over 4 billion USD. This 4 billion is only the amount that 1/2 a billion pays out. There's still the rest of the world's consumers, the Others.

According to the World Report on Middle Eastern Affairs, the USA doles out an annual average of 3.5 billionUSD in direct aid to Israel. On top of this is 1.5 billion USD private funds from fellow Zionists and sympathisers which brings the total to 5 billion USD.

According to Brendan O'Neill a boycott of Starbucks is irrational, rumour-mongering, a return to old prejudices. Explain then the captivity and incarceration without trial of many, many innocent non-Semitic people at Guantanamo Bay. Justify the murders of chidren and women in Gaza.

All the world loves a hero , Hollywood style.

Actually Hitler is born an Austrian. Some quirk of History made him a "German".

To MRSM Kalae Chepo 66/73,
Thank you for that detail. There's always hope for 'non-natives ' to lead a country ..... to war(?).
The history of Germany's borders is very complicated - she has claimed parts of Austria and Poland and France and blood's been shed over such claims.
In fact the so-called First and Second World Wars are basically Europe's Tribal Wars which engulfed the rest of the world.