Remember how Nero played his fiddle while Rome burned? Now observe how the Western media 'tunes' the news as Gaza is awash with the blood of the innocents . 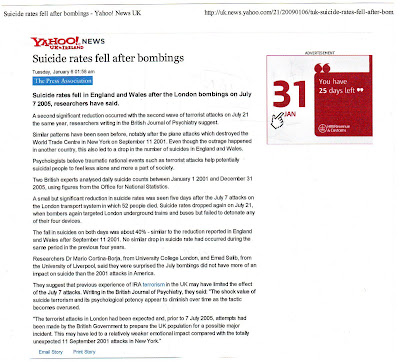 This is a convenient piece of news to put across while the terrorist state of Israel is pounding the Palestinians back to the Stone Age. Even though these academics are really trying hard to justify their salary by reporting on the positive face of suicide bombs ??? which in itself defies comprehension and relevance - the inclusion of this research as news is to remind the great British public that there's danger and threat out there from the Muslims. Remember July the 7th? Just like remember, remember the 4th of November when Guy Fawkes tried to blow up Parliament. 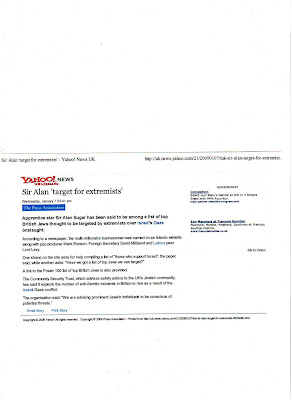 And now lo and behold, whose precious lives are now under threat? Rich and prominent British Jews have to be protected from nasty Muslims as a result of the Israeli - Gaza conflict. Conflict ?? Isn't that rich? Do you call the massacre of a barely armed tiny section of Palestine by a terrorist nation armed to the teeth merely a conflict?? What a tame word to use when this is a bloody war, of Goliath attacking David !

Dear, dear I hope the rich and prominent Jews in Britain and all over the world, barring Israel of course, will take precautions for their safety and lie low until the blood in Gaza has dried up and they can look forward to new settlements on what used to be Gaza and the Christian and Muslim Palestinians can go to hell.
Shalom

P.S. There's a problem with viewing the second Yahoo News. Please look at the next posting to read the full text. Thanks
Posted by anak si-hamid at Wednesday, January 07, 2009