Well Shah. you're off to foreign shores again. Now that your ole ma'ngah is a bona fide blogger I thought I'd write you a special posting - for cucu si Hamid.


You were born on the 2nd anniversary of my father's death and so you never knew him.
I reckon you and your grandfather were about the same age in these two photographs. 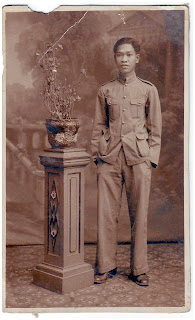 Written on the back of this photo is ' From A. Hamid, Health Inspector, Teluk Anson.
To A.R. Mahmood (our Ayah 'Long) , Port Swettenham.' 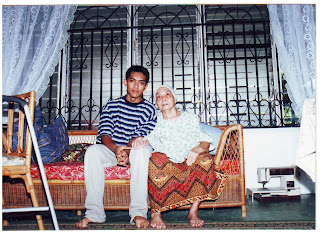 With your Tok Mok at Batu Pahat. She was very frail looking then.

1. You were a brave kid when on your first day at St John Church of England Primary School at Hull, during morning service you cried out "I can't say this, I'm a Muslim!". In her wisdom, your mother advised you to remain for morning service but read the Fatiha instead.

2. You were the rascal who, within 20 minutes, dismembered the watch that I got for you as a present. Just so you could try to put it back together which of course you couldn't ! You owe me a watch.

3. You were that weird kid who went around Boon Lay, raising your hand and calling " Ave" because you were so smitten with Asterix.

4. Also you delighted the Doctor with your cheeky retort - "Will this hurt?"- when she was about to give you an injection.

5. Who was that horrible pest who spent ages in the toilet making balls out of wet toilet paper and then chucking them at the ceiling, leaving stalactites which were noticed only after you'd gone home? You'll get the bill soon.

6. And there was that wicked young teenager who chased poor Dot all round the room just to catch a snap of her in her curlers. And all because you kept on losing to her playing Dominoes.

And so Dila, this is a brief potted history of the man you married. Cross my palm with silver and I'll tell you more.

And so Shah, have a safe journey, Anak Dagang di Negri Orang, Pandai-pandai menjaga diri. When your Abah left for his studies in Hull in 1980 (?) I gave him these lines from Jim Croce's I've got a Name.

"I've got a name. And I carry it with me like my Daddy did"

Thanks for the posting.

Yes, he was only 5 when he joined St John's and had in UK for only about 2 weeks.

Could I add one or two more :-

1) His mother was walking home from work behind our block. We were staying on the 22nd. floor then, and she saw few pieces of make-up stuffs like lipsticks and so on on the ground. She told herself that those looked familiar. On reaching home, she found out that Shah had been throwing them out of the window because he wanted to check whether those items could fly. Dont't have to tell who flew off the handle after that. Shah was only about 3 or 4 years old.

2. I was with Shah and a friend sitting on the grass near the bus-stop waiting for his mother to come home. I was smoking then and I had my packet of cigarettes on the grass. I was so busy talking to my friend that I didn't realise that Shah was chewing on the tobacco from my cigarettes. We were shocked --but Shah didn't seem to mind the taste. He was about 3-4 years old.

You mean that little boy Shah is now allowed to travel on his own, without mom and dad?

Time flies. I remember him around us back then. Many things seem fuzzy now; age, spirit and blogging do that to one's soul and his ability to recollect.

But I remember Mus the Smoker. Nobody smoked like Mus did. Tall, lean, angry and smokey -- that's what I thought of Mus.

Hi bro !
hahahah ! You remember too much la !

Yup ---time and age catching up with us old foggies. But hey ! I saw your photo with the sifu of rock ---and you still rock bro !

But you are definitely not the fair, shy, quiet guy that I knew back in Boon Lay then! You have thrown out all the adjectives that I remember you by.

hahaha! i dont have silver but will chocolates do the same? :D

i am still hvg jetlag, thus my being awake at 5 in the morning. and i will promptly sleep again at 8am later. sigh..

Wakey, wakey Dila. You're beginning to sound like Calvin.
Hobbes or your wacky spouse should drag you out of bed.

Take care and don't miss him too much. Absence makes the heart grow fonder.

Your weird Uncle Iain and Ma'ngah