Taboo or not to be.

For the Senior Cambridge Examination, Mrs Quah, - my very inspiring literature teacher -  instructed us to learn by heart, and to quote, various passages from Shakespeare's 'Hamlet'.   Here are the first four lines of one of them:

To be, or not to be, that is the question -
Whether 'tis Nobler in the mind to suffer
The Slings and Arrows of outrageous Fortune,
Or to take Arms against a Sea of troubles,

According to Wiki,  the American-Muslim human rights activist Malcolm X or Malik El-Shabazz (1925-1965) quoted the above lines at a debate in Oxford (1963) about "extremism in defence of liberty".

Growing up in a Malay kampung in Singapore throughout the 1950s, 1960s and 1970s,  we had a father who was worldly wise and street savvy about the world around him (and us).  He was fluent and knowledgeable in both his Malayness and the wider English language milieu that was present then in Singapore and in Malaya.  You would not describe him as "alim"  or  "warak".  His familiarity with  the Arabic language was limited to the ability to read the Quran.  He had  a Quran which also provided a Malay translation and when he was teaching us about 'Rukun Islam' and prayers he always wrote down the translation in English as well.  He wanted us to know the meaning and  the spirit of what we were reciting and doing.

I think  Akim and I were the most bolshie with our queries and I reckon we gave him a bit of a headache.  When Akim was in his early 20s  ( I was then 25),  I overheard him asking Abah:
"Abah, prove to me there's God."   Wow!!   I skedaddled away because this was really strong stuff coming from my very quiet and serious kid brother and I thought I'd better make myself scarce.  I regretted I did not hang around to hear my father's QED.  (QED is something you write when you have proven a theorem in Geometry).  It must have worked because Akim kept  his faith and I could see more strength and acceptance in him especially whenever he suffered his very frequent asthma attacks.

I saw a sea of mixed reactions: sheepish, resentful and approving.  AsH always seems to have this effect on people!!

In the midst of such an environment at work, I had to ask my Abah what's wrong with these Malays and Muslims?  Haven't they absorbed anything positive from their culture and their ugama?  He said, "There is nothing negative about our culture and ugama.  It all depends on the interpretation - on what we choose to select.  It's human nature to choose the easiest path and that choice is often based on irresponsibility.  Your choices can lead to good or bad and we are capable of both.  But remember in all your doings and thoughts you are only accountable to the One, to God.  There is no go-between, there is no excommunication in Islam - there's only you and God."

That advice abides with me from then till today and it has put me in good stead, guiding me through all my ups and downs

As Malays and Muslims -  though today the latter takes precedence - we are made aware of the various taboos, of the 'halal' and 'haram', of the 'dosa' and 'pahala',  from an early age.  These dichotomies seemed rational enough for us when we were growing up.  But today, I see my world being circumscribed and digitized by so many sets and sub-sets and binary applications of these rules that I might as well be living in a fishbowl instead of God's glorious and multi-faceted world.

As a consequence of these 'revelations'  and rulings I begin to wonder if  some aspects of my life would be deemed today as  'unacceptable' -  according to the interpretations of our clerics.

I have entered a Church, not once, but several times.  I have attended a Christmas Mass at Durham Cathedral with the spouse's Aunt Peggy in 1987.

When I was just 15, Mrs Darke. my Guide Captain came to our kampung house to ask my father's permission for me to attend a Thinking Day Service at St Andrew's Cathedral in Singapore.  Of course my father gave the green light - he did not have to sit me down to caution me about what I should or should not do while I was in the Cathedral.  He had faith in me and in the strength of my faith.  And Mrs Darke had no ulterior evangelistic motive! 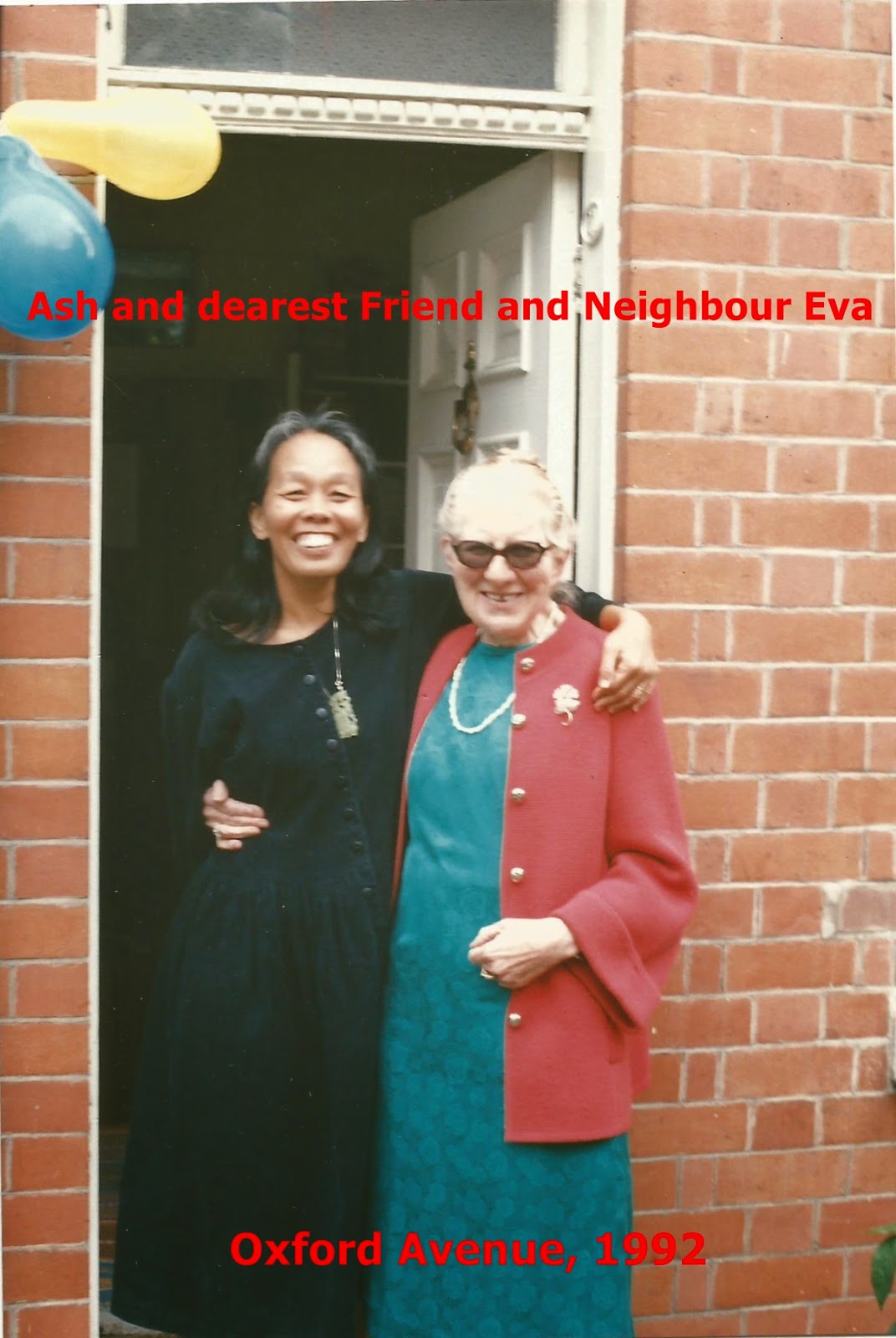 When our dear neighbour Eva passed away in 2003, Iain and I, and our neighbours Celia and Philip accompanied her in the funeral limousine as we were the only 'family' she had.   For nearly twenty years, Eva was like a mother to me - wise, sweet, and understanding.   Iain wrote the obituary for the Vicar to read during the funeral service in Church.  We chose a song she often played on her piano - we could hear her doing so because we were at No 10 and Eva was just next door at No 11.    And when "The Ash Grove" was played by the Church Organ my heart got stuck in my throat and the tears could not be held back. 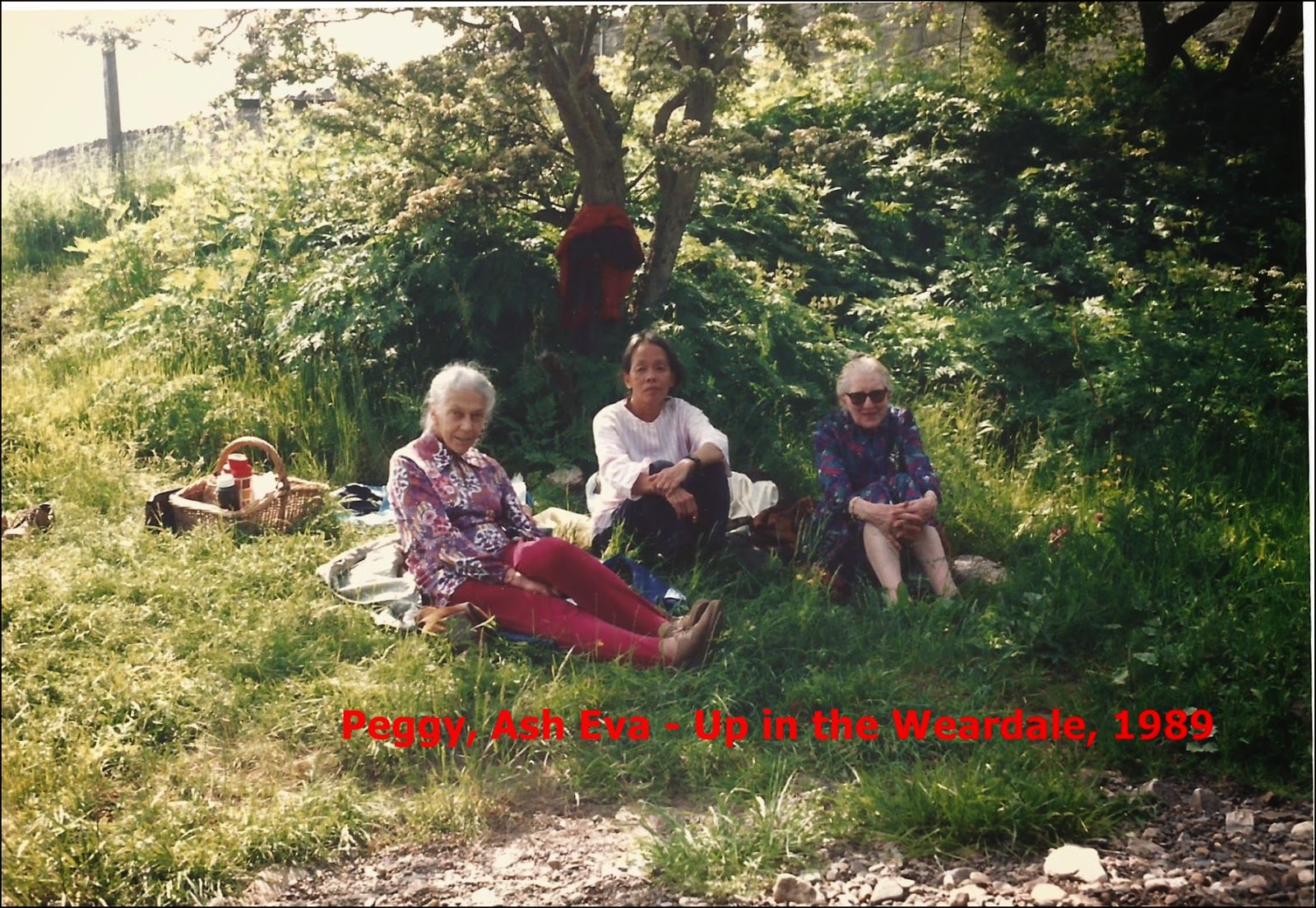 Peggy, the spouse's Aunt, was a regular churchgoer at St Anne's, Bishop Auckland.  She respected and loved animals enormously.  Once, she got fed up with the wife of the Bishop of Durham for shooting the magpies in the grounds of Bishop Auckland Castle.  So, very early one morning, she retrieved one of the magpies that had been shot by the lady of the house - and pinned it  on the front door of the Bishop's Castle!

Peggy, like the other Wicks sisters, had an indomitable spirit, creative and a strong sense of civic-mindedness and fair play.  At the height of the Salman Rushdie affair, she expressed to me that no one has the right to insult another religion in the name of freedom of speech.   Peggy did not have an easy life, she had no opportunity to travel far away from home but she was always fascinated about different worlds and different cultures.  So whenever we visited her, about 4-5 times a year, I made sure I cooked a Malay dinner, while Peggy cooked an English dessert,    I also made sure I left her a bottle-full of fried ikan bilis before we went home to Leicester  She could never get enough of it!   When she passed away in 2005, the Vicar had chosen her favourite hymn,  "All things bright and beautiful, the Lord God made them all".  And I joined in that hymn to celebrate the life and times of a loving and lovely lady. 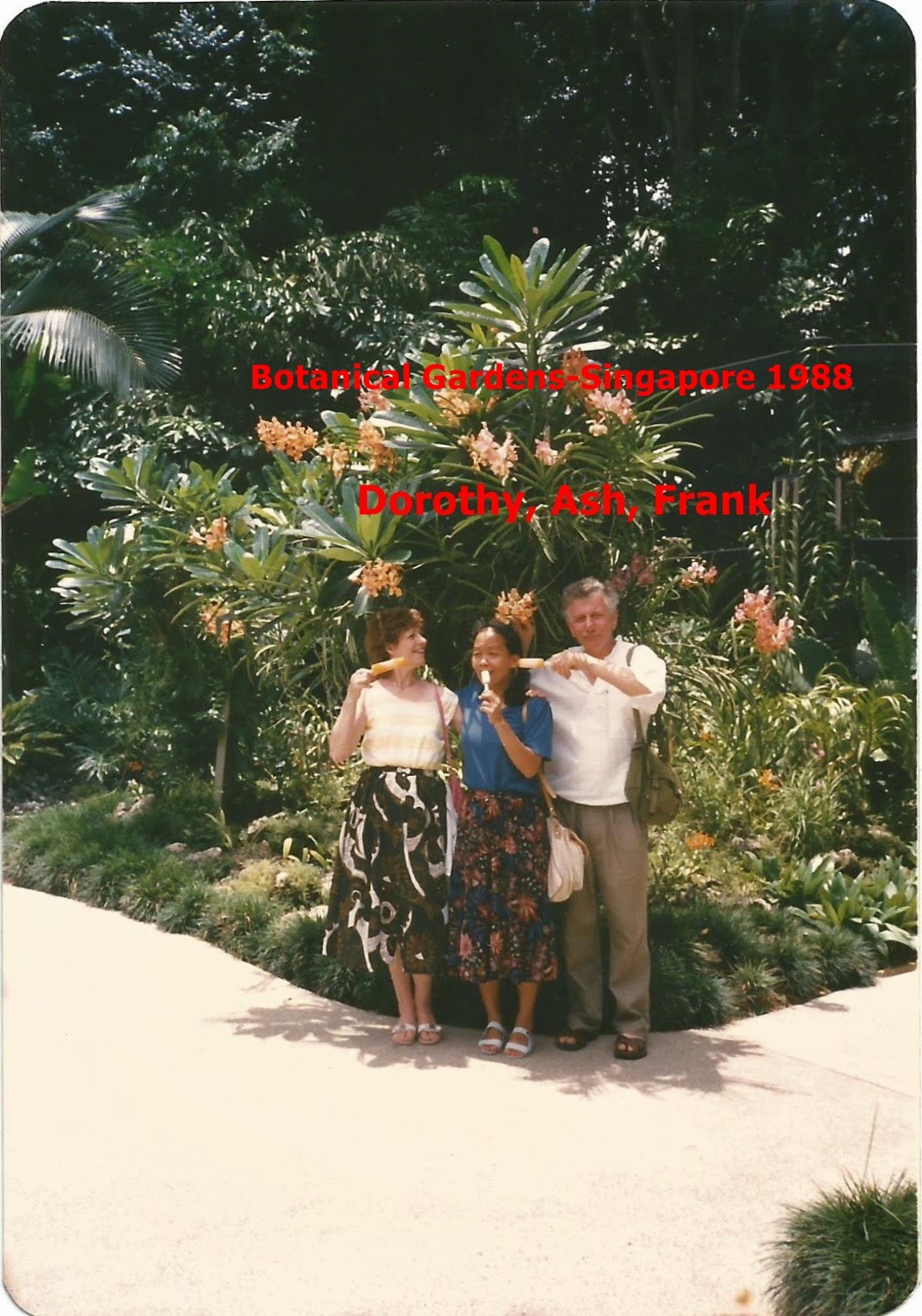 When I settled down in Leicester around 1985, Dorothy and Frank Moule became our dearest friends. Frank was a painter-decorator who left school at 14 and who, through sheer hard work and determination, went to University as a mature student when he was in his mid-40s, determined to be a teacher.    In his first year, Iain was his lecturer/tutor and Frank - who was ten years older than Iain - was his favourite student. During my first winter in Leicester, Frank and Dot bought me an electric blanket so that 'the little tropical flower' would not suffer too much in the cold.   Frank went on to  take his Masters, and even wrote an autobiography about his life as a painter and decorator, a union man, and a university student: I gave him his title - "Sitting on a Paint Tin".

We attended the service for Frank's funeral at the Unitarian Church in 2002.  It was a non-denominational Church and Iain wrote and read his celebration of the life of a good friend, an honourable man and a noble soul.  I asked Iain to add this, from and of Hamlet at the end of  his reading;  "Good-night sweet prince; And flights of angels sing thee to thy rest."

I sobbed my heart out for Frank and Dot and his three kids.  To the right of me, sitting by herself in the pew was another lady distraught with sorrow - it was Frank's estranged, older sister.

So there we are.   That's my admittance of the number of times I have attended Church.  It has not tainted my faith or diluted my commitment to Islam.  As for uttering Merry Christmas and enjoying Christmas trees, I have done that enough times, I think, to ensure me a place in hell - according to the instructions of  Malaysia's  clerics.

But I held firm to my Abah's words - " in whatever you do, you are accountable only to God".


Here is Frank's choice of the song (his personal hymn) to be played at his funeral service.

Ms ASH
Thank you for sharing. I am a kampong girl with similar experience of being in churches for weddings and funerals of friends.

i also went inside the St Paul Church in Chennai where it is believed the remains of the real St Paul is kept. It was just a curiosity on history.

I know Allah has credited me with pahala on each of those visits as he would do when I went to the mosques for similar occassions.

It is becoming a little suffocating in Malaysia now ... and I stand guided by what your father said ... it is between you and Allah.

Lovely to find a kindred spirit.

"The Ash Grove", a lovely song I learnt decades ago in my mission school, along with "Greensleeves" and "Loch Lomond". Then we had folk dancing, put up plays and musicals for Speech Day etc. Broadway movies, musicals and Shakespearian movies were regularly rented and shown to us girls. When I recount my schooldays to my nieces, they are so envious. Poor things. Haven't even heard of "My Fair Lady!"

Thank you for the comment and your memories. When I was teaching at Jurong Secondary School in the mid-1970s, the LDDS (Literary Debating and Dramatic Society) were doing the same.

I do wish that some of these school activities could be transmitted to Malay/Malaysian drama and literature.

Or maybe they have already done so? I would not like to see the younger generation turning into little wogs - like pseudo brits and yankees- ignorant and ashamed of their culture.