Seen below are a couple of my Malayan  (that is, pre-Malaysia) Christmas Cards from the same period.


And here's my own home made 2001 Christmas and New Year Card for my mates at the Leicester Royal Infirmary. 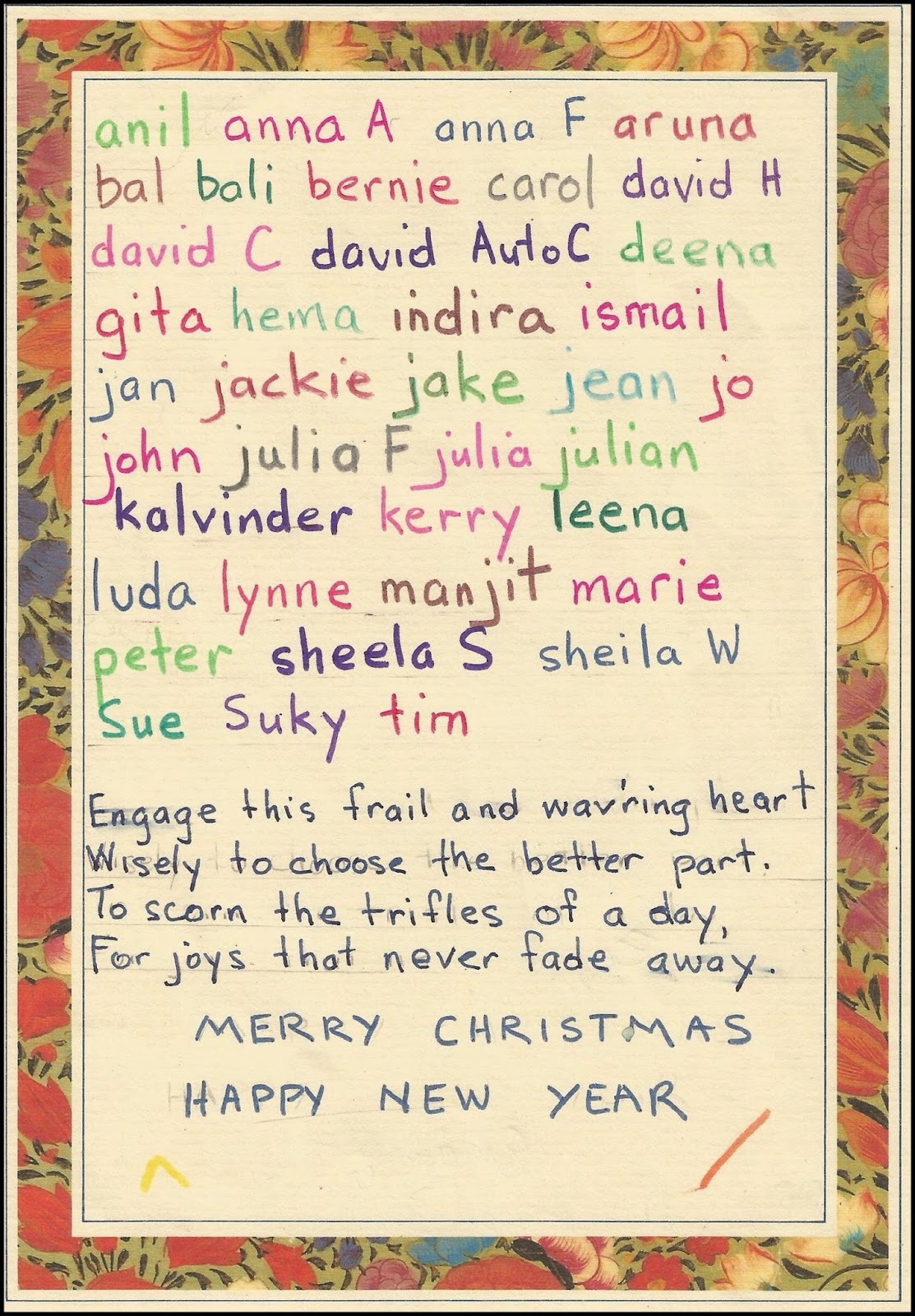 But all is not well in this 21st century.  Nothing is held sacred: everything is subject to use and abuse - anything goes as long as it serves some material, and usually self-serving, purpose.  We had a dose of it and maybe more during Hari Raya. Now it's the turn of Christmas - although the greedy shenanigans have gone on for far longer in the heart of Christmas Land .


A.    The Trouble with Christmas
(or: How Christmas is Politicized for Very Dubious Agendas).

It was in 2010 when we read this inane piece regarding the Red Cross and Christmas.. 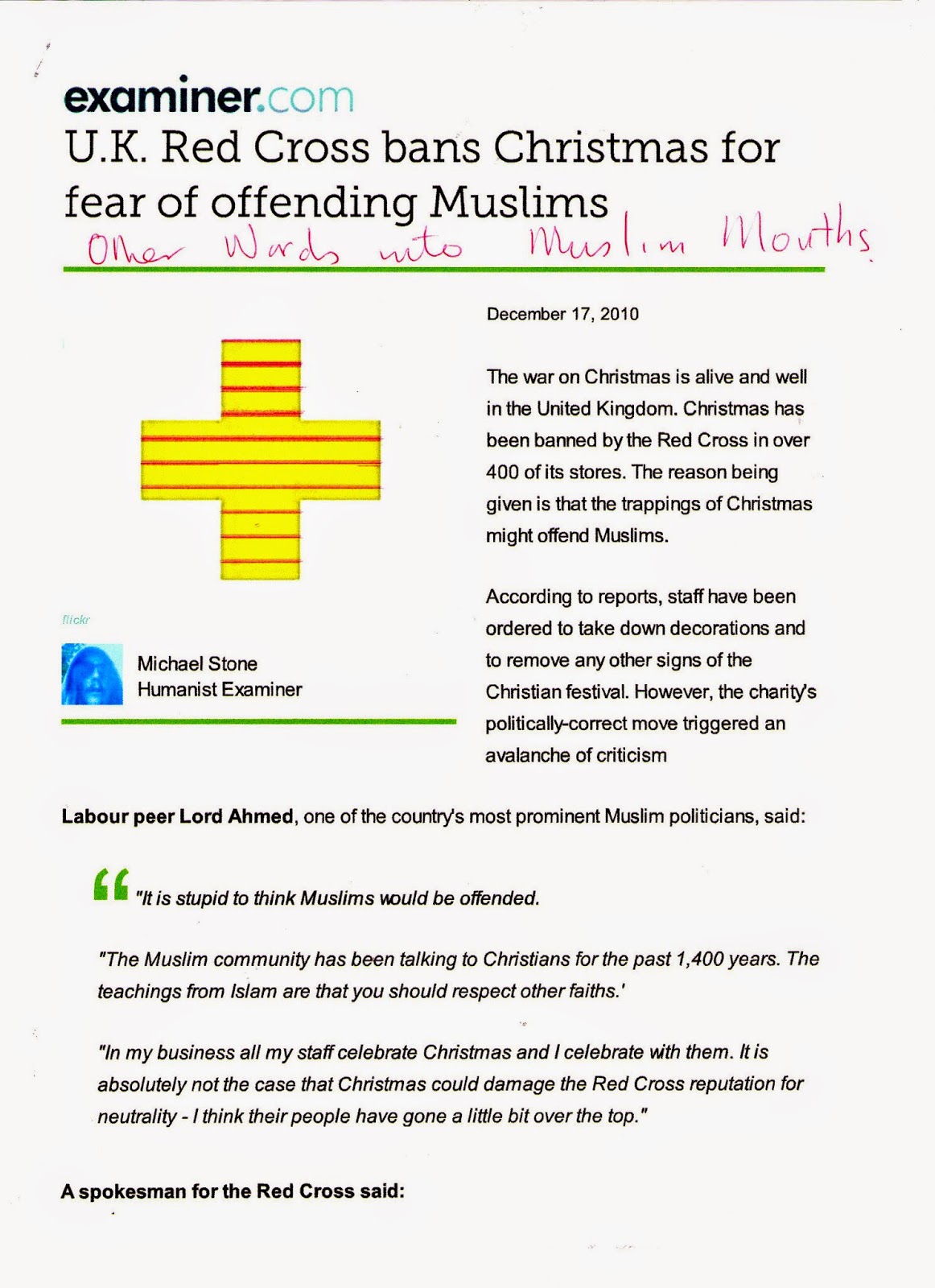 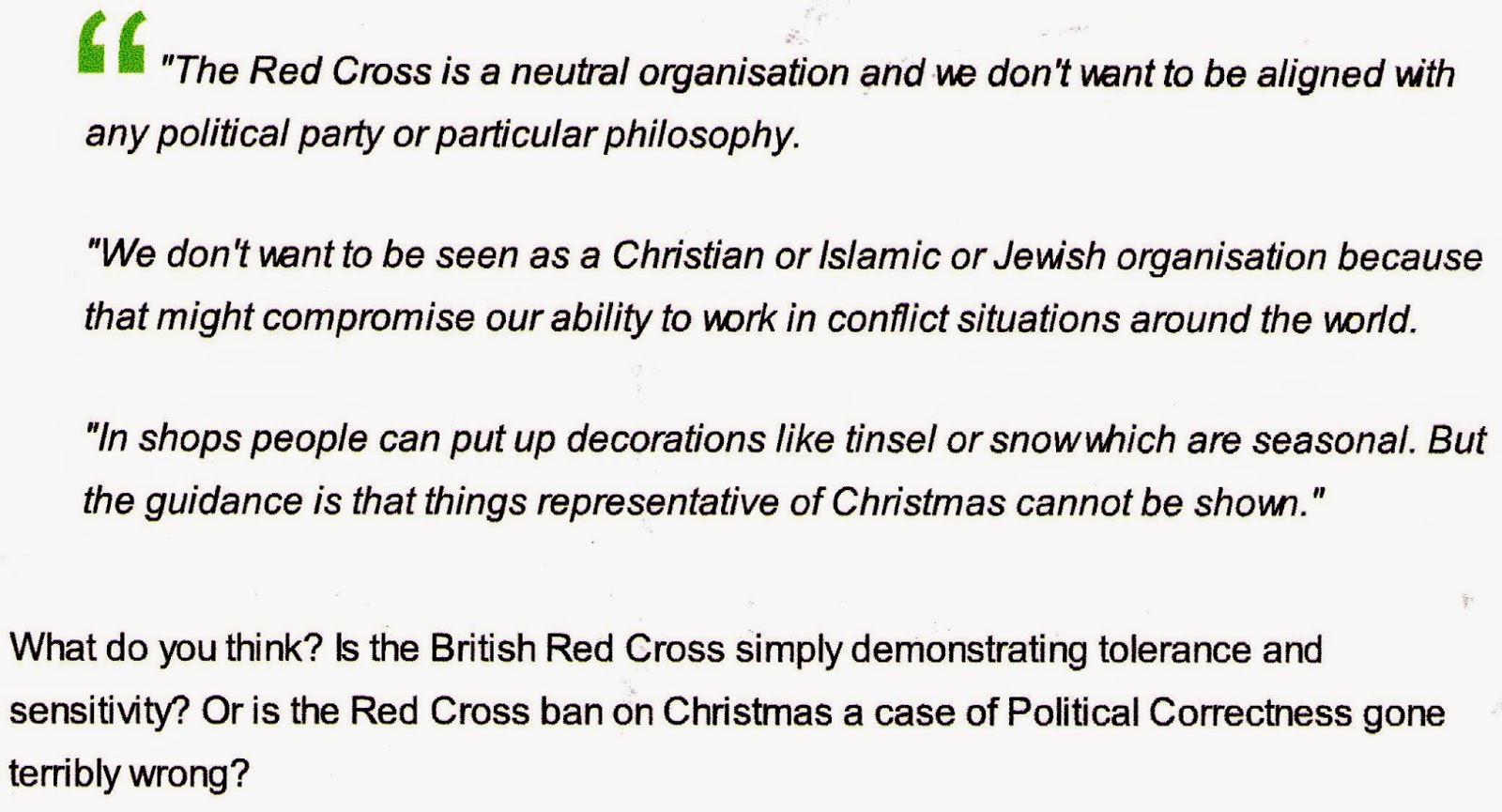 But this 2010 attitude on the part of the Red Cross was nothing new.  In 2002 we heard on the radio about  this same Red Cross policy.  In response, my irate spouse wrote this letter:

This year Stoke-on-Trent City Council decided to rebrand Christmas and describe it instead as 'Winterfest'.  Amongst other changes:

1. Christmas lights will feature Jack Frost with a firebird chasing him.  There won't be any little baby Jesus or Santa and his reindeers.

2.  Christmas cards will not carry words like 'Happy Christmas', only 'Season's Greetings' and 'Happy Holidays'.

3. The traditional Nativity Plays will not have the infant Jesus, Mary and Joseph.  There's talk of using spacemen, footballers and Elvis Presley. One resident angrily remarked,  " I assume it is so that Muslims are not offended."

Can you see the common feature here with the 2002 and 2010 Red Cross 'policy'?   Many, many white, Christian and secular Brits are being fed the idea that the "Disney-fying" of their traditional Christmas celebration is because of those bloody Muslims!   I have heard those last two words many times in many different encounters not only from white Brits but also from the Blacks and the non-Muslim Asians (Indians).   It is truly a multi-cultural reaction!


This was the response of the Muslim Council of Great Britain:

C.    CHRISTMAS AND THE ENVIRONMENT

Did the Department of Energy and Climate Change (Decc) really send out an internal memo about 'reducing use of fairy lights and cutting down emissions from Santa's sleigh"?

Were Decc employees really told to use only 'Season's Greetings' and not 'Merry Christmas' and "in the interest of inclusion, avoid images with skin"?

I can only repeat: a better way of setting people at one another's throats could hardly be imagined.   And at Christmas time of all times!!!

For another account on how to whip up scare stories for Christmas and Christians in Malaysia, this has to wait until this wicked witch can locate her broom.

To repeat the statement from the Muslim Council of Great Britain, "... may these holidays bring joy and happiness to your loved ones".

But we have also to be careful of strangers bearing gifts.

I recently stumbled on your blog while looking up stories on Pasir Panjang. It's pretty amazing what you've documented here. I'm currently working on a project related to our old coastal areas and offshore islands and would love to talk to you about this. May I have your email?

Yes, I've been doing my 'documenting' since 2008. I'm quite intrigued with your project.

InsyaAllah we could get together one day.

It would help if you could pass on your e-mail and then I can connect with you.

I shall not publicise your e-mail in my comment page.