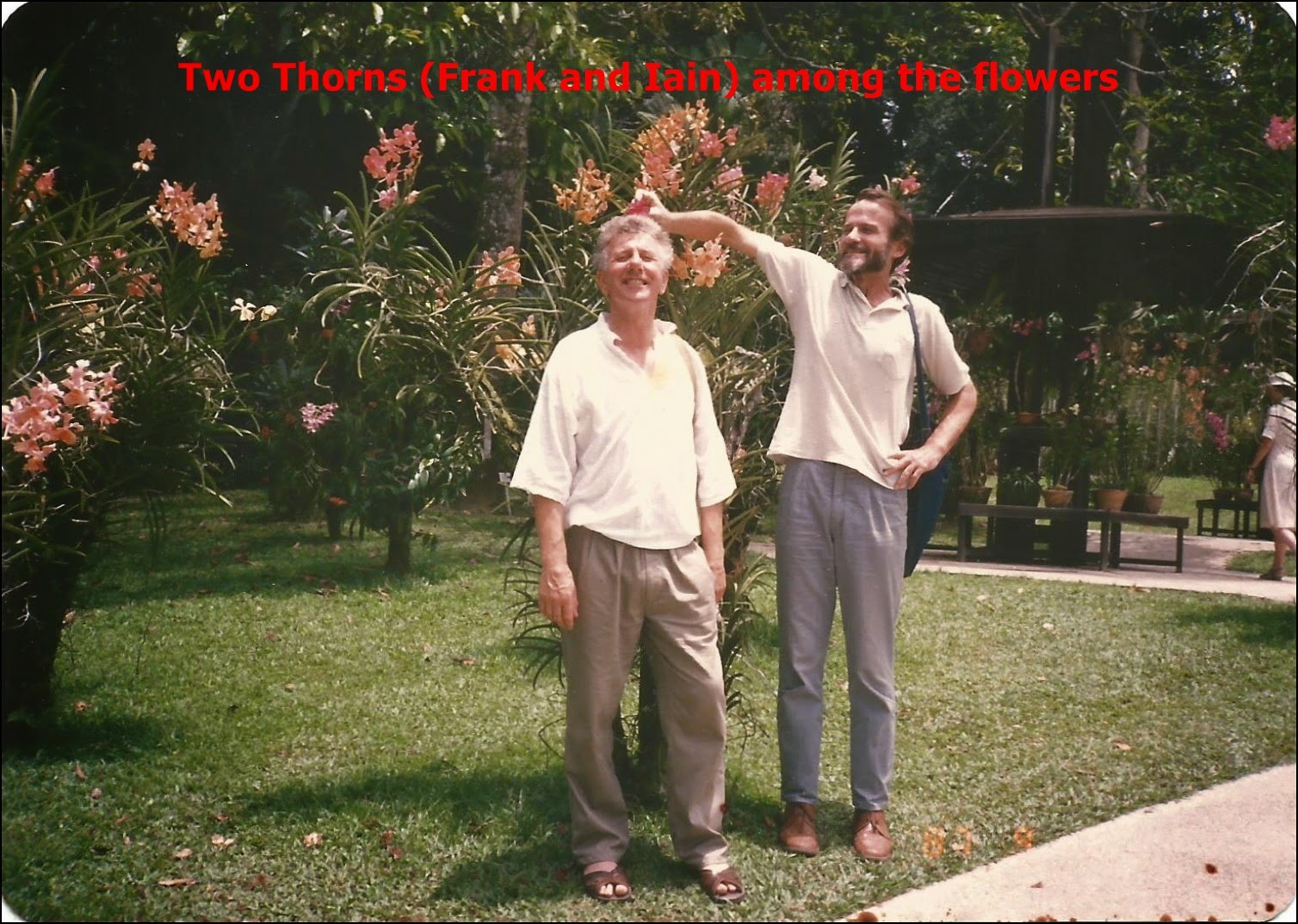 Since my last posting, about dear Frank Moule - among others - I've been thinking and recalling the great friendship between the Moules and the Buchanans.  When you reach our age, the heart and mind tend to look back, to good times, to precious friends and loving friendships.

When Frank passed away in 2002, Iain wrote and read the obituary in memory of  a former student who became a great friend. (see below)   I want this to go on the ether because it encapsulates the achievement and determination of a brave and stubborn working class Leicester man - who against all odds made his 70 years on earth so useful and fulfilling.   Iain and I often wondered if we could have achieved what Frank had : to embark on a university education in one's mid-40s  with a wife and family to look after as well.  No, we didn't think we could.

But as we well know, he could not have done it without the support, love and forbearance of Dorothy. His endearing and enduring Dot knew that Frank would not stop with his first degree, for he went on to do a part-time Master's Degree at Warwick University, which he completed at the age of 65.


This is for you Frank - and Dot - once again with all our love.   And here is that obituary, for all
to see.


I hope you don't mind, Dot, just one little lecture.  It's the only chance I'll get to give a lecture about Frank - and I'm sure that Frank would approve.

I've known Frank, and through him the family, for twenty-five years - long enough to get a fairly rounded picture of the man.  But it is in the nature of Frank, and me, and our friendship, that we concentrated a lot on books and learning and things intellectual.  It is in this I got to know Frank best, and it is with this in mind that I'd like to say a few words.

When I first met Frank, as his lecturer, 25 years ago, the thing I noticed most about him was that he was interested in the things he was studying - passionately, profoundly interested.  More than that, he saw how, in knowledge, and in the real world around him, everything connected.  Frank saw, in a way many of his lecturers and professors pretended not to see, how you just couldn't really separate knowledge into economics, and history, and politics and all the other boxes.  When Frank thought through a problem, he brought in a wide range of subjects to help him.  In other words, he grasped the essence of learning more fully, and more usefully, than most students could ever hope to.  When I first met this middle-aged house painter, this was my strongest impression.

But Frank still had a long way to go, and over the next 25 years it was my privilege to share large parts of his journey.  And what a journey it was.  There could, in the entire history of the world, be only a handful of house painters who had gained two University degrees and written a large book of memoirs.   Frank was one of them.   And through all this, Dot was there to give him support, and three wonderful children grew up and flowered in ways that made Frank feel very,very proud.

Here, in Frank's family - in the way he so scrupulously provided for them, and in the way he inspired his children - here lies much of Frank's legacy.  But today, and especially today, I want to go beyond this : I want to say a few words about what I saw, however imperfectly, as the spirit of the man.

Frank was not a religious man in the ordinary sense.  But Frank was, in important ways, a very spiritual man.  His demeanour didn't immediately suggest this : a painter and decorator for over thirty years, a sober, straight-talking man, a man who didn't warm easily to romance and frivolity, a man expert in many things like fiscal economics.

But in his own special way, Frank worshipped the same wonder of creation that the more religious amongst us would claim to worship.  For Frank was truly fascinated by the world around him : he was always, wonderfully, awake to the world and its complexities, he was always interested in a way most people are too lazy to be, and at the same time he was always aware of his very own human ignorance, of how little he knew, of how endless knowledge and learning really are.  Frank was the most frustrating of students - he always wanted more than mere lecturers and professors could give him, and he always saw through the tricks that academics used against people like him, people who really inquire, who really want to learn.

True, Frank was so excited with the world he was discovering through his learning, so, so, fascinated, that it was sometimes hard to get a word in edgeways.  But Frank only wanted to share what he'd newly learned, to have it confirmed, to debate it, and to learn still more.  Frank never used his knowledge as a kind of one-upsmanship, as a way of putting people down.  He was far too honourable a man for that.  No, most of all, Frank wanted to teach, to share, to uplift .........
and in that, maybe, he was a better man than most academics.

But what if Frank had not had to go to work at 14 with no school qualifications?  What if he'd started University at the age most people start University?  Well, he would certainly have become a luminary of some sort in the academic or political world, and he would have gone a long way with it.  But would he have kept alive the spirit, the drive that was in him?

I'm not sure that he would.  It was Frank's spirit that drove him to go beyond the building sites and the semi-detached homes and transform his life in the way that he did.  But it was, in part, the adversity he faced that made his spirit even stronger.  And this is a big part of Frank's triumph, a big part of his legacy : he proved that a shaky start in life is no excuse for surrendering to mediocrity, no excuse for not being wide awake to the world around you, wanting to understand how it works, wanting to make it better.

But in this long and busy journey Frank was taking, he was never alone.  There were friends and teachers to inspire him.  And there were also those closer to home.  Only rarely did we get a glimpse into Frank's most heart-felt emotions.  But two glimpses, for me, are unforgettable.  When Frank tells his life story, he records how, for many years, he would go to work with his tools packed in an old handbag that had once belonged to his mother.  I can only imagine the tender feelings, the love, that made him do that.  And then, some half a century later, we are there with Frank in the flesh, in hospital, as his journey is coming to a close, and Frank says:  " I do appreciate all these people coming to see me, but, you know, all I really want is to have Dorothy here, and to hold her hand. "

In other words, Frank's achievements - as a union man, as an academic, as an author - were never solitary achievements.  The family was always in Frank's mind, and always close at hand.  It was a collective endeavour, and Frank always knew that.

So Frank, that's my lecture.  And now I'd like to give the last word to my pillar of support - to my own wife, Maznoor, from Malaysia.  This is Maznoor's own special message.