" Imitation is the sincerest form of flattery ".

When you  dress, behave, and talk  like your favourite celebrity or your  hero or role model - then that imitation is regarded as flattery.

It is fascinating to discover so many other words that are synonymous with 'imitate'   and which provide so many different shades of meaning and interpretation.  This list is by no means comprehensive but here they are: words like copy, use, adopt, adapt, fit, employ, duplicate, reproduce, take, convert,  pilfer, purloin, filch, plagiarize and appropriate.

You may notice how towards the end of the list the words begin to mean more and more negative and unpleasant.

For instance;  this one of Madonna in Burqa cannot be designated as imitation-cum-flattery, it's just an ageing rock star desperately seeking attention and publicity.  Mama mia!  She did quite a lot of cultural appropriation in her younger days to boost her career , so you can't expect better of her.


If there are are Muslim hotheads - young and old - seeing this out there, please do not start a je ne suis pas Madonna!

There are also other 'desperately-seeking-attention' pop stars like Beyonce.

Dr Wafa Sultan, another ex-Muslim female darling of the Islamophobes (See Comments page of my previous posting   'Pointed Views'),  describes herself as a  'Muslim' even though she said she does not follow and practise the teachings of Islam.  I was quite confused.  It's like claiming to be a vegetarian while still consuming meat!

I found her rationale when I was sorting out my files last night. 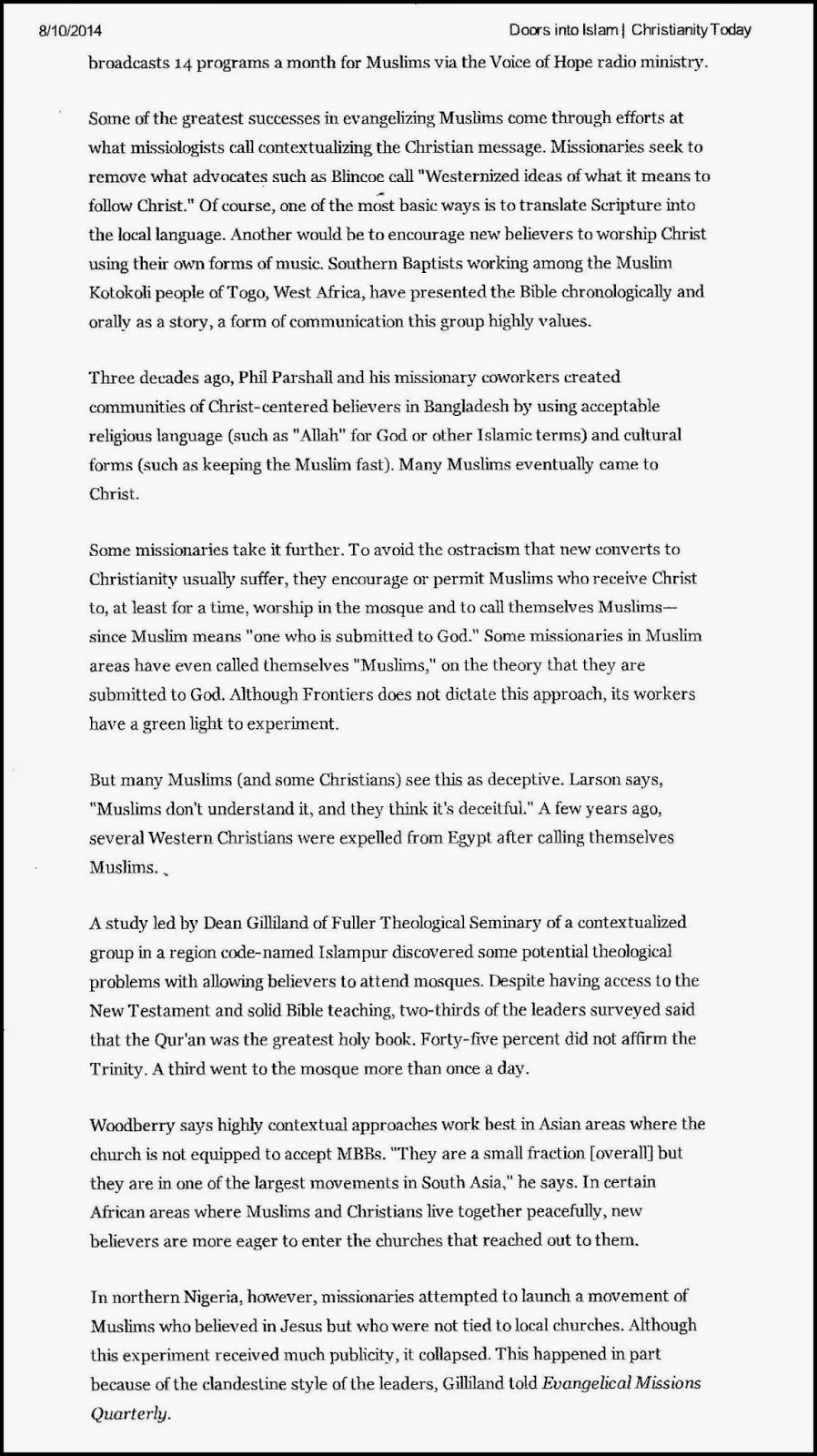 Here are a couple of pertinent extracts from the above.


The above is not imitation or adapting.  It is simply purloining and filching - another appropriation, like Madonna.

There's the proverb - ' a rose by any other name smells just as sweet'.   The rose  is named rosa (Italian),  roos (Dutch), ruzica (Slovak),  gulaab (Hindi), bunga mawar (Indonesian and Malay), warda (Arabic) whakatika (Maori)  -  just to name a few.  Consider this; would an Italian desire to substitute the name of his rosa to bunga mawar, or would Hindi speakers pick warda instead of gulaab?

In the same vein, the word God and Allah are both as fragrant and sacred whatever name one chooses.  In the case of East Malaysia (where the conversion to Christianity was a more widespread, and rather different, process to that in Peninsular Malaysia),  'Allah'  has been used in their Bibles right from the start.  As for Peninsular Malaysia (where Christians make up just 3% of the population) the word 'God'  was the choice word in the Bible like in all  European countries.  'Allah'  is the word for Muslims in Southeast Asia and for all 1.6 billion Muslims in the world.   In the same vein, please note, the word 'Muslims' refer only to the adherents of the religion Islam, just as there are specific words to apply to Christians (Christianity), Hindus (Hinduism), Buddhists (Buddhism), Atheists (Atheism), Pagans  (Paganism) and Agnostics(Agnosticism) and even Satanists (Satanism)!

Why are certain Christians in Malaysia so adamant, and so evangelical in wanting to take the word for the Supreme Being in the Quran to be used in the Bible?  This may provide the key.


This is "contextualized"  evangelization.  This is dressing up the wolf to look like sheep. This is conversion and plagiarization - the clearest example of the end justifying the means.

This is from the horse's mouth itself.

Two institutions responsible for translating the Bible for the purpose of conversion are Wycliffe Bible Translators and its sister organisation the Summer Institute of Linguistics (SIL) - a Christian service agency..  Look up SIL's Website and you'll be hard put to find explicit indications of their  commitment to evangelization.  Of course they profess not to be directly involved  in  'building churches' and proselytizing.  But they have other objectives  - even though they claim they  work only to preserve 'ethnolinguistic identity'.  Is there much difference between the arms- manufacturer and the people who utilise their products? 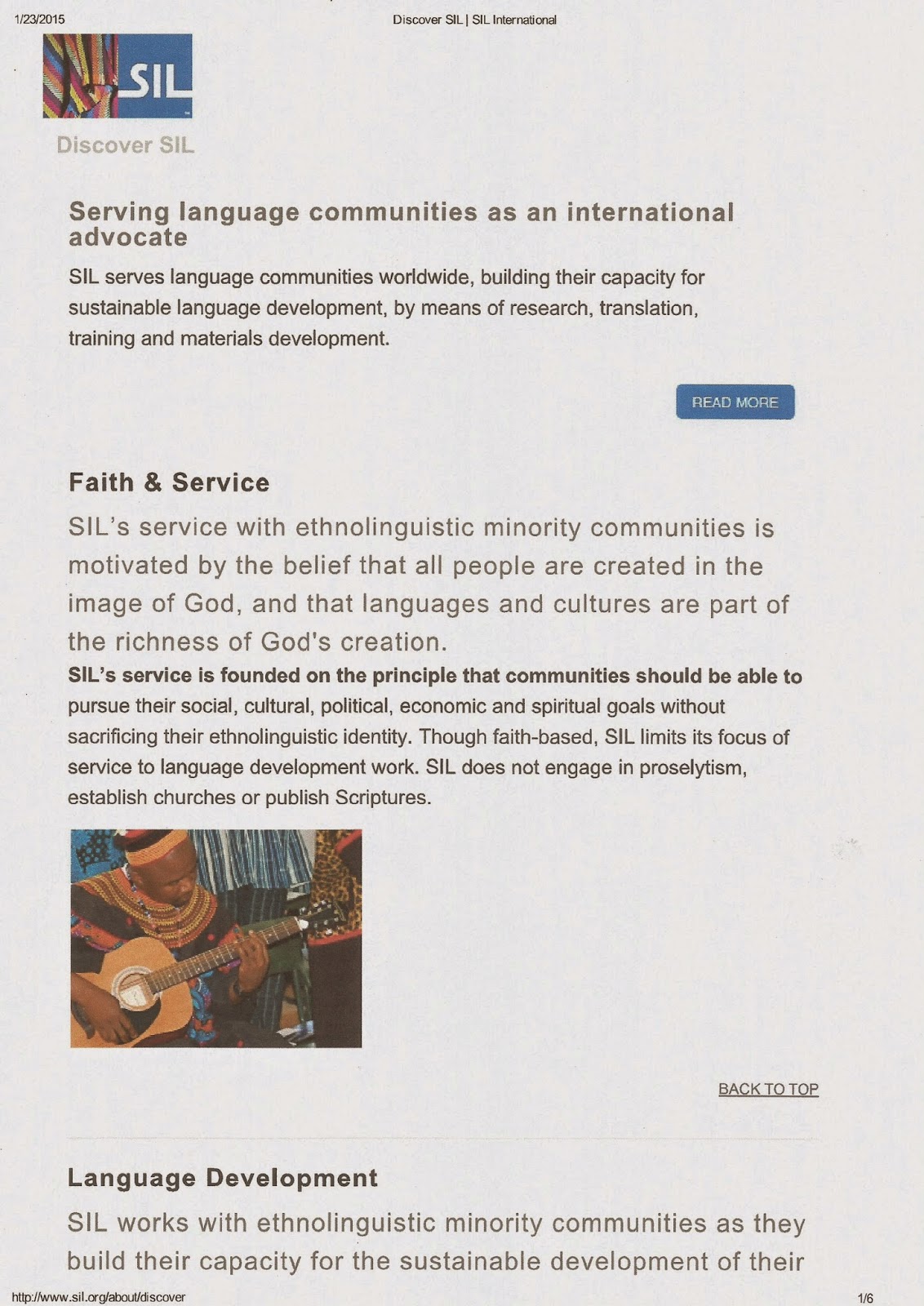 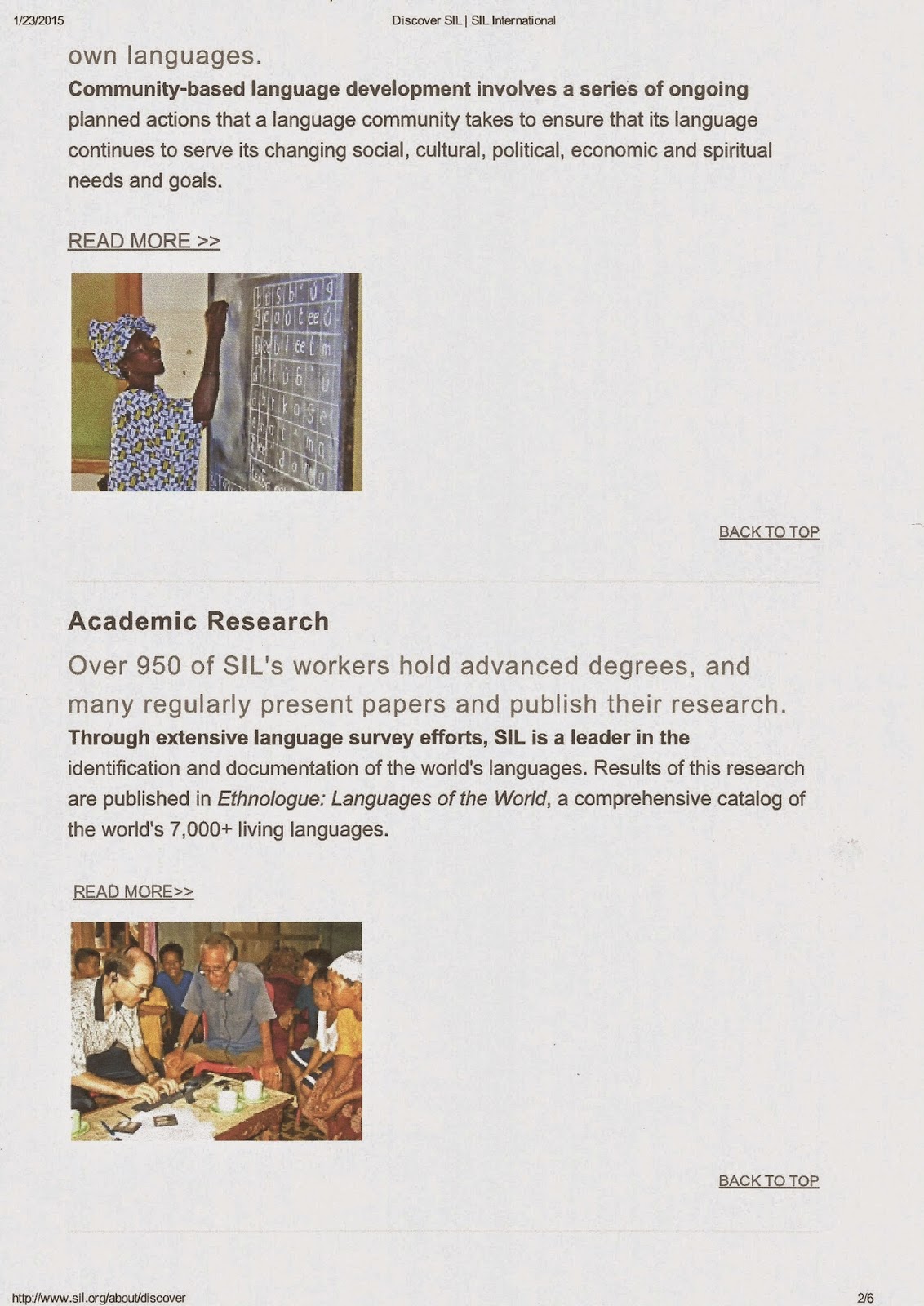 If any one can issue 'Muslim-friendly translations' for saying "Son of God",  SIL and Wycliffe will find the "loophole large enough".   After all, the word 'Allah' is well on the way to being appropriated - with the support of some Muslims and Muslim clerics here and abroad.  They, I'm afraid, have been outmaneuvered and  'contextualised'.

Next on the menu will be Chrislam, non-followers or ex-followers of Islam - converts to Christianity -  who claim to still calling themselves 'Muslims'.  According to their strategy; it  seems that they have the right to do so because  the term  'Muslims'  means 'those who submit to God' .  Consequently the term 'Muslim' would also be subjected to appropriation, away from the believers of Islam!  Hallelujah.

I reckon our Islamic experts, clergy and Islamic academics had better put on their thinking caps and figure out how to protect the  word "Muslim"  for the followers of Islam before the pseudo-'Muslims' start hammering at the gate


3.  And now for another insight into   'Black Hens Flying in the Night'


Could you guess that the picture above is not of a group of Muslim ladies and gentlemen in Bangkok?  They are  'contextually'  dressed in Muslim garb but they are Thai pastors, leaders, Bible college students and professionals taking part in a Kairos Course in 2006.

One Thai pastor was so pleased and said,  "We praise God that he has opened our eyes through this course.  We have been receiving many missionaries in Thailand but we have failed to see our part in bringing the gospel to the nations.  It is time we stop making excuses and do our part."  ( Maybe their outfit will play a large part in their missionizing.)

The report further added, " The team in Thailand aims to continue mobilizing the Thai church for missions, i.e. to reach the least-reached people groups within Thailand and beyond."

For all you know, by now, they are already hard at work in  the predominantly Muslim Provinces of Narathiwat, Pattani, Yala and Satun - where some of the "least-reached people groups" are located.  Dressed like this they would be welcomed with open arms.  Throw in a couple of 'orang putih' in kopiak and hijab, the 'least-reached peoples' would be ecstatic!


That ends my case of serial pilfering, purloining, filching, deceiving, plagiarising and appropriation in our neck of the woods,  conducted by evangelists from the world's largest and most powerful  religion.

The Allah word in Bible is exclusively for those East Malaysian Malay bible. For Peninsular Christian, no one is willing to use this word even you give them the permission to be used in other languages. The non Malay Christian in peninsular have some degree of prejudice against the Malay (including their language) due to the alleged "discrimination" against them in NEP. They will refuse this word even if you force them.

Somebody else has brought up something like this before.

Love reading all your articles Maznoor. Just discovered your blog. Reminds me of my past as I am just two years older than you. Keep up the writing. You have a fan back home in Kuala Lumpur. May Allah bless you and Iaan good health and happiness.

That's Malaysia for you. They used to get neurotic about getting their citizenship , now that that's in the pocket - they look for more boundaries to push.

As for the Malays - at least one thing has not changed - the 'dengki' and 'bodoh-sombong' is still alive and kicking - despite all the 'progress' and the religious/secular education.

I am quite familiar with that blogsite - very informative and telling.

I'm afraid Christianity has always been out for the jugular where Muslims are concerned - ever since Islam came on the scene. However they are far more skillful in their strategy - which leaves the Muslims standing.

Thank you, bless you. Watch for my next posting.