A week or so after our nephew Mahzan and his wife Sabrina left for the Hajj, their 10-year old Nabilla, while getting ready to go to bed in her grandparents' room, confided to her Tok Wan, " Tok, Bella rindu Abah". Nadia, her elder sister added, "Nadia pun sama, tok". Tok Wan then advised them to always remember to doa (pray) for their parents' health and safety. (Earlier posting on Nadia and Nabilla on 23rd May 2009)

35 years ago, on December 20th 1974, my Abah passed away. I have these photographs to record snippets of his life-a wonderful father and a man of honour. 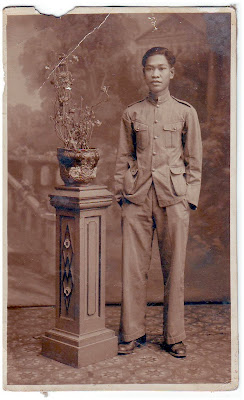 My dad, the bachelor heartthrob. While working in the Straits Settlements as a Health Inspector in Selangor he was quite a lad, running around on his BSA or Norton (?) motorbike, frequently doing the run from Pekan ,Pahang through Raub and then via Fraser's Hill and back to KL. Quite often he would be doing this at night especially over the weekend. He had a scar about 8 inches long on his right leg-a legacy of his wild woolly days. But that's my Abah - he enjoyed his youth and did no harm to nobody. He did not marry Kamisah until he was 31! 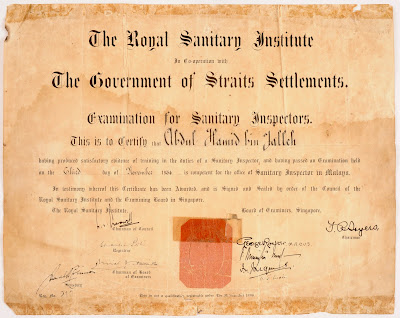 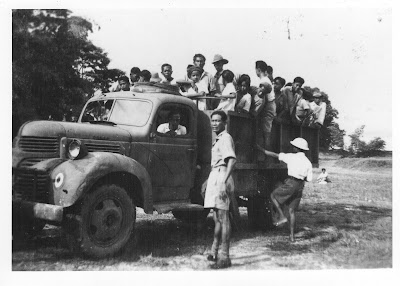 After the war, Abah was given the job of supervising the clean-up of the British Army's premises. At GCHQ Tanglin he and his workers found a room full of opium left behind by the Japanese. Several of his workers suggested that they should keep this cache and not inform the authorities. Abah ignored their 'advice' and that explains why our family is not one of the top 100 richest Malay taukehs. He very often reminded us that he can not leave us a legacy of money, houses and land (like some of my uncles in KL). He can only afford to give us a good education-something "nobody can take away from you". 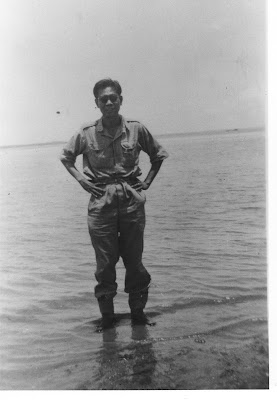 My groovy dad in an Indiana Jones posture before Hollywood came on the scene. This was taken sometime just after the war, at Changi if my memory is right. 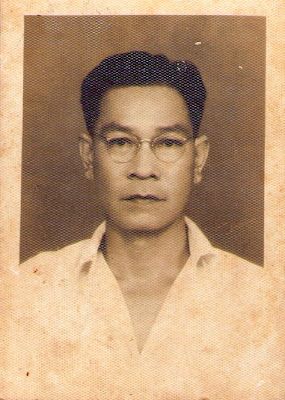 My very favourite photo of Abah wearing his John Lennon spectacles (well, almost) even before JL became part of the Beatles. 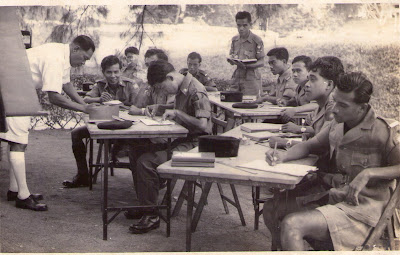 Abah at work as a Health Instructor at the School of Health, RAMC or the Royal Army Medical Corp, Nee Soon, Singapore. He retired in 1968. 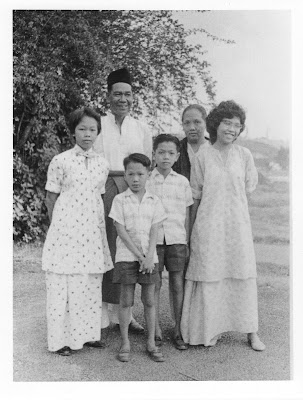 Our last family photo (circa late 1950s or early 60s) before we all grew up and became too busy for such formalities. 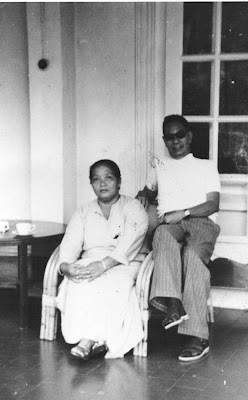 On the 20th of December, 1974, my father passed away. My sister and family were living in Batu Pahat, my brother Mus and his wife had just gone home to their flat in Jurong, my late brother Akim had rushed out to call the ambulance and I was 6000 miles away pursuing my post-graduate studies in London. My mum recalled his last few moments. He said to her " Satu tak ada, semua tak ada, ya Cha? Hanya kita bedua" (As one is not here, it's fair that it's only just you and I) He recited his Syahadah and passed away peacefully with Kamisah's arms wrapped around him.
I flew home knowing I won't even be in time for the funeral. I was the last one home.
As soon as I entered the room, Abah's clock on the wall stopped. My mother handed me a folded item of clothing. It was my father's t-shirt, what he wore when he passed away. "Your Abah told me in a dream last night to give this to you," said my Mother.
I clutched the t-shirt and held it tight against my face. That scent still lingers till today.

Bella and Nadia, I know just how you "rindu Abah". Tok ngah never stop missing her Abah as well. 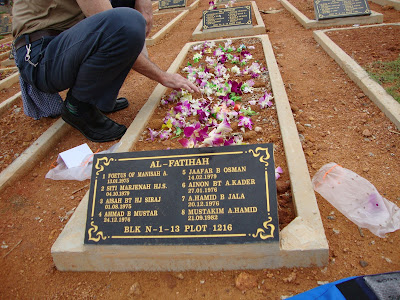 The 'new' grave at Pusara Abadi after the re-internment. They made a mistake about the date. It should be 1974, not 1976.

Al-Fatiha to Abah and Akim. And Al-Fatiha to Mak too.
Posted by anak si-hamid at Monday, December 21, 2009

AlFathiha
Abah, Mak and Akim.
Thank you ASH for the write.

ALfatiha. Such a handsome man. I remember my Abah talking about your Abah. And now both of them dah tak ada. My Abah left us in 1999, two years after Mak.

Just realized your dad meninggal on the same day as my birthday. I was 13 on your saddest day in 1974.

Sunnysideup,
Thank you for reminding me of Mother.

Dear Din,
It's odd isn't it that our Abahs know each other? I suppose it's like a continuity of a tradition.
So, happy birthday young man - a good day to remember.
And our prayers and fatihah for our dear parents. And we both lost our mothers in the same year!

Thanks for dropping in - hope you're keeping well and being good.

May I add that that just about 2 hour before he died, I had a few games of carrom and we had made a date to play snooker the next day because he promised me that he would 'coach' me on the fine tactics - an appointment we never got to fulfill !

Brought tears to my eyes this one, AsH.. Alfatihah for all the arwahs.

Alfatiha to arwah Atuk Antan, Arwah Tok Mok (cruel of the cucus to give their names...!) and Arwah Ucu.
And thank you Mak Ngah for giving us, the cucus, the person behind the name, for my memory didn't go far than the swaying of arwah atuk Antan's 'muscle' below his arm - one memory that is fondly cherished!
And thank you Mak Ngah for allowing the memory to carry on to Arwah Atuk Antan's cicit's'..
maria

Remembering our love ones in doa is always the greatest thing that we can do now.But the memories that they have left for us is the things that make us feel so close to them even they have gone now
AlFatiha...
Hope the next generation realize the true meaning of family and the history that goes with it

With some time in hand I wander around and get here.A good writing always appeals to me. Then I notice this very sad part, a subject very fresh to me, not of my dad who passed away some 50 years ago when I was far away from home,but of a dear friend. It saddens you and it saddens me. It is all too common to us all, human. Takziah kepada puan.
Pakcik