I'm at it again. When you reach my age there's no end of 'junk' to clear up. This has been my usual pattern whenever I come back to Leicester. Although some of my best bits have migrated to KL there are still lots of mucky treasures to look over with nostalgic affection.
When I was teaching English Language at USM Penang in the early 1990s I met and taught a variety of students. Most of them were fresh 'A' Level 'graduates' and quite a handful were mature students, mainly teachers doing an Education Degree.Most wonderful of all, they were a bagful of Malaysians - of Malaysian Chinese, Indians, Malays, Eurasians and bumiputras from Sarawak and Sabah. It was a privilege for me to teach them. It was a 2-way process because I learned much from them as well.
My saddest experience was when one of my students-a teacher and a father of two- came into my room for a talk. With tears in his eyes he described a fracas he had with his lecturer, a local Professor. This academic had a habit of coming late for lectures and departing early or sometimes not turning up at all. In my parlez - from years of teaching - we would classify this pendidek(educator) as a kaki ponteng or raja tuang (rabid skiver). This student of mine had reminded this academic (not rudely, according to the former) that there was still 15 mins to go. All this Professor had to say to punish and reduce this teacher to a heap of tears was - " Awak ingat ya - siapa mentimun, siapa durian" (You had better remember this - who is the durian and who's the cucumber) - a threat, an ominous one by someone powerful. SPOKEN LIKE A TYPICAL COWARD FROM MALAY FEUDAL TIMES. Despite all the expensive education heaped on this Malay Professor, it has all been a waste I reckon. "Seperti kera di beri bunga." (like giving a flower to a gibbon).
My advice to my mature student when he asked for one? Through gritted teeth I had to counsel him to apologise to this Panglima Pendidek (The Warrior-Educator).

Most of my students were too scared to speak in English even during tutorials especially these 3 Malay girls from Malaya. Strangely enough the undergrads from Sabah and Sarawak were far more proficient in written and spoken English notwithstanding their racial background! (In fact my blind reflexologist in KL who comes from Sarawak was more confident in speaking English than some of those undergrads in USM). As for my 3 Malay girls, I called them over to my room and asked why they refused to participate in tutorial discussions. Their answer was to be expected. They were embarrassed in case people laughed at their lack of proficiency. They were often mocked by their fellow-Malay mates and teachers for being orang putih celup (an Uncle Tom), for reneging on their language and culture. Haven't I heard that before, many, many times? Seperti katak dibawah tempurung (like the frog under the coconut shell). Well, after spending 1-2 hours/week discussing various topics in English in my room, my three lasses, after a month or so began to take part actively during tutorials. I could see them stumbling-but with much courage and dignity-'not to disappear'. Their classmates were happy for them and their triumph over their handicap was one of the best memories I have of teaching in USM.
Oh, there are many other stories from these students of mine who were doing my course of HEK 201. I gave them a copy of this poem by Pablo Neruda, which I thought summarised some of their challenges and agonies.Please click on the text to get a better read. It's worth looking at and I apologise for my stumbling undignified technology. Just being "my same old lazy self".
A snippet from the last stanza:
But when I call upon my dashing being,
out comes the same old lazy self,
and so I never know just who I am,
Nor how many I am; nor who we will be being.
I would like to be able to touch a bell
and call up my real self, the only me,
because if I really need my proper self,
I must not allow myself to disappear. 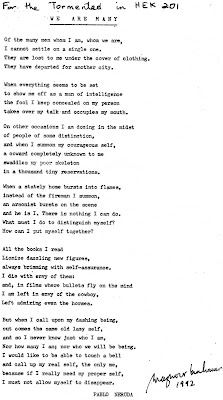 Thanks for that interesting story. Again something from the 'teachers' side. It has been my unfortunate experience of knowing an English lecturer who, in my opinion, is so jaded in his methodology.

I could have sworn he scorned at modern technology just because he could not or would not ( or didn't bother) learn and use.

His lesson would either be lyrics of old ( and I mean 'old) songs) or lesson from the dictionary. Vocabulary lessons becomes formal lessons of isolated vocabulary AND of words long enough to be forgotten and probably never ever be used by the students throughout their life !

Is it any wonder our Malaysian students still do not have the confidence to use the English language ???????

Details fuzzy now but I've not forgotten how you came in to our class (Sec 3F?)in 76 with the cassette player and forced us to listen to the Beatles' She's Leaving Home. "Wednesday morning at four o'clock when (and?) the day begins ...".

I remember the essay I wrote based on that song. Years later I would know the Beatles like the back of my hand, and discovered how much my earliest interpretation of the song differed from the original. Still, I like my version better.

In any case, it was not about the Beatles that morning, it was English language class! You were so amazing! Even the Boyan (Suhaimi) started to get really interested in the language. And in the Fab Four!

I told myself if I were to end up as a teacher, I would do what you did that morning to get the kids interested in the English language.
But I didn't become a teacher, and perhaps that's a good thing ....

AsH, the professor you mentioned was such a real baghal (ass).. saya baca your account pun rasa marah..

i agree with Rocky, you're amazing, then and now.

i wonder what happen to that Boyan,will love to bump into him.