Tit-for-Tat : The Sins of the Fathers


In the 70s and 80s (before I got hitched up) I used to visit Britain quite often. I had to go to the British High Commission to get a visa and each and every time I had to show proof that I am economically active and financially able to visit such hallowed shores. Also I had to show a return ticket to my motherland or my country of departure.
I had the feeling that the authorities were not too happy with these non-Caucasian visitors. Now where did I get that idea? Anyway, there was one time when I presented my letters from my bank, from my employer and my return ticket even before the Immigration Officer asked for them. He gave me a rueful smile and said, "Well we have to be careful about, you know...". I returned his smile and replied, "Yes, it's the sins of the fathers...."
I was referring to "....for I the Lord, thy God am a jealous God, visiting the iniquities of the fathers upon the children". 20.1 Exodus BIBLE.
To be less pompous, all it means is: 'we are here because you were there' despite the sun setting on the Empire.

20 years later I read this in The Daily Mail September 11, 2008
"A leading ____________ has warned uncontrolled immigration may lead to more violence on the country's streets....Mass immigration could change what it means to be British......His cross party group is calling for a 'one in and one out' policy in a bid to reduce pressure....It takes time for people of different cultures to get accustomed to each others' ways and, regrettably, not all newcomers are committed to integration. Some are not even sure about the democratic values that are the very foundation of our society."
Disrespect for democratic values? Now, wasn't that Bush's and Blair's reason, amongst many other concoctions for attacking Iraq?
WHAT IF ..... a leading voice in the then Malay States complained in the same manner about massive immigration during the 1930s? If this leading ________ has this fear for his country, what were his forefathers's intentions in "bringing the benefits that immigration brought" to the Malay Peninsula. Perhaps his leaders could learn a thing or two about living and coping in a multi-racial society like Malaysia! We don't claim to be masters of the game, but Malaysia is not doing too badly even after 52 years of independence.

To fill in the blanks : write down Dr George Carey, now Lord Carey. He was the Archbishop of Canterbury (head honcho of the establishment Anglican Church in Britain ) from 1999 to 2002. 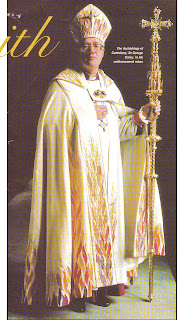 I am a magpie, a collector of inane and sometimes useful rubbish. I found this interesting information in a handicraft magazine 'Beautiful Stitches' - July /August though I don't have the year. It must have been around the late 90s when Dr George Carey was enthroned as the Archbishop of Canterbury. According to the magazine, this enthronement robe was commissioned to Juliet Hemingway's Studio. This is the headquarters of Church Textiles where stoles, chasubles, banners and mitres are 'dreamed up, designed and stitched'. According to Juliet, "Enthronements are held on martyrs' days. This particular day it was the feast of St Alphege the Martyr ..... , and I wanted to symbolise the martyrdom in some way. I also wanted to show the holy spirit, which is often represented by flame. The purple tones were reflections of the amethyst in the Howley clasp, which is a magnificent piece of jewellery worn at the centre of the robe.".. What was Dr. Carey's response when he saw the robe? "It's splendid".

Lord Carey - retired Archbishops automatically become members of the House of Lords -did worry that "it takes time for people of different cultures to get accustomed to each other's ways". I am quite certain any immigrant can get used to the display of such 'democratic' fineries and pomp.

MS hamid, I remember reading this article and of course one of thereasons why people in th etube raised their eyebrows when they see someone likenme readinhg The Daily Mail.
anyway, the immigration officers - what race were they?

There's a true story about one of our VIPs who landed in hot soup at the immigration in Heathrow when he was aksed: HOw long do you intended to stay?
His answer: Not as long as you.

I have been meaning to write to thank you for the most wonderful gift, the Haji's Book of Nursery Rhymes. Takes me back to primary school days when Father brought home a copy from Kedai Buku Pok Loh Yunang (now threatened with demolition by our Terengganu post-modernists), and I remember we all enjoyed it, and the beats of Dang-dang-kong played on and on in my head. Then, in students days, I spotted a copy in a second-hand bookshop in Charing-X Rd, but was too skint to buy it. Then it was gone but it has come back through your good hands. I am so proud of it that I flashed it at the Writing Workshop at UPM. "This", I told them, "is the book that taught me the rhythm of words. And it was gifted to me by Anak Si Hamid." See? I too can make a verb from a noun.

Sins of the father most definitely. I was once at my wits end when interrogated by an immigration officer at Heathrow about my resident status. She wouldn't take any old answer as the one she sought. Finally, exasperated, I said, perhaps it's because my grandpa was born in what was once known as the British Empire. Not without irony, you understand. She beamed like the sun in this brief English summer and stamped 'Leave to Enter' immediately in me old steam-powered passport (dis was before dem microfische and chips).

Once in KL a nephew of ours wanted to follow to London. So off we went to Jalan Ampang, only to have his passport thrown back (literally) at him, and a demand for him to produce his bank statement was made. He lived in Penang, and Penang was such a faraway place to go back to for scraps of bank notes, even for an old Boy Scout. So we - ahem - pulled strings (we had g-strings to pull then), and the passport was duly stamped but with the Brit High Commissionaire (for it was he)complaining to our then string that I was rude to their lady Immigration clerk. Rude? She it was who chucked the passport at us, and the file too for good measure, and she was a right old sourpuss. (She belongs to our Staff Room, eating bread and condensed milk and Oh-valtine with teachers Pokku and Anak Si Hamid, and Iain, the expat Head of planetary mechanics).

Soon they'll introduce visas for Malaysians who wish to see the White Cliffs. They'll be rich, you bet. All hefty deposits shall be kept securely in Her Majesty's safe for now and ever more, even if you have failed in your application to view Buck House in the noonday heat.

They say this measure is necessary because Malaysians have largely misbehaved in this land of creamers and glucose syrup. But yesterday the news writ large was that thousands of Brits have been nabbed abroad for unruly behaviour. Jeez, as ol' Barry McKenzie of Oz used to say, they'd give their a*s*hole away and shit through their ribs.

Sorry what was meant to be a Comment has become a blog. But thanks for the Haji's Book. Power to the elbows of you both.

oh dear, look at my typos and tenses - was typing from under the duvet and that's why. Now am up and about and I am sure my other half is most displeased with my typos. sowwy! am off to the cabinet war rooms to see what Churchill was up toin his hideaways.

Dear Kak Teh,
As you prefer to burrow and write under your duvet, the end result is not surprising. It would happen to me too if I pick up such a naughty habit from you youngsters.
We prefer to pick up the free leftover papers like The Sun whenever we used the Tube in London. Then Iain has a tough job keeping me away from Page Three (that was some years ago - dinosaur period!) 'features' - Phwoah!!!
Yes, 'my' Immigration Officers were the British Bumiputra. That's what I love about the BBs - they do have a sense of humour. But as most of the frontline officers are now mainly non-caucasian - I have to keep a straight face.

Assalamualaikum AG,
Cor blimey - your mini blog is a smasher!! I'm happy you found the book useful and entertaining (?). I reckon those of us who straddled the English/Malay form of education will have to be gazetted as 'Protected Species' - especially for someone like you who is also adept at Trengganu-nese dialect.
Why are High Comm operatives such a pain - g-strings are not too popular with such pompous so and sos, maybe if you could soothe them with Bach's Air on G-strings ha ha.

But I must say I can get away with tongue-in-cheek cheek with British Bumiputra Immigration Officers. They looked at my passport and asked if I was still married (to a British national).
So I said, "Unfortunately, yes. He's standing right behind you!" and she gave just a little hint of a smile. (Musn't give these natives too much face you know. Give them an inch and they'll take over our high street, our law and accountancy firms and out chish and fips haute cuisine.)
As for unruly behaviour, even the Europeans are scared of the English. The Scots are in a different category - must be careful how I designate them. They belong to the same tribe as the Expat head of planetary mechanics. I like the description - he does belong to another planet but his mechanics is only limited to the utilisation of blue tack.
Still, thank you for 'menjengok-ing' this blog.
Have a good Ramadan AND please do something about your wife diving under the duvet - she's not setting a good example to your cats.

"There's a true story about one of our VIPs who landed in hot soup at the immigration in Heathrow when he was aksed: HOw long do you intended to stay?
His answer: Not as long as you."