Tears and Fears in cosmopolitan London

At London's Hyde Park, Great Britain held a ceremony to pay tribute to the 52 innocents who died at the hands of four Muslim bombers (the religion of the perpetrators never fails to be mentioned) on 7/7. 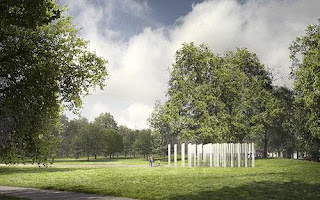 52 stainless steel pillars were constructed at Hyde Park to commemorate these deaths.
(This is only an artist's impression. The real memorial which costs one million pounds, is quite stunning.)

Among the dignitaries present to grace the occasion were -
1. Prince Charles, the heir to the British throne who is well known for his pronouncements on peace. He also holds the ranks of Admiral in the Royal Navy, Air Chief Marshall in the Royal Air Force, General in the Army and Colonel-in-Chief of the Parachute Regiment. He spoke of "...the brutal intrusion into the lives of thousands of people" and the tragedy of those who "did not walk away away from what happened on that awful day."
2. Tessa Jowell, Humanitarian Assistance Minister, who saw the memorial as a place of great beauty and great pain.
3. Sir Trevor McDonald, a well-known and popular newsreader, gifted with a mellifluous voice and impeccable RP accent, himself a non-British-Bumiputra from the Caribbean, who read out the names of the dead.
Gordon Brown was there ,of course. But what can he add to the ceremony except maybe dole out more money for this crusade against Muslim terrorists and Islamic rogue states?

Tears and Fears in Granai, a small village in Afghanistan - their 4/5

On the evening of 4th of May, the innocent villagers of Granai in Fatah Province in western Afghanistan were hit by a '2,000 pound guided bomb dropped by a B-1B strategic bomber'. 'In less than half an hour, 147 children, women and men were killed - 'the biggest single loss of civilian life since the 2001 US and Great Britain's invasion of Afghanistan.'

This is their Monument. 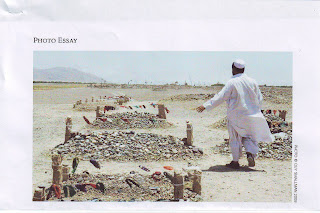 Guy Smallman, the only western photojournalist who visited Granai wrote:
".... high above Granai lie row upon row of traditional Muslim graves. My guide took me to the resting place of his sister and her children who died in the final airstrike.
He said that some of the graves contained entire families. .....At one end of the village cemetery lies an enormous mass grave stretching 30 metres across. It contains the remains of 55 people who had to be buried together as it was impossible to match the body parts recovered with individuals".

At Hyde Park Prince Charles talked of his 'grief and anguish' at the 'appalling aberrations in the human consciousness which produce such cruel and mindless carnage ... an inhuman and deplorable outrage" when referring to 7/7. Will you be able to repeat this for 4/5 in Granai, Sir?

And who will be called upon to read out the 147 names? It would take too long and anyway people would stumble over the pronunciation of such foreign syllables.

John Donne wrote - Any man's death diminishes me.
But some peoples's deaths are more painful than others. It all depends on who is pulling the trigger.
Posted by anak si-hamid at Sunday, August 30, 2009

AsH,
Salam, sad isn't it? As though the loss of so many innocent Muslims' lives are nothing. The trouble is the the 'powerful' Muslim nations are so silent over any loss of lives of fellow Muslims whereas the Western Media kept highlighting the victims of Muslim so called terrorism.
Selamat berpuasa to you both.

Thank you NanaDJ,
Your analysis is so right. It makes me depressed when I think of what our 'powerful' Muslim nations have failed to do.

Have a peaceful Ramadan to you and yours and a happy Eid - not too long now is it? Insyallah

right of course,sudan is out of the question ,i suppose.btw,insulting other religion must be easy for moslems just like in shah alam,disgusting brutes!man! you such a hypocrite and yet,you demand respect ?

life is a two way street!

To Anonymous 1.47, Thank you for your comment. I thoroughly agree with you about 'two-way streets' but it does depend on where the streets are.
This little homily doesn't apply if you live in Afghanistan, Iraq, Chechnya,Mindanao, Pattani, Bosnia (some years ago), Xinjiang and other little Muslim enclaves.
I don't know what's going on in Shah Alam to rattle you so. Perhaps this may help you now and in the future: "Sticks and stones may break my bones, but words will never hurt me." We Muslims are quite used to being demonised - not just in some town in Malaysia but on a global scale!
Muslims don't DEMAND respect. They only want JUSTICE.

You're so right sunnysideup.
Anonymous should also talk to Obama and Brown and the PM of Australia ( what's his name?) and not forgetting the President of France, Monsewer Carla Bruni?

typical response from a moslem especially a malay.

i find this statement quite funny "not just in some town in malaysia" why? because the muslims are the one who are doing it to others(hindus ,in this case) even on the holy month. don't try to twist facts!! you just can't face reality when the muslims are in the wrong.hence ,the word hypocrite...

Islam greatest enemy is not the christians,judism,hindus,america or israel but muslims themselves.

To Anonymous 5.34,
Your comment is a typical response of a Christian? Hindu? Jew? American? Israeli? but then at least they would all have a better grasp of analysis than you seem to have. So just where do you belong? You know where I belong.
If you find that particular statement 'funny', you do have an odd sense of humour!
Just what have the Muslims of Shah Alam committed to be regarded at par as 7/7 and 4/5? I admit it is particularly irrational and shortsighted for them to do what they did, Ramadan or not. Why decapitate that poor animal to make a political point whatever the justification?
This is not unlike the British (British Bumiputras or not, they were certainly not Moslems, oops I mean Muslims) who hurled a pig at a mosque in Leicester some years ago.
Indeed Muslims are their own worst enemies. That makes it simple for the "christians,judism,hindus,america or israel" to pursue their agenda. I'm glad you acknowledged the latter two.
As for facing reality, my postings of Aug 22, July 17, July 12 should dispel your accusations.
Next time you write, do let me know who you actually are or represent. Otherwise it smells of 'lempar batu, sembunyikkan tangan".
And thank you for keeping the Comments page lively.

ASH,
Salam, sad too to see some people (including the anonymous)are just too naive and have pea brains that are stunted, thus could not understand and differentiate the issues in your postings. Just could not see the difference between "kapal terbang patung" and B747? No wonder we always see the hearts of societies we live in are in turmoil and the land we stand on trembling with molten lava underneath.
I live in Seremban, NS (bukan New State)and love to go for my Friday prayers at Jamek mosques. What make me feel at peace (saw some shed tears)is that they always pray (doa)for the safety of muhajideens of Afghanistan,Iraq,Chechnya, Mindanao, Pattani and for all Muslims who are fighting for their rights to live in peace on their own lands (tanah tumpah darah ibunda)and practise their own culture. (How come they are labelled as extremists or terrorists?)
Wonder why Govt mosques are afraid in their prayers to include and mention these suppressed and suffering Muslims? Is it becos of politics?(If can't help them with guns, doa will be suffice. Ni doa pon takut?). Is it becos we are proud Malay Muslims as we care most for our own puak, becos Malays are special Muslims? Chinese Muslims (Muallaf)cannot build (susah nak bina) masjid. (Maybe their Islam or faith not to the mark yet, like the Indian and Pakistani Muslims?)

To Anonymous 1.47, 5.34,
1, Totally agree that 'respect/life is a two way street'.However if your car is being hit from behind by a blue proton, you can't hate every blue proton on the street right? (hmm ...well, unless you already had a deep seated hatred towards all blue protons before the accident!)

2, Correct you a bit, muslims' greatest enemy are the munafiks(ie those who pretend to be a muslim but not).

3, Funny, I'm sure whatever the person did to insult another religion, it is NOT a teaching of Islam, and yet you demonised the 'muslim' ummah. Why not you say 'the javanese' or 'the minangs', or the '55yr old' instead? I guess that not all javanese, or minang or 50 yr olds share that same despicable trait. And FYI, not all muslims are like that, so stop stereotyping us...if you feel you deserve our respect.

There're people who love to to be heard even though they don't know what the hell they're talking about or even if they make a fool of themselves.

Just a footnote to your blog.

Rachel North, who was herself caught in the blast of 7/7 in London, said in her talk at Abrar House, London, that in the blood and carnage, one Muslim woman took off her hijab to bandage a wounded person.

Hiya AsH, all of a suden your comment page is a lively place to be!