All Dressed Up (or Undressed) And Nowhere To Go

There has been quite a lot of news lately about dress-codes.
Firstly there was the case of a Sudanese employee of the UN's peacekeeping mission, Lubna Hussein, who was given a dressing down, to put it mildly, for wearing trousers. 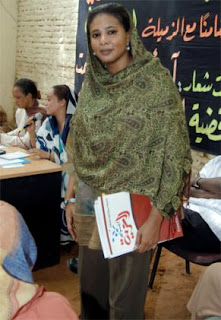 The Islamic Government of Sudan said that she had to face public flogging for "offences against public taste". It seemed that she turned down the offer of pardon by the Sudanese President and intended to fight the law. Hurrah for Lubna Hussein!!
Anyway the Western Press had a field day using this news to clout Islam. In this case the Muslims in Sudan, especially, asked for it.

Secondly, Alton Towers, a major tourist attraction in England has banned (10 August) Speedo tight, skimpy swimming trunks at their waterpark. It was said that "while women may hail the return of the skimpy bathers" (why women only, one may ask?) it was not appropriate for the family-friendly nature of the theme park.
Kudos to Alton Towers! Will Speedo and the masculinists sue Alton Towers? What if Alton Towers was located in say, Malaysia? The human rights hounds will be upon this country like a ton of bricks!

Now hold your breath for this third example.
Going topless on beaches is so passe, my dear! Such feminist chic started in St Tropez in 1964 but now it is quite unfashionable. The reasons given are (1)Aids, which put a spanner in the sexual revolution, (2)fear of skin cancer because of ozone depletion and (c) the feminists are refusing "to give in to the endless
pressure" to parade their 'perfect' body.
There is actually, no ban on toplessness on French beaches except - this summer - the beach at Paris-Plage. Again the feminists are quite riled up because the Islamic veil is allowed!!
We just can't escape criticism, can we?

Just a plea. Can we ALL be a little bit more understanding and tolerant, a little less self-righteous and hypocritical and let a wee bit of "love fly like a bird on the wing"?

I came to know and love this song via my beloved brother,Akim - who left us 27 years ago, in September.
Posted by anak si-hamid at Wednesday, August 12, 2009

what a dilemma! to bare or not to bare, either way appears unbearable. ;D

p.s. that's a lovely tune. thanks and al-Fatihah to your late brother.

I still like the care-free , easy atmosphere of two people in their jeans with picture of trucks in the background and the the apraying of water from a hose that was potrayed in the Levis advertisement with this song in the background.

mekyam,
you're impossible! Still, that makes you very bearable. Thanks for the comment and the kind thoughts.

Ms. Chaya,
Thanks for the comment and welcome to my world.