The Three Wise Monkeys and An Old Soldier 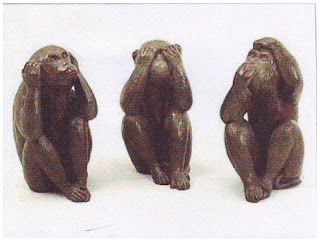 Of the three wise monkeys one speaks no evil,one sees no evil,one hears no evil. When we were young it was easy to differentiate good from evil and right from wrong. Although this dichotomy becomes more complicated with time, politics and politicians have a habit of oversimplifying the situation. What suits us is good, what suits others is evil. The goods we sell are perfect, other people's products are defective.
Patrick Mercer MP (Conservative) is an odd monkey. Although we all would say we speak no evil, see no evil, hear no evil Patrick Mercer's political stand and articulations in the media smack of mendacious propaganda at its worst and plain western humbug at its best. Mercer was a career soldier, an ex-Colonel and came to Parliament via BBC Radio 4's Today Programme, and as freelance journalist for the Daily Telegraph. Between 2003-2007, he was Shadow Minister for Homeland Security but lost the post because of racist statements made about ethnic minority soldiers. Today he heads the House of Commons counter-terrorism sub-committee.
Mercer Speaks no Evil
Patrick Mercer is often quoted as the voice warning Great Britain about the perils of terrorism, i.e. Islamic terrorism, in his country. On 1 August 2009 he expressed concerns about MI5 recruiting al Qaida sympathisers. Before that on 22 Feb 2009 he spoke of " a terrorist attack to rival the 7/7 outrages as almost inevitable in the near future."
"Their sole aim is to carry out out another 9/11 or something similar to the foiled plot in 2008 to make a mass suicide attack against airliners with home-made liquid bombs."
According to People.co.uk "MI5 is monitoring more than 2000 suspected terrorists... Young British Muslims are being radicalised at a higher rate than ever. ...killers have the means to unleash a chemical, biological or even nuclear strike. Mr Mercer said security officials believe terrorists could launch an attack at a major televised sports event to cause maximum international impact."


Despite his statement in March 2007 about how he had met a 'lot of idle and useless ethnic minority soldiers who used racism as a cover", his career has not suffered at all. According to Mercer, being called a 'black bastard' in the army is no different from being called a 'ginger bastard' or a 'fat bastard'. However I would challenge Mr Mercer if the army dares use 'Jewish bastard'

Mercer Sees no Evil
What is Mercer's take on his country's culpability for torture and other alleged war crimes? According to the Guardian of 22 August "MI5 participated in the unlawful interrogation of a British resident now held in Guantanamo Bay, the high court found yesterday in a judgement raising serious questions about the conduct of Britain's security and intelligence agencies." This is certainly a case of turning a blind eye, of putting on blinders and saying 'I see no evil.' 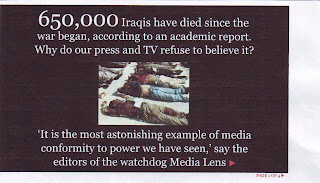 The sound of the indifference of the British print and electronic media and of course Mr Mercer is quite deafening.

This song is specially for the hearing of Mr Mercer and his ilk. Stay sweet for (1) the agenda of the arms industry and the security companies, (2) for the warmongers and the islamophobes and (3)Britain needs a distraction and diversion from the country's economic, political and social woes.

Before mass leaders seize the power to fit reality to their lies, their propaganda is marked by its extreme contempt for facts as such, for in their opinion fact depends entirely on the power of the man who can fabricate it. Hannah Arendt
P.S. In the 2007 House of Commons Register of Members' Interests, Mr Mercer is not only affiliated with the BBC but also with several Security Companies like Blue Hackle, Saladin Security and the Hart Group. Such companies provide security and protection to the West and their Allies in the world's troubled hotspots like Iraq and Afghanistan.
Posted by anak si-hamid at Tuesday, August 11, 2009