The Saga of the Saga Seeds (CsH)

The photographs in this (except for the last two crummy pictures which are of my making) and later postings are by courtesy of my former student Lely, who, in the last 6 months has been transformed from a laid-back maknyonya to an obsessed and imaginative nature photographer. More of her marvellous work can be found at http://www.photoblog.com/pickledherring.


This is the elegant saga tree 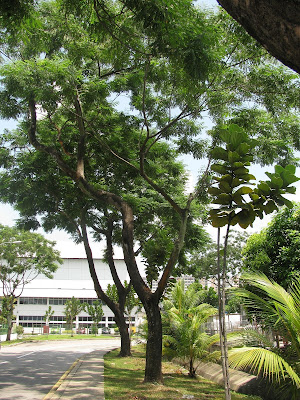 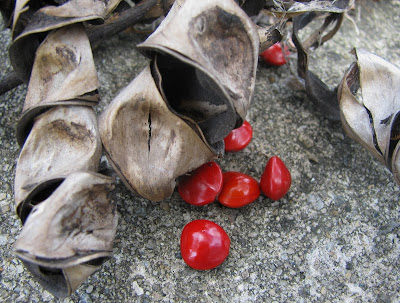 the saga seeds which had given me much joy and grief when I was a pupil at Pasir Panjang Primary School. We, especially the girls loved these beautifully bright red and heart-shaped seeds. We used to pick them from the ground on the roadside near our school. The seeds are stored in a pod and will fall when the pods ripen and turn a brittle brown. Many a time you will find a number of girls huddling and scuttling under these trees to pick the seeds. Of course when such scanty things are coveted by 4-5 pairs of eyes, you can expect a mad scramble followed by quick-fingered stuffing into pockets before making your getaway. Sometimes, you can see a couple of ripe pods with the seeds shining like red rubies still on the tree. Any red-blooded kid has to throw a branch or a shoe to bring it down. And there is an unwritten code of honour. You do not pick for your own any seeds brought down by another aficionado of saga seeds.
Then someone devised a diabolical scheme to accumulate loads of saga seeds without having to work for them. This was our first introduction to free market capitalism and Wall Street style shenanigans.
It was so simple like any other get-rich-quick ruse. Two punters would each put down 10-20 seeds. Then they cham cham pas (somewhat like scissors and water) to decide who gets to go first. Next, you sprinkle the seeds on the table and your task is to draw your finger between 2 seeds - but you must not touch either of them. Then you flick one against the other like tiddley winks and they are yours to keep if you are skilful enough not to hit the other seeds. And so it goes on until you mis-hit your seeds. It looks like this. 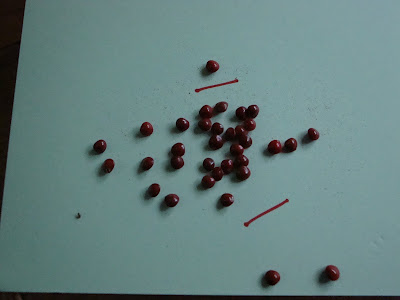 Voila! Winner keeps two.
But there was one conniving girl who would scoop up all the seeds for herself at the heartstopping moment when teacher enters the class. She was eventually blackballed, or rather, redballed.

I wasn't any good at this high-table gambol because of my podgy fingers and I lacked the killer instinct. And I lost it all when my seeds flew like they had been hit by a tsunami. But someone was watching my humiliation and felt sorry for me.
A few days later Ang Hock Kee shyly approached me and handed over a heap of those precious seeds. I was astounded and thanked him most profusely but quietly in case the other kids might hear. Then I noticed he had lost a tooth and asked why? He said he had taken a fall from the saga seed tree. Oh, poor Hock Kee. He was so embarassed and quickly walked away. He was indeed my hero and I wished I had told him so there and then.
I went on to Crescent Girls School and Hock Kee to Pasir Panjang Secondary School. His house was not too far from the corner of Yew Siang Road (to the school) and Pasir Panjang Road. I often saw him just hanging out in front of his house - he posed better than James Dean ever could. I would give him a wave and a big smile whenever I saw him there - when I was on my way home from school or when I was cycling to the market at Alexandra Terrace.
Those were precious innocent days when a little Malay girl and a little Chinese boy could foster a sweet loving friendship. I wasn't the prettiest girl in the class and Hock Kee was no potential Fabian. But we just liked each other and we showed that we did. We were not aware of our differences of colour and race - just 2 children who were fond of each other,

Years later after my A-Levels, I was given the very sad news that Hock Kee had passed away from a brain tumour. This posting is for my very dear friend Ang Hock Kee. I still remember you most affectionately and for always.

From our Primary One Class Photo

Aiyo poor Hock Kee, boh gay because of you.

AsH,
Thank you for the lovely journey into the past. I love playing with saga seeds and had a huge collection which I stored lovingly in a clear glass bottle. We had so much fun playing with simple things like that as well as with rubber bands, buah getah, flattened 'orang spot' bottle tops etc. Nowadays its all Barbie dolls, little pony, Ben 10, transformers...all costng a lot of money.
Regards to you both.

Dear Sunnysideup, A quirky twitch caused your comment to be deleted. Sorry, Wish I knew how to retrieve it.


Dear NanaDJ,
Yes indeed I agree with everything you said. It's all money, money, money nowadays.
I kept my saga seeds in a clear bottle like you did - for 16 years.

Sunnysideup,
Though I've lost your comment I would like to say this.
So it was you who made us lose our collection of saga seeds. Fancy stuffing it up your nostril - Nah and I should have stuffed you in the jamban and throw away the key.

Have you ever tried fried saga seed. You better do cause we did that all the time those days. It taste like kacang puteh. SEDAAAP

I really enjoyed reading your blogpost and especially this write-up! Reminds me of those bygone days... I'm sorry it took me so long to discover your blog.I hope you are still writing.

What a nice surprise - to find someone who enjoys my postings from so long ago.

Thank you for the kind comment. Geriatrics like me find more pleasure in the 'bygone days' than in the crass present days, I still write but not as frequently as in my earlier' 'posting' days.