I have to show off another masterpiece. 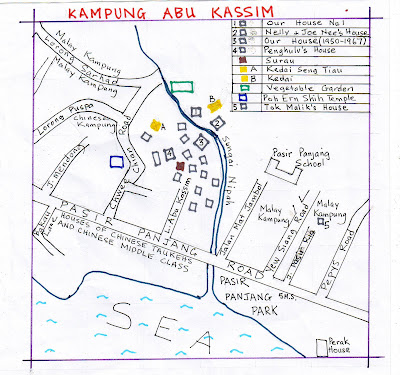 In the above map, the location of the houses in Kampung Abu Kassim and that of Sungai Nipah is based on my memory and my geography. Of course in present day Singapore, Pasir Panjang's sea-front has been deformed into wharves and container ports and all the kampungs have transmogrified into middle class enclaves. The Buddhist temple is still there and Pasir Panjang School is now named Breakthrough Mission, a Christian church/mission house.
Our family moved from Kampung Chantek- off Dunearn Road- to Pasir Panjang sometime in the latter part of the 1940s, around 1949-1950. Our first house in Kampung Abu Kassim was a rented house. It was not the typical Malay house on stilts but it had a cosy verandah and our own indoor well. I remembered the shivers from being given a morning bath at that well. Sungai Nipah was right in front of our house and I recollected rescuing a chick that had fallen into the river. But there was also the frightening experience when I saw my sister, who was carrying our youngest brother, stumble into the river. Shouts of panic from me brought the adults to the rescue and the two of them were none the worse for wear. In those days, older sisters and mothers would carry babies and toddlers on their hips and it is very easy for a little girl to lose her balance while taking her adek (younger brother/sister) for a walk. 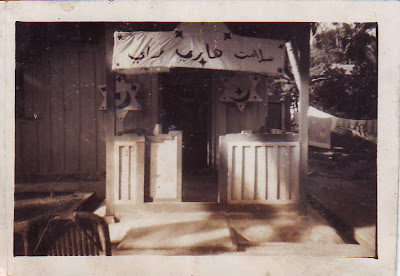 This photo of the verandah was taken on Hari Raya Day as can be seen from the banner and the 2 stars - all made by my ever-so-clever Abah!! 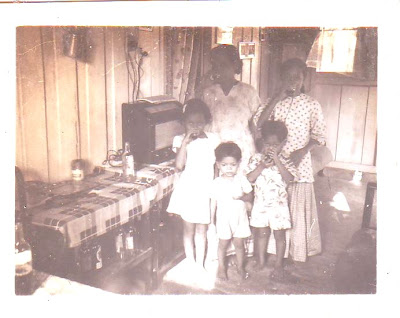 This is the sitting room where the radio had pride of place. My mum and helper are in the back row. In the front from left to right are Maznah, Mustapha and Maznoor wearing the most up to date kiddies' fashion - made by my ever-so-clever Mum!! We were all posing with a glass of aerated water in our hands. It must have been Hari Raya as can be seen by the bottles under the table. Cheers and Burp!

This is one of my very favorite songs by P. Ramlee not only because of the lyrics and the melody but it reminds me so much of my parents. 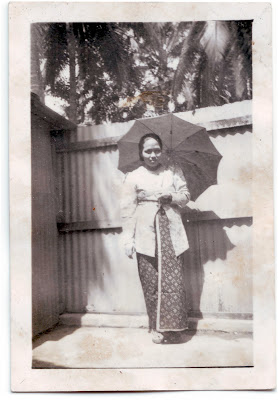 My Mum posing in her kebaya outfit in the backyard of the house. 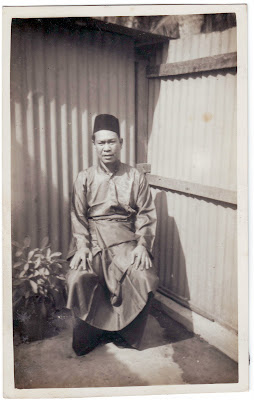 And Abah in his Baju Melayu.

Their outfit is similar to that of Zaiton's and P. Ramlee's. I especially approve of the high songkok and the siput sanggul (coiffured bun) which was the fashion in the 50s. All her life my mother never cut or permed her hair. She kept to that style until the last few months of her life when it was not practical for her to keep her thinning but long hair. I used to admire the way she combed and tied her hair into her siput sanggul and try as I might I could not do the same when my tresses were thick and long, many many moons ago. I still keep a couple of her hairpins and the black hairclips that we kids used to keep our hair neat. But that was before Brigitte Bardot came on the scene and 'let her hair down'.
Also I love the name Mahani. That was my Ma'Long's name and she named her daughter Mahanum. Really beautiful!!!

Little drops of water, little grains of sand.
Make the mighty ocean, and the pleasant land.
So the little minutes, humble though they be,
Make the mighty ages of eternity.
Julia Carney (1823-1908)
And the last words, from Abah which he wrote in my sister's autograph book. 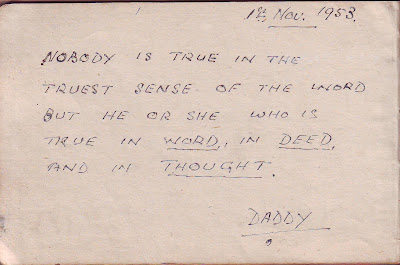 Reading and looking at your old photos make me feel so, so sayu. I really enjoyed reading this and listening to P.Ramlee. All those people in our past, God bless them all.

Salam...
Thanks for sharing the pictures and your daddy's words. Your walk down memory lane makes me feel the need to return to Malaysia real soon...to go through my own *treasure chest*.

Oh I remember the rikety bridge we had to cross whenever we go to scool or to the other Chinese provision shop.
When they changed it to a more sturdy bridge, that was a symbol of progress in that kampung.

Remember how we used to get to the end of Chwee Chian Road to walk up that hill behind our house and the stron smell of sago used to turn us off ??

Awang Goneng,
It feels wonderful to know you have the same wistfulness for life long ago. But that is what GIT is also about isn't it?
Bit I have to be careful to tread the narrow line separating nostalgia and self-indulgence.
As an ex Singaporean Malay, I feel the need to write about our life pre-LKY before our story gets massaged and manipulated by Big Brothers.

Naz.
Thank you for popping in. At my age I need to record the past for the youngsters and for my siblings. We have always depended on oral history but life has changed and our terms of reference must also change. Do look up your treasure chest but remember you are also living more memos today for the future.

Sunnysideup,
Thank you for reminding me of that state of the art bridge and the smelly sago factory.
Your recollections of the singing bamboo leaves are beautiful. Today we take a lot - in nature - for granted.

i enjoyed your story,please tell us more.

Heres one more. Before LKY even thought of reclaiming land from the sea by depositing sand , Abah had us doing that in the backyard way before he even became PM.

Remember behind our house ? It consisted of black marshy soi with that little 'mole-hills' all over the place. They were the home of that small creature that can only live on wet, dark marshy soil.

The river was ver close to the back portion of our house.

Trust Abah ! He had us bring up soi from the river and I believed he also bought a few lorry load of sand from the timber shop at South Buena Vista Road. Later , he build the extensin to our main house on this claimed land.

Of course to fight the flood, he had us scoop sand from the rive and raise the level of our land. Mak was the stalwart of that operation. She was the mandoe, the slave-driver and the labourer as well.

The kampung folks used to wonder just what this family was up to. In the end, they just gave up and allowed Abah with all his innovations !

Abah's innovations---that would be something for you to dig int !!

Yes,a provision shop along jln pasir ria, I think there was a mosque at the end of that Rd.

Yes, that provision shop was where we grew up.
There was a mosque at the end of the road.
Currently, there is a pasir panjang east neighbourhood committee, which is interested in getting current and former residences of this area to contribute their experience and having them documented.
They have done a wonderful job in liaising with the relevant ministry to enhance the Pasir Panjang neighbourhood.
If any of your friends or old neighbours are interested, I can put you to the chairman of the committee.
Tks and regards
Tan BH