Liberte, Egalite, Fraternite is the Motto of the French Republic.

This 23rd President of the French Republic has been very vocal about implementing his nation's motto for the benefit of Muslim women in France.
Here he is in June 2009, striding in the grand Palace of Versailles to deliver his speech to declare the burqa illegal - as it represents a form of enslavement. 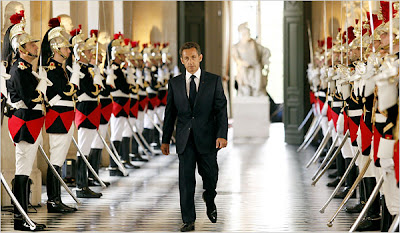 Picture by Benoit Tessier/Associated Press
Before this, in 2004, the French passed a law prohibiting head scarves and other conspicuous religious symbols from public schools. So where is French Liberte if the President and the French Government are allowed to control what women can wear in schools and in the streets?

In October 2008, it was reported that a voodoo doll of the President had to be withdrawn or else the makers would be sued.
Read this
Well, the voodoo worked. He lost the case.
He is very protective of his right as to his appearance in the eyes of the public but this privilege is not to be extended to the Muslim woman.
Mr Sarkozy however, is inspired by his desire to control "extremist and radical" forms of Islam and one way is to prohibit the hijab and the burqa! Furthermore he claims that France's war in Afghanistan is a battle for the freedom of women in that benighted country!!!

But here comes another challenge. On October 12 , the French minister of culture, Frederic Miterrand, clamoured for the release of Hollywood film-maker Roman Polanski from a Swiss jail before extradition to the US. Polanski, in 1978, had escaped prosecution for having sex with a 13 year old girl in California. Also at the same time, it was revealed that this member of Sarkozy's government - in an autobiography "The Bad Life", released in 2005 - exulted in recalling his adventures with Thai rent boys. His exploits are described by Mitterand as "a mistake, certainly, a crime, no." He just got into the bad habit of paying for brown boys. "All these rituals of the market for youths, the slave (my emphasis) market excited me enormously....the abundance of very attractive and immediately available young boys put me in a state of desire."
It seems that 67% of the French want him to keep his post and up to today Mitterand is still the culture minister.

Don't they prosecute paedophiles in the French Republic? Aren't French choir boys protected from such predators? The conclusion is - Liberte, Egalite, Fraternite is not for Muslim women or Thai boys!