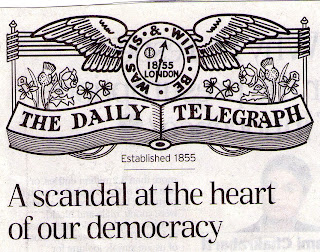 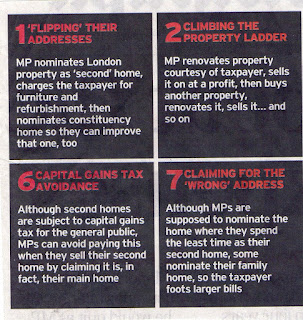 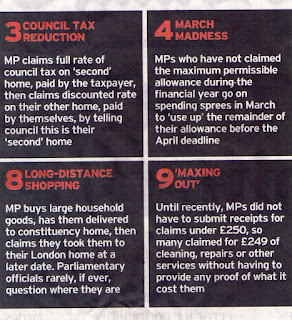 "It is a story that our readers, indeed the whole country need to be told. Now for the first time, it can be." Editorial, Daily Telegraph, Friday May 8, 2009.
What story is this? Another spectacular from Westminsterwood? Is it about a man or a bird? Like Superman.
No, it's all about the British Parliament's , you know- that Mother of Parliament's MP's Expenses - the misappropriation and abuse of public funds - of snouts in the trough, almost like a new strain of swine flu.
It's not summer yet, but we're seeing a lot of red faces from the PM and his Cabinet, from the Conservatives' Shadow Cabinet, and an assortment of MPs from all the political parties. The muck has been dripping over the weekend to today. It took a long time coming.
I think it is a saga and scandal worthy of a Banana Republic from the land of the 'nig-nogs' like they used to say.
It is corruption and greed usually attributed to authoritarian, autocratic, oligarchic, fundamentalist regimes of the brown, yellow and black varieties.
The moral of the story is: PEOPLE WHO LIVE IN GLASS HOUSES SHOULD NOT THROW STONES.
And from Percy Bysshe Shelley :
When the lamp is shattered,
The light in the dust lies dead-
When the cloud is scattered,
The rainbow's glory is shed.

Shouldn't these buggars be dragged to court for fraud , cheating, misleading and what have you >????
Come on Britain--- you're so phucking good at talking about justice for the people in other third world countries !! Practice what you preach !

As to the britishers ---so what are you all going to do about this > Let them go scotfree ????

SHAME-ON THE MPS FOR THIS LOW-DOWN ACTS.

AND EVEN MORE SHAME TO THE BRITISH--IF THEY ALLOW THESE CROOKS TO GET AWAY !!!

The Brits are the biggest hypocrites, besides other Anglo-Saxon and European 'democrats'

They've been caught with their pants down and all they cry is "we did it within the law" - just like the way they invaded Iraq and Afghanistan!!

The lesson here is for the 'brown sahibs' in our part of the world to realise that the heroes and standard of the west thay they are so enamoured with are just myths and a figment of the imperialists' delusion. Corruption? cronyism ?
it's all there if these sahibs would only search.

These crooks will get away except for some who are so utterly corrupted. Somehow, I believe if these revelations had been made in the Parliament in Japan there would be a fresh election.