Sugar and Spice - but Something's Not Nice 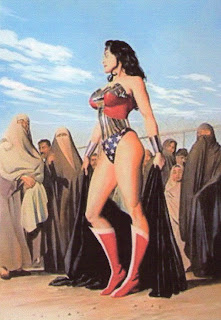 Yasmin Alibhai Brown of The Independent has been on my List of Favourites for a very long time. She has always been consistent in exposing the double standards of the West in their attitude towards Muslims and Islam. The fact that she writes for a mainline paper like The Independent ensures that there is a counterfoil to the nasty bigotry of the tabloid press. Muslims in Britain have a good friend in her.

However, her article on May 4 2009 left me a little concerned and a tad disappointed.

I cannot make the link but you can find this in The Independent : "Who'd be female under Islamic law" by Yasmin Alibhai-Brown.

YAB was obviously very upset at the plight of several Muslim women from Iran and Saudi Arabia. Iranian painter Delana Darabi, "accused of murdering an elderly relative" was hanged last week. She was only 22. Roxana Saberi,an American-Iranian journalist of mixed Iranian-Japanese parentage is in Teheran's Evin prison accused of spying for the U.S. A noteworthy (?) feature of this journalist is she's "intelligent, beautiful and defiant". Should these attributes make any difference to her cause?

I am no apologist for the misogyny of Muslim males who have subverted the teachings in Islam to suit their narrow political-cultural agenda. I mentioned this in my posting of Tuesday Oct 21, 2008. However this 'patriarchal oppression' of women also occurs in the domains of Hindu, Buddhist, Christian, secular and animist cultures. But the "Renaissance man" does exist in Muslim societies whether they reside in Britain, U.S.A , Malaysia or Indonesia. I like to think that my late father (born in 1910) was the first Muslim Malay male 'feminist'. He made sure my sister and I received the best education possible. I shall never forget what he said to me after I graduated from the University of Singapore : " I give my daughters the best education I can provide because I do not want them to be dependent on any man."

I feel YAB's distaste for the Saudi father who sold his child to be married to a 50 year old man. Then there's the Saudi TV anchor who was beaten up by her husband and several other examples of a 'dark age' looming in the Muslim world. A dark age is upon us indeed when we look at the environment, the economy, the widening gap between the rich and the poor in developed societies and between the western and non-western world. If we connect our concerns and ethos only to these murky examples from the Muslim world, we are neglecting the voices of the oppressed in the non-Muslim world. I deliberately prefer the word 'Muslim' and not 'Islam' when referring to these 'dark'societies. I recall visiting a Parsi homeopathic doctor in Bombay (Mumbai) many years ago. He quoted a well known western writer but I can't remember who. It went like this : "Islam is a good religion; shame about the Muslims". That little anecdote from this wise Parsi has given me succour and strength through all these years of having to endure vile Islamophobic rantings. The problem is with the practitioners not the Belief. The focus on demonising Muslims AND Islam especially has a long pedigree in western Christian/secular cultures. Their choice of demons and monsters is very selective and self-serving.

But back to YAB. What saddens me most is her analysis of the wife "burkaed on a sunny day", who is likened to a "dead, buried" ghost, a degraded piece of humanity because she has failed her fellow Muslim women in refusing to give up her burka and emulate her 'free' western sisters. How condescending; to assume that this burkaed woman is incapable of sharing and delighting in the pleasures of watching her husband and children laughing and playing on a sunny day in a park in England.

Esther Gordon, a British-Antiguan, is a very good friend of mine, much loved by both of us because she carries no bigoted baggage. She's very broad-minded and kind to all. She has a mind of her own and doesn't suffer fools. During one lunch break at our place of work at the Leicester Royal Infirmary, she told off our colleagues, mainly white and Asians including a Russian emigre, "Why can't you leave them alone, what harm have they done to you?" and she walked out of the room. These colleagues had been bitching about these women in black, in their 'bin bags' - a bit like the kind of smut you get at a BNP (the ultra right wing British National Party) gathering.
Esther, I will never forget your bravery and sense of justice. As a Muslim, I feel ashamed and humbled.

YAB seems very disheartened. "Progressive believers " she writes "tilt at windmills driven by ferocious winds of self-righteousness". But such Don Quixotes are not confined to self-righteous Muslims only. We, Muslims and non-Caucasians, who have lived long enough in this 'land of the free' have also had to suffer the onslaught of non-Muslim and Anglo-Saxon self righteousness.

Only the other morning on the pukka liberal BBC Radio 4, John Humphreys said this of China : "They are good at making cheap mass products. Can they make anything cleverer?" Nudge, nudge, wink, wink. Aren't we witty?

P.S. I am not burkaed or hijabed. In England I am garbed in the best outfit that my favourite Charity Shop can provide AND I do get the best, like an M&S jacket for
£1.50. I do get taken for a Chinese takeaway lady, but that's fine with me. When I attend some political meetings, I let the bigots spout whatever prejudices about Islam they want to spout ..... and then I come down on them like a ton of bricks! This
middle-aged, white-haired Malay Muslim woman really has fun.
Posted by anak si-hamid at Wednesday, May 06, 2009

that feeling of satisfaction, reading the way you return their ball, splendid.

proud to be malay too.

Thank you Kamal,
In my experience of living in Britain I have seen too many examples of our young cringing away from attacks on them and their faith.
I hope to carry on being of use to those who want to listen and I'm happy that you feel proud and satisfied.

Hello Mak Ngah,
Islam is like a complete, beautiful, wonderful palace. However we can't avoid those with tunnel vision, who will just focus on its toilet bowl and how it smells just before you flush it away.

I think we should give away toilet bowl covers to all those who cannot and will not live with Muslims and Islam as their neigbours.

(I thought about this idea because I remembered the present you gave to little Nadia .. and you're still a rotter for doing that)

Mak Ngah,
I beg to differ.
They don't deserve the cover - they should get nothing less than the thingy that normally goes through the seat.

But you're still a stupid boy!

Nadia's blossomed into a lovely girl and it has nothing to do with you - the credit goes to Sabrina.